A Discourse on the Wonders of the Invisible World 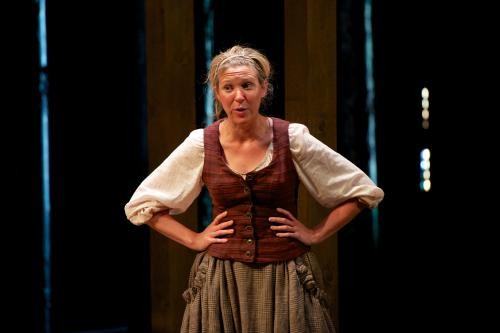 Here is Cassie Beck as Mercy Lewis with that constant hands on hips pose. Photos courtesy of CATF. 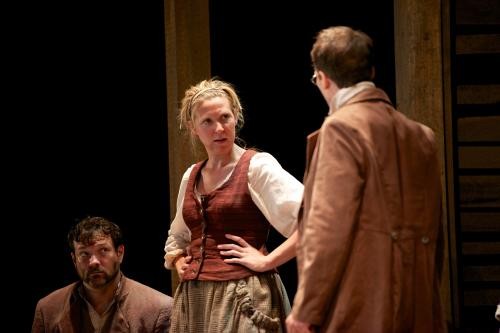 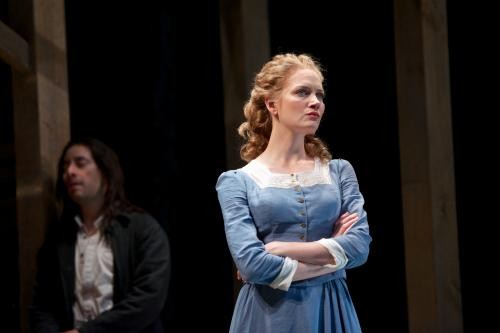 The lovely and talented Susannah Hoffman as Abigail Williams. 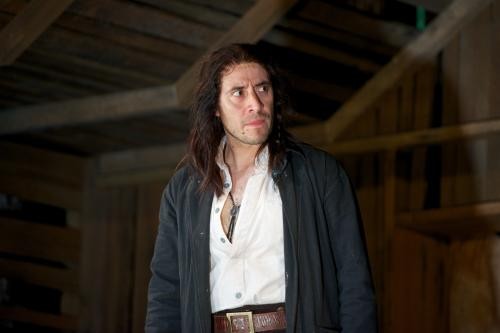 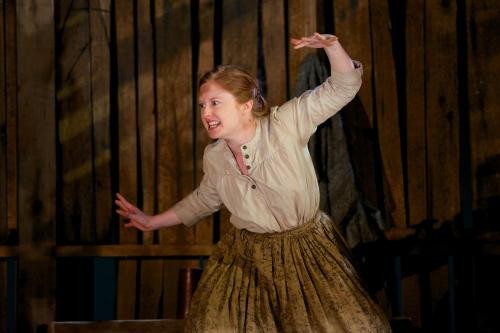 With a world premiere of A Discourse on the Wonders of the Invisible World (a quote from the preaching of Cotton Mather) Liz Duffy Adams has undertaken the daunting task of progressing from the Salem Witch trials, as established by Arthur Miller’s masterpiece The Crucible, to imagine the fate of two of the hysterical young women a decade later.

The real life Abigail Williams (Susannah Hoffman), whose testimony sent the accused to the gallows in Colonial Massachusetts, disappeared before the conclusion of the trials and nothing more is known of her. After years of wandering from town to town, with no apparent means of support, she appears out of nowhere fit and well dressed for the time, at the doorstep of the cabin/tavern of her former friend/ accomplice Mercy Lewis (Cassie Beck).

We first encounter Mercy on the roof banging nails. That proves to be a plot point.

There is surprise and an uneasy exchange between the women.

It seems that Abigail has recanted and now feels that the condemned were not guilty as witches. Mercy, a hard liner, differs and damn them all to hell.

Their differences are so divisive  that perhaps it is best for Abigail to move on. But it is getting dark and the woods are full of critters as well as newly aroused and hostile Native Americans. Reluctantly, Abigail is allowed to spend the night.

A tough, God fearing, pioneering woman Mercy scratches out a living. How the well dressed and mildly prosperous Abigail does so is a subject of debate and leads to her possible demise.

The strident Mercy barks to her indentured servant, the diminutive and likely adolescent Rebekkah (Becky Byers) who is all a quiver. She plays the role with compelling shock value.

Two men arrive, the fanatical fundamentalist Reverend Peck played by Joey Collins. (Weren’t they all in a colony under the spell of the fire and brimstone preacher Cotton Mather). And his ruffian companion Judah (Rod Brogan).

The Witch Trials have come to an end by decree of the Massachusetts Bay Colony’s Governor John Winthrop.

But preacher Peck is convinced that yet again there is an outbreak of devil worship and sorcery.

By her own words, and ambivalence about her former alleged seizures, Abigail condemns herself as in league with Satan. Peck demands an immediate trial with presumption of guilt to be followed by hanging at dawn.

Enter the mysterious dark stranger John Fox (Gerardo Rodriguez) who takes Abigail’s side and is soon accused as well.

The trial proceeds as anticipated with certain execution but Fox has other ideas.

The first act ends with a flash of magic as the two accused seemingly vanish.

Is he indeed a devil?

There is a sense of excitement and anticipation as the play has become more interesting.

That notion is soon squelched as the second act unfolds.

The magic was just a bit of deftly applied gun powder.

Now dark the condemned couple have taken to hiding on the roof and pulled up the ladder.

With these two interesting characters now stuck up there till dawn the play just disintegrates. There is a sub plot of the indentured servant being sold as a “bride” to Jake who has his brutal will on the innocent girl now whored. She comes to a sad end.

While in a lot of confusion Abigail and John, now potential lovers, slip away at dawn.

This is a play that may work with significant changes.

For starters get the accused off the roof. It is static staging to just freeze two characters.

There is also a need for more clarity on the motivation of the roughly drawn characters.

The most interesting character at this point is John Fox. It seems that he is a half breed whose village was wiped out by small pox. He is now a stranger in two worlds but combines a wisdom of both. That earned him thirty pieces of silver as a scout who participated in the slaughter of his people. Both as a character and performer Rodriguez held our attention.

During CATF actors are cast in two productions when possible.

It was interesting to see Scott and Hem from the Mark St. Germain play here as the reverend and his loutish friend. They were hardly recognizable without consulting the credits.

Susannah Hoffman is a stunning and subtle actor. She was quite wonderful as Abigail and equally intriguing as the mysterious, mute nurse in Sam Shephard’s Heartless.

The performances of Cassie Beck as Mercy and Lucy in Heartless were both frustrating. As Mercy she constantly struck the same pose as a tough woman with hands on hips, elbows thrust out, legs spread and planted. As Lucy she almost always crossed her arms in a protective, self hugging posture. Clearly, she needs to work on body movement and language. Directors need to break her of these bad habits.

As part of a festival of new works it is the norm to expect revisions.

If Adams starts by getting her fiddlers off the roof and down to earth, with some rewrites and bit less hysteria, this play may live to fight another day. It is indeed interesting to speculate why Abigail disappeared during the trial but so far this doesn’t seem like the right answer.