Rosencrantz and Guildenstern Are Dead in San Diego 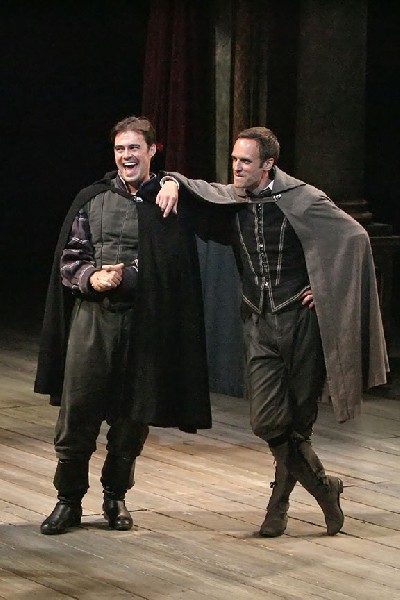 John Lavelle as Rosencrantz and Jay Whittaker as Guildenstern directed by Adrian Noble~Photo by Michael Lamont. 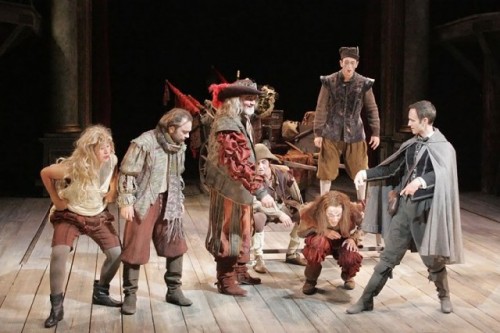 Jay Whittaker as Guildenstern (far right) with the cast of The Old Globeâ€™s Shakespeare Festival production Photo by Michael Lamont. 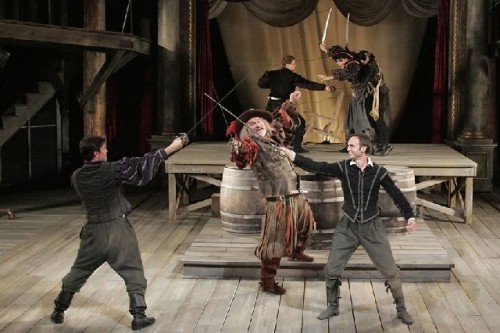 John Lavelle as Rosencrantz, Sherman Howard as The Player and Jay Whittaker as Guildenstern with the cast of The Old Globeâ€™s Shakespeare Festival production~ Photo by Michael Lamont.

For two gentlemen who are dead, there’s a heck of a talking going on at the world famous Old Globe Theatre during its Shakespeare Summer Festival which is currently in full sway.  One of the main reasons for all the gab going on is that the play is written by the verbal virtuoso of modern playwrights, the brilliant Tom Stoppard – who loves language with lots of words.

In “Rosencrantz and Guildenstern Are Dead”, Stoppard’s absurdist take on the Bard’s masterpiece “Hamlet”, has been hailed as a master work in itself, with “Hapgood” next, followed by the recent multiple Tony winning play “The Coast of Utopia”.

Sir Tom Stoppard (knighted in 1997) born a Czech, was educated and resides in Britain.  His writing-style has been heavily influenced by Samuel Beckett, king of the absurdist school of playwrights.  So it’s easy to see the connection between Stoppard’s lead characters of Rosencrantz and Guildenstern and those in Beckett’s masterwork “Waiting For Godot”.  Didi and Gogo are mirror images of Rosencrantz and Guildenstern.  Both plays deal with characters looking for the meaning of life, along with someone to explain it to them.  For example, they’re confused from the moment the play begins as to why and where they are going, or what they are doing.  It’s classic comedy of the absurd.

“R & G”, is a play within a play, so to speak, and full of ambiguity.   For some it’s too abstruse, others it’s just obtuse, but for most it’s just a funny intellectual romp and riff on “Hamlet” by the devilishly clever, witty, and sophisticated playwright Tom Stoppard.

Thank goodness we have Festival Artistic Director, the immensely talented Adrian Noble, at the helm to chart a course and navigate all the shoals, rooks, rills, and plot twists that a production such as “R & G” presents to the audience.

And thank goodness we have two superb acting talents that can translate Stoppard’s intriguing dialogue into an evening of high comedy with a dash of sophistication and elegance.  One is Globe newcomer John Lavelle as the blissful Rosencrantz.  The other is the Globe’s returning star, Jay Whittaker as Guildenstern (so memorable as Mozart in “Amadeus ” and so villainous as Richard III),

Together on stage, their timing and performances are delightful to watch.  I mentioned earlier that Stoppard loves the English language and its richness of vocabulary.  It’s one thing, to read lines, or worse, to fall into the trap of declaiming Shakespeare-style dialogue.  It’s quite another trick to bring the dialogue to life, and at the same time have it make sense to the audience.  It’s a tour de force evening for these two marvelous actors.

Whittaker’s Guildenstern is in a perpetual state of irritation because he’s not in control of his destiny. Lavelle’s Rosencrantz, on the other hand, is blissfully unaware of his fate.  It’s a little like watching a Laurel and Hardy movie, or the famous “baseball routine” from Abbott and Costello, only with far more dire consequences at the conclusion.  Brilliant as the performers are, they don’t bring off this entertaining piece by themselves.

Thanks to the company assembled by Noble, outstanding performances come from the supporting company of players; most notably from Sherman Howard as The Player, and the leader of an iterant troupe of players (remember, it’s a play-within-a-play just like in “Hamlet”) who knows the true mission of  “R & G”, and the fate that will befall them.  Howard’s take is comical, over-the-top, and a hoot of a performance.  “R & G”, however, being totally clueless, fail to tumble to what’s being said and/or suggested concerning their voyage to England with Prince Hamlet.  Triney Sandoval as the duplicitous and murderous King Claudius delivers another nice and energetic performance, but the evening, most definitely, belongs to Whittaker and Lavelle.

Ralph Funicello’s spare but functional set, especially the boat on the voyage to England, is nicely done and provides “barrels of fun” for the players in the fight scenes.  Alan Burrett’s lighting design once again comes through; enriching the various moods requested by director Noble.  Prepare to bring your thinking cap to this break-through 1966 work from Tom Stoppard.  It will help in keeping you engaged for the full appreciation of the production.

“Rosencrantz and Guildenstern Are Dead” is the third production performed in repertory in this season’s Old Globe Shakespeare Summer Outdoor Festival.  All three productions run through the last week of September.