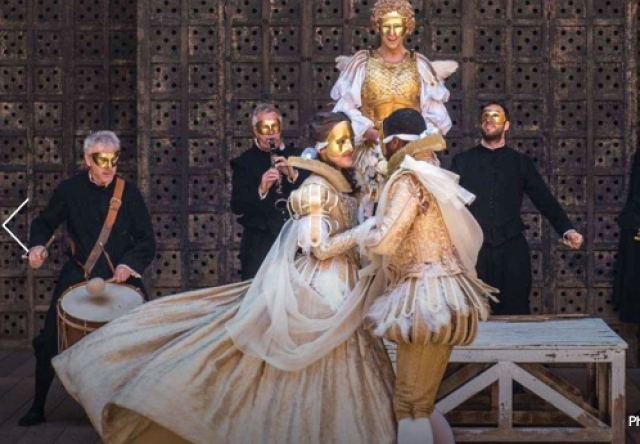 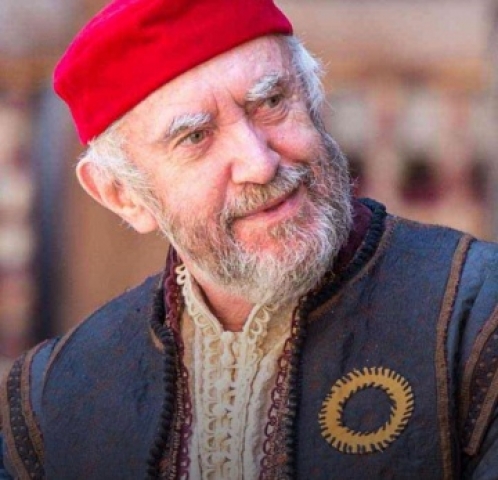 Jonathan Pryce, marked as a Jew by his red cap and yellow circle. 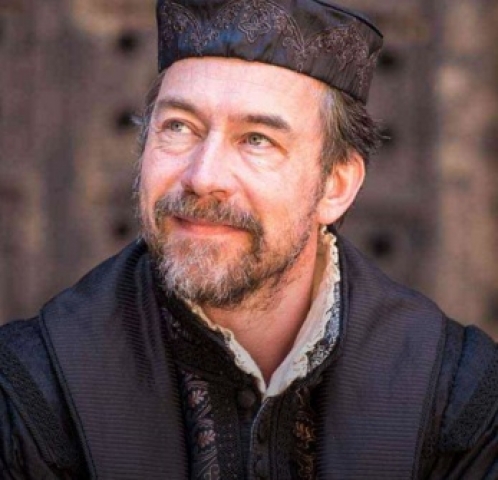 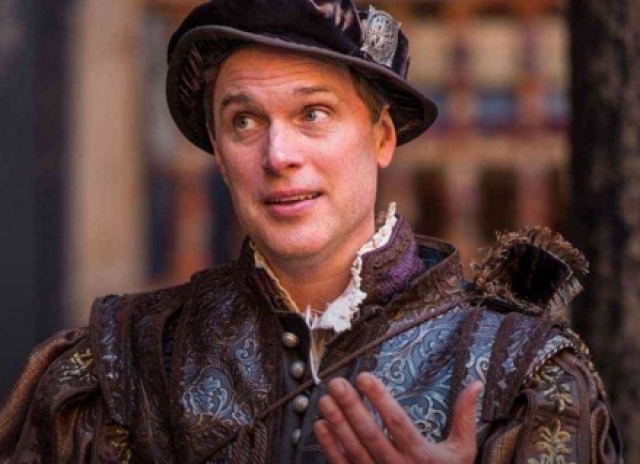 Venice is full of gentle men. 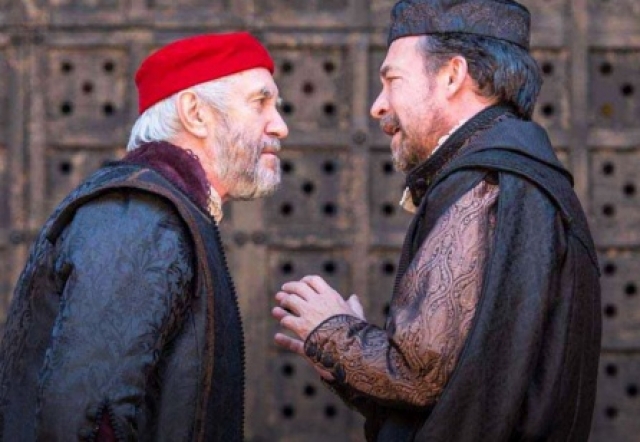 Pryce and Dominic Mafham, negotiting. The price. A pound of flesh.

The Shakespeare Globe production of Merchant of Venice is both true to what we know of the original productions in its inclusion of absent characters who appear in a character’s mind, and in its heightened treatment of issues.

Jonathan Pryce as Shylock is a man more preyed upon than preying. Jokes played on him are so cruel that they leave us with no impulse to laugh.

Lending money was one of the few professions open to Jews at the time. The fact that Shylock charges interest is the mortal sin of usury.

Yet finance is central to all relationships in the play, including ‘love’ relationships. Portia will not get her inheritance until she complies with her deceased father’s wishes.

Shylock's daughter Jessica is disinherited because she marries a Christian. Another Christian intervenes to insure Jessica’s financial well-being.  In a nice turn, Jessica is played by by Phoebe Pryce, the daughter of this production's Shylock.

What draws us in to this production is the compelling staging. In Shakespeare’s time props were few and far between. At the Rose Theatre props and sets are suggestive. The opening moments are full of a Venetian carnival, with women selling their natural born wares, music, boozing and vitality. Fires are lighting the streets.

The house lights do not dim as the play begins. Instead the audience is made very much part of the show, two of them are actually brought onto the stage for teasing. Fingers are pointed at us, to make us more complicitous in the goings-on.  Who among us has not cast a first stone?

Ten spotlights formed by severely acute angles that smoke as they descend, pick out the character of the moment.  The tiny windows which form a Venetian homefront, also hide behind drapes at Belmont, Portia's home.  We see that these worlds are not so different.

The role of Antonio seems deceptively flat. As Antonio, Dominic Mafham get the opening lines of the play. “In sooth, I know not why I am so sad.” Without defining homosexuality, a term not used in those days, we discover that Antonio is competing with Portia for Bassanio’s love. Antonio bends in to kiss Bassanio, who lightly flicks him away. How sad, as Mafham draws it.

Dan Fredenburgh creates Bassanio, one of the straight men bolstering the drama. He seems appropriately weak in relation to Rachel Pickup as his wife-to-be, Portia. Left in the long arms of her deceased father and having to subject herself to his challenge to a successful suitor, Pickup figures out how to get her man, keep him, and make sure his particular friend is cared for too.

It is all about money and rings. If Shylock is in the grips of the deal, so too is Portia. In fact, all the couples are negotiating love and money in the same breath. The texture of love here is no different from the texture of commerce.  Portia calls Bassanio 'dear bought.'  Shylock says his pound of flesh is 'dearly bought.'

Stefan Adegbola (Lancelet Gobbo) as Shylock’s servant is a clown, but a loosey-goosey one who cracks up the house. He plucks from the audience to draw us ever closer to the proceedings.

We are prepared for the actualization of thoughts and events which are only mentioned as characters stride the stage in the speaker’s imagination.

The final coda is a projection of an event anticipated by the playwright, but not spelled out. In a formal baptism of the Shylock, who must become a Christian as punishment for his contemplation of the death of another human, the horror of what has happened to the man is grotesquely magisterial in Catholic ritual. Shylock wears a white gown, bathed in white light, but his purification by water disgusts.

On the side of the stage, Shylock’s daughter Jessica sings a Kaddish mourning song for the loss of her father as Jew. It is an ineffably moving moment.

Man’s cruelty to man is central to this comedy.  This production wraps the audience into its web with humor, shock and awe.