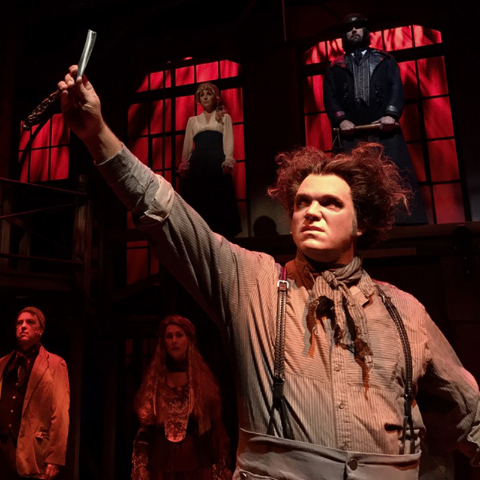 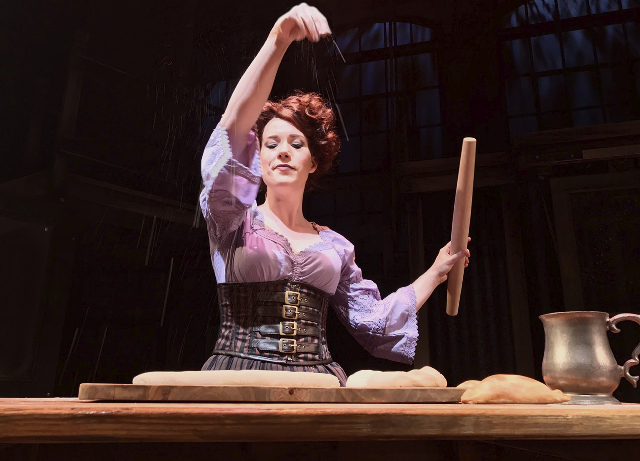 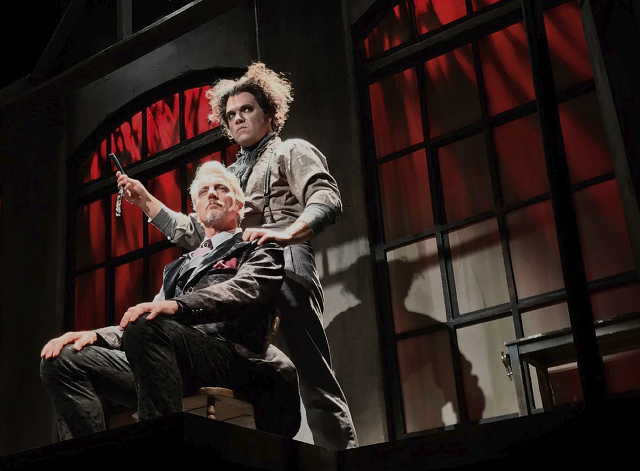 How do you sympathize with a barber who slashes the throats of his customers, instantly killing them and sending their remains down a chute for his partner-in-crime to bake them as part of meat pies?

Here’s one way: Attend the riveting, chilling and altogether well-done Palm Beach Dramaworks’ production of Sweeney Todd: The Demon Barber of Fleet Street. A fine cast, backed by skilled live musicians, performs it on PBD’s intimate stage and auditorium, making it that much more powerful.

Furthermore, shouldn’t a summer show feature lighthearted, escapist fare that doesn’t force the audience to think? But PBD’s mission isn’t to stage fluff --- and obviously, producing artistic director William Hayes and Co. weren’t about to use a summer musical as an excuse to produce a “feel good” piece, sending audiences home warm, cuddly and fuzzy. No, for this summer at least, PBD stuck with its mission of producing “Theatre to Think About.”

Sweeney Todd offers plenty for audiences to think about: The danger of taking the law into your own hands, the pitfalls of obsessing about vengeance and the past, the treatment of working people, how a development such as the Industrial Revolution can affect that treatment, and how to act in moments of terror.

This isn’t about the kind of terror that delights little candy-grabbing ghosts, goblins and ghouls every Oct. 31. This tale isn't just a freaky haunted house spectacular. Of the many genres into which you could classify Sweeney Todd, horror certainly figures into the mix. There are moments when the characters are seized by real terror, as in I just heard or smelled something strange; is an explosion or worse imminent?

Sweeney Todd might take place in 19th century London. However, the recent terror attacks in that English city gives the show a frightening relevance in 2017.

PBD’s cast vividly captures the unease, darkness, romance and comic, breezy elements of this cautionary, hair-raising, thought-provoking and highly-entertaining tale. Credit director Clive Cholerton for giving equal weight to the darkness and light-hearted (some of it pitch-black comedy). His attention to detail and smart staging help make this production one of the most mesmerizing you will have seen this theater season.

This production isn’t out to shock you or send chills down your spine merely for the sake of it. If that was its purpose, the actor playing Sweeney would be little more than a version of the character of Lurch in The Addams Family.

Certainly, there’s at least one character who sounds like him. However, he’s part of the Greek Chorus-like narrators who, in song, comment on the action and do so with vigor. When Sweeney (a hulking Shane R. Tanner) enters for the first time, he’s sporting a bushy beard, wild, mussed up hair and wide, dangerous eyes. He resembles a Neanderthal and your first thought is I don’t want to meet this freak in a dark alley at night.

But as the production progresses, director Cholerton and Tanner show us a man full of feelings and vulnerability. He eventually sheds his beard. We can clearly see the anguish, hope, desperation, frustration, gentleness, optimism and even polish of this man. Sure, Tanner conveys a dark, dangerous, brooding demeanor at times, but this Sweeney is no demon.

Tanner, who has a booming, expressive voice, sings tenderly and lovingly about his daughter, Johanna – even as he’s slashing a customer’s throat.

Todd may belong in an asylum or worse. Sure, we don’t condone the murderous, revolting acts of Sweeney and Mrs. Lovett (Ruthie Stephens). But there’s a deeper meaning here. Look no further than the lyrics “It’s man devouring man, my dear,” for the symbolism behind the dead bodies in meat pies. Specifically, it’s the predatory nature pervading society when capitalism and a class system are in place.

Mrs. Lovett unwittingly becomes part of that dog-eat-dog world, when Todd steps into her pie shop. Such esteemed performers as Angela Lansbury have played this eccentric chatterbox.

We tend to love her because, well, she’s just so lovable in all her resourcefulness, spontaneity and diversity. One moment, she’s motherly, the next she’s calming an impulsive, frighteningly determined Sweeney and the next, she’s desperate.

Singing Sondheim’s intricate, tongue-twisting lyrics is hard enough, but doing so as Mrs. Lovett is a huge challenge. In the role, Stephens transitions between the character’s many emotions with seeming ease. Meanwhile, with apparent effortlessness, nails Sondheim’s difficult lyrics in a natural sounding Cockney accent.

Tanner and the sweet-voiced Stephens display great chemistry. So does Johanna and her love interest, Anthony Hope. That young man is played with wide-eyed wonder, dogged determination and intense longing by Paul Louis Lessard. His versatile, expressive voice will surely move you, as will Romeo and Juliet/West Side Story-like scenes between the two young people.

There’s more than a hint of menace behind Michael McKenzie’s proud, deceptively charming, calculating Judge Turpin -- the evil man of the bench who has taken Johanna as his ward.

The real demon in this production is The Beadle, Judge Turpin’s arrogant assistant. He’s played with a menacing aura by Jim Ballard, who turns him into a bully not unlike Bill Sykes in Oliver!

There are Dickensian elements in Sweeney Todd. Turpin eventually sends Johanna (an ethereal, sweet and lovely Jennifer Molly Bell) into an asylum for the crazed. You can’t help wonder what her crime was, other than singing the serene “Green Finch and Linnet Bird,” apparently too tender for Turpin and the Beadle’s ears.

Another nod to Dickens is the lad Tobias, who’s played with an innocent, obedient countenance by Evan Jones.

Tobias is aware of his dark world, captured skillfully in Michael Amico’s two-level, rusty, musty set. It resembles a type of gallows, with ropes and chains. The set is lit darkly by lighting designer Donald Edmund Thomas, whose use of red is effective to communicate danger and blood. The lighting is much brighter to suit more upbeat scenes.

The period costumes are mostly character-appropriate, though the dress worn by the irritating Begger Woman (a loud, annoying Shelley Keelor) is a bit too neat and fancy.

Sweeney Todd: The Demon Barber of Fleet Street is darkly delicious and captivating, even while its disturbing and revolting.

Again, there’s plenty food for thought – just make sure you can stomach it.