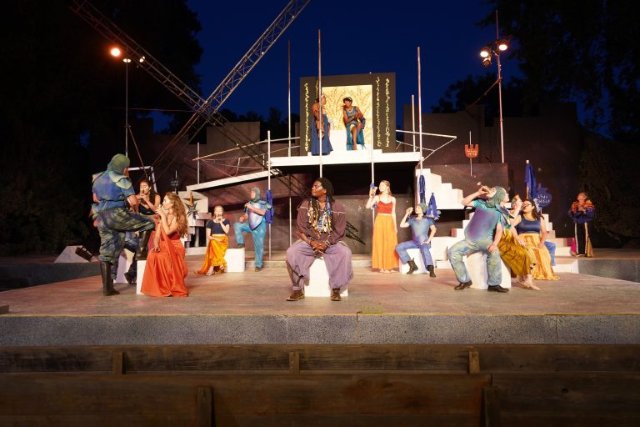 Pericles is one of Shakespeare’s least performed plays, so why should anyone want to see it? Perhaps the cynical response is in order to check the box on the way to seeing as much of the canon as possible. However, two commanding lead roles strengthen the script – Pericles the Prince of Tyre, and Gower, the storyteller. Several supporting roles resound. It also possesses a grand sweep, from storm of the sea to brothel. And when given strong performances and clever staging, it can entertain. Plus, even modest Shakespeare possesses qualities that are difficult to match. Marin Shakes’ production finds and develops the play’s strengths to make for an interesting and enjoyable experience.

The storyline of Pericles is the odyssey of the title character. It shares devices with other Shakespeare comedies, such as Twelfth Night’s shipwreck separation of characters then thought dead. But in the clever opening challenge, opera lovers will find what may have been the inspiration that ultimately led to Puccini’s Turandot.

Seeking a wife, Pericles travels to the land of King Antiochus who fatuously offers his beautiful daughter to anyone who can solve a riddle but death to he who fails. Pericles gleans the answer but also learns that father and daughter have an incestuous relationship that would be exposed by answering correctly. Realizing that Antiochus will now have him killed, he begins his years long journey to avoid the king’s henchman.

Dameion Brown has been groomed for lead theatrical roles starting with his participation in Marin Shakes’ exemplary Shakespeare in Prison program. He has become an estimable Shakespearian and represents a strong, noble Pericles. Oddly, the other role with big face time is Gower, the story teller, who often returns to set the stage or fill in the blanks. Played by a delightfully jaunty Diane Wasnak, you’d be forgiven to describe her as puckish, as she has played the role of Puck as well.

Along the way, Pericles faces trials, but after many years, his abandoned daughter becomes threatened as well. Similar to As You Like It, Marina is persecuted for the sin of outshining the monarch’s daughter. Abducted by pirates, she is sold to a brothel. These events produce the most colorful and engaging scenes in the play, including an iconic supporting performance by the gruff but funny Rod Gnapp.

Although the script clearly speaks from ancient Greece, director Lesley Shisgall Currier, has created an ambiance untethered to a specific time or place. Merissa Mann’s often garish costumes are an omnium gatherum of styles and colors. The highly suggestive reds and blacks in the brothel scene that contrast with Marina’s dainty frock are particularly effective. Interesting fight choreography comes from Richard Pallaziol, including the recurrence of similarly clad ensemble members using fighting sticks to add sound and motion. These elements all combine to create a lively look.

Make no mistake, Pericles contains deficiencies that are worth discussion. Not listed in Shakespeare’s first folio, most scholars agree it was only partially written by the Bard, which may explain its lesser flair. Best estimates suggest that about half of the script comes from the pen of George Wilkins. Also, the play is neither fish nor fowl, and it is variously categorized as problem play, history (as the title character was a real person), romance, or most often, as a comedy.

The play seems static at times, as many significant events are described by Gower rather than performed. Unlike some of its ilk, this one contains so little inherently humorous circumstance or language that it can be played as a straight drama. It does however have an exceedingly complex storyline with unlikely incidents and a happy ending, consistent with Shakespearian comedy. Creative direction and acting, which this version has, are necessary to unearth its comic possibilities.

Particularly in the early parts, Pericles delivers monologues that drag on. And while eloquent language abounds, it lacks the famous quotes that highlight many Shakespeare plays. Yet, tucked away in one of those long speeches is a most timely and ominous portend that resonates to a nation largely frightened by its failure to ensure that its enshrined principles and institutions are upheld. As Pericles says, “Tis time to fear when tyrants seem to kiss.”