The Song of Summer by Lauren Yee 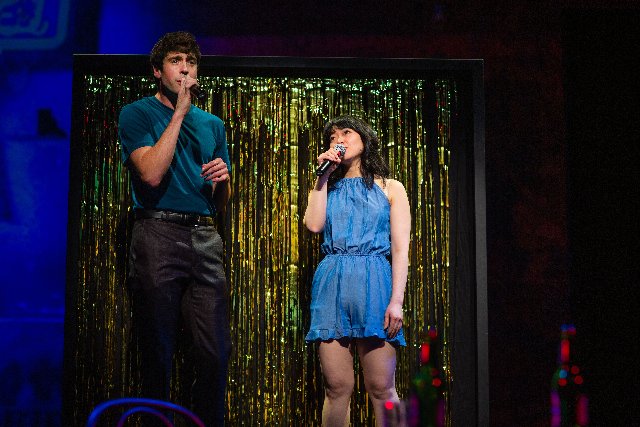 Nostalgia, that palpable yearning for past days of youthful enthusiasm and innocence, comprises the sights, sounds, and smells of those special times.  But a frequent trigger of those warm feelings comes from the soundtrack of the time.  Playwright Lauren Yee taps that vein and beyond with “The Song of Summer.”  With a nod to the music, the playwright takes a charming and humorous look at the relationships and trajectories of our lives.

Ever self-effacing Robbie has stumbled onto the brink of success.  While bartending in Tacoma, the bar’s manager, Joe, sees the potential of a song that Robbie introduced to him.  He organizes Robbie’s recording it, and it rises to become the emotional timestamp which young people would most associate with that summer.  The song’s popularity spawns a national tour for the nascent star, but when he receives boos at a North Carolina concert because some consider his lyrics “rapey,” he bails without notifying anyone.  His escape is into the bosom of his former piano teacher in Pottsville, PA, a coal town where he had grown up until a dozen years before at age 16.

Who could portray Robbie’s nebbishy character more splendidly than Jeremy Kahn?  Eminently likeable, a talented musician, and nice looking, Robbie’s diffidence and lack of confidence leads him to repeatedly refer to himself as a 4 on a scale of 10.  As much as you like him, you want to make like Cher in the movie “Moonstruck,” and scream “Snap out of it!” and throttle him.

The piano teacher, Mrs. C, is delightfully performed by Anne Darragh.  Kind and supportive, she was more a mother to Robbie than his blood mother.  She is also a pack rat.  So when Joe, now Robbie’s artistic manager, catches up with him, Joe realizes that Mrs. C may possess information that could help benefit Robbie’s career.  Reggie D. White excels as the stereotypical artist’s manager – hyper, aggressive, and always keeping eyes on the prize, unlike the sometimes dreamy-eyed and ambivalent client.

And then there is Tina, who had a complex relationship with Robbie growing up.  She is the daughter of Mrs. C played wonderfully by Monica Ho.  Very grounded as an adult, but in a flashback sequence to high school days, she is revealed as ambitious, yet fun-loving, and adventuresome.  She also has a foul mouth that could embarrass a sailor.

“The Song of Summer” contains many stock situations, but they are written and performed with great flair, and the outcomes are not always as expected.  Importantly, the play’s subtext provides layers of depth that result in a thoughtful work.  Though the work doesn’t wallow in self-importance, this is not an episode of “Happy Days.”

Perhaps the most important underlying theme concerns the effects of random events in life.  People like to think that they exercise great agency over their lives, and often that is true.  The dominant life arc of some people may have few arbitrary disruptions, but for others, uncontrollable events create a trajectory as erratic as shots from a loose cannon.  Their lives are full of “what-ifs” – if a life-altering appointment weren’t missed; if a parent hadn’t died; if one hadn’t been required to serve in the military, all lead to radically different pathways of life.  In this case, what if Robbie hadn’t moved to Tacoma, an act over which he had no control?  What if Tina had seen the camcording intended for her?   But we are also reminded that momentous what-ifs occur from decisions over which we do exercise control.

Another key element is chosen versus inherited family.  Here, the caring Mrs. C acts as the nexus.  Although the central element of family is blood kinship, she demonstrates that water can be thicker than blood.  Tina did not come to her by birth but by adoption, though their bond is no different than blood relatives.  Robbie comes from a dysfunctional background, and Mrs. C was like a mother to him, who he felt comfortable returning to.  By design, the playwright specifies characters to have ethnicities - Asian (Tina, who is adopted) and Black (Joe, who had been a replacement singer in The Four Tops) to demonstrate familial linkages across color.

The play is also about going home again, and the way of life in small town America.  There is a clash between the traditional view of unchanging practices and values versus the realities of the modern day.

Although they are chalk and cheese, Kahn and Ho sparkle together as well as apart.  “The Song of Summer” moves along at a brisk pace, and Director Bill English’s clever staging allows for rapid set changes in the absence of intermission.  Given the play’s centerline, the show would benefit from having more punch in the musical numbers (especially the opening, but with the exception of the karaoke duet “Alone”).  That said, it is a well-acted and directed, fun and provocative play with a modicum of suspense that should appeal to a wide audience.

“The Song of Summer” written by Lauren Yee and produced by San Francisco Playhouse appears on their stage at 450 Post St., San Francisco, CA through August 14, 2021.