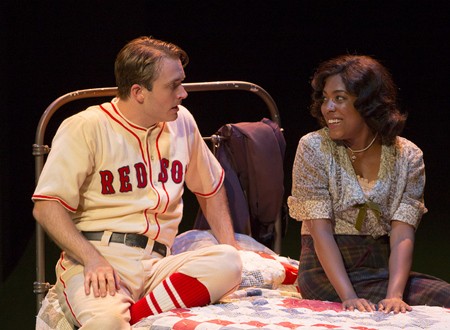 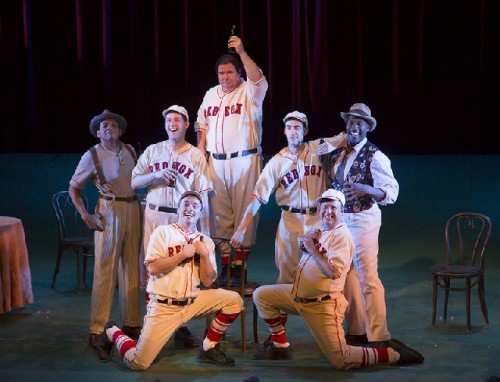 The boys of summer are a bunch of bastards. 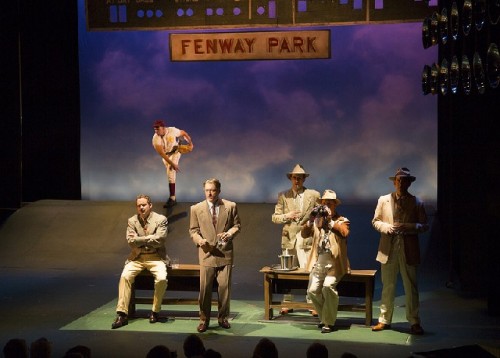 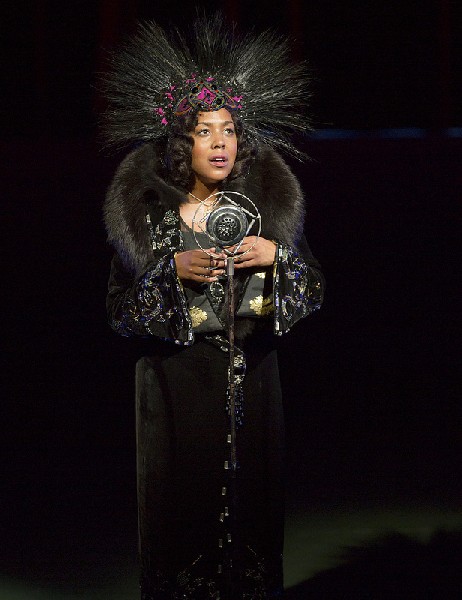 Daisy as a diva in Paris. 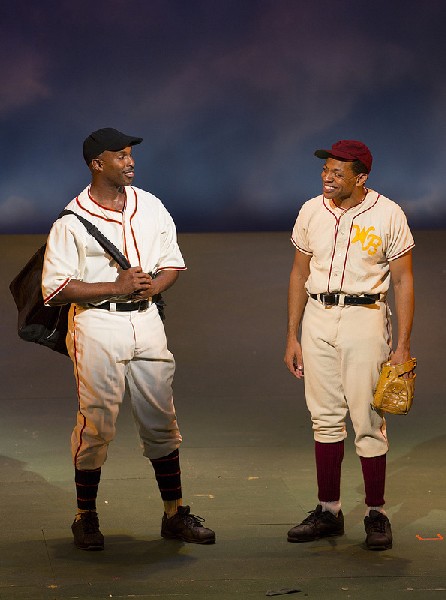 It was actually two years later when Harry Frazee, the owner of the Red Sox and a Broadway producer, sold Ruth to the New York Yankees for $100,000. The money was used to finance the show No No Nanette.

The Boston Globe sports writer Dan Shaughnessy wrote the 1990 book Curse of the Bambino. It is a reference to one of two nicknames for Ruth the other being The Sultan of Swat.

The Curse of the Bambino became an enduring mantra with long suffering Red Sox fans.

It’s where the musical Johnny Baseball, given an extreme makeover with half the book revived and several songs eliminated and added, begins on the smaller Nikos Stage of the Williamstown Theatre Festival.

With superb minimalist, multi purpose design (by Timothy R. Mackbee) it is being staged in what seems like a mini Fenway Park. There are banners along the aisles of past World Series wins.

Behind a popup wall a line of fans is moaning and groaning with every play of a decisive game in the 2004 series. They are down three games to zip. Big Papi saved the series which they went on to win by taking the next four. The hilarity and enthusiasm is rousing as they belt out “Eighty Six Years.” The scene is replete with a litany of players from the villainous Bucky Dent to the bumbling play at first base by Bill Buckner and the legendary gaff of Johnny Pesky. Or the much feared and still active Yankee reliever Mariano Rivera (he gets his own tune “Not Rivera” as the second act starts by picking up the 2004 series).

It was just fabulous as we settled in for what promised to be a thrilling evening of baseball and musical comedy.

Then there was a shift as we gradually learned why this musical is not called Curse of the Bambino but Johnny Baseball. Who the hell was Johnny O’Brien? Never heard of him.

His character and the love theme are a figment of the imaginations of the team of playwright Richard Dresser, and collaborators Willie Reale (lyrics) and Robert Reale (music).

We did not see the original American Repertory Theatre production in 2010 which premiered to mixed reviews and a controversial one by Louise Kennedy of the Boston Globe. Through interviews, however, we learned that the interracial relationship between Johnny O’Brien (James Snyder) and the blues/ cabaret singer, Daisy Wyatt (De’Adre Aziza), is now more developed with less focus on race. Also the crowd pleasing  fan aspects have been trimmed.

Sorting out the complex plot lines the musical develops three themes which do not mesh seamlessly: The Curse of the Bambino and the 86 year long drought between World Series wins with endemic hatred for the Yankees, a biracial love story, and the shameful legacy of racism by the Red Sox.

Of northern Amercian cities Boston fought most vigorously against school intergration and  forced bussing ordered by Judge Garrity. There was extreme resistance led by city councilor Louise Day Hicks of South Boston and community activist Pixie Palladino. In that 1970s climate the Sox player Reggie Smith asked to be traded. Later Tommy Harper was fired for comments then sued and won on charges of racial discrimination.

Hispanic and African American players were reluctant to join the Sox until a change of leadership and a policy shift following the death of Mrs. Yawkey.

During the high energy of the first act the excitement is palpable. It is fascinating to see the rookie, Johnny, from a minor league team in Worcester, make it to the show on the basis of a wickedly accurate fast ball. His former manager sends the orphaned phenom to the bigs with the sound advice to live clean, staying away from booze and dames.

When the kid shows his stuff he is taken under the wing of the Babe. The legendary Ruth was as well known for his off the field hard living lifestyle as for knocking them over the Green Monster. After the game, still in uniforms, they head to a North End speakeasy and brothel. Sorry guys, a fact check here. South End is more likely particularly as the nightclub appears to be run by African Americans. Then and now the North End is Italian American. Before that the North End had been Jewish and originally Yankee/ Colonial. The South End, shading into Roxbury, is where jazz clubs, speak easies and after hours joints were located.

The Babe (Tom McGowan) is played with suitable girth, swagger and arrogance. When Johnny, a straight kid raised by nuns, refuses to drink, the Babe is furious. During a confrontation they bond while discovering that they were both orphans. That launches into the show stopping song, the boisterous, outrageous “Brotherhood of Bastards.”

Enter Daisy a show girl abandoned on the road and seeking shelter from an uncle who owns the brothel/ bar. He offers a job and a warm bed with Mr. Ruth who has taken a shine to her.

In a huff she takes off with Johnny fast on her heels. He asks her to join him at his rooming house. She will have none of it until a thunderstom is  unleashed. With trepidation she accepts the offer with conditions. She gets the bed and he will sleep on the floor.

The ensuing love scene is sweet, innocent and tender. But also too drawn out taking the energy level down so low that the musical struggles back to its feet.

Well, as a colleague pointed out, that depends. Guys want more baseball but women in general buy the seats. Hence the importance of romance to sustain a show. That, apparently, was the problem at ART.

When Johnny succeeds on the mound management expresses concerns about his off the field activity. It just won’t do in racist Boston to have their emerging star be seen around town with a “Colored” woman on his arm. They offer a deal to get her a job on Broadway with one of Mr. Frazee’s shows. With Daisy in New York and Johnny in Boston they will rendezvous in New Haven and spend the off season together.

As a rookie, without the benefit of a personal manager which is the case today, he plays along with the demands of the front office. It seems like a plan which, while drunk from an after game party, he reveals to her.

Daisy will have none of it proclaiming that she will become a greater star than he.

While Aziza is a lovely and charming singer we drift too far from the ball field. The audience found her stunning in “Mr. Moon.” She evolves as an ersatz Josephine Baker in Paris. By the second act she is seen as a mature, worldly, successful artiste who speaks fluent French and divides time between New York and Paris.

The odds on that actually happening were like, well, the Red Sox winning the World Series.

Without Daisy as his woman/ muse Johnny loses the velocity and location of his fast ball. Hitting the bottle, following three years during WWII trying to get killed, we find him in the second act as a washed up drunk.

Then it's back to the fans for another burst of by now desperately needed energy. Fan #2 (Brooks Ashmanskas in one of a number of characters) is engaged in a debate with a middle aged African American (Roger Robinson) who reveals that it is not “The Curse of the Bambino” but really about another curse uttered by the Daisy's son Tim Wyatt (Derrick Baskin).

Now 28, having lost three years to the war, Tim is tearing up the Negro League as a pitcher with a natural born arm. By now Johnny has cleaned up his act as a minor league manager. Tim, with a note from Daisy, is sent to Johnny.

Against all odds he gives him a spot on the team. Of course he thrives and merits a tryout with the Sox. For which Tim says “Thanks Dad.” The cat is out of the bag.

Tim gets to try out with another “negro” a fielder. Both shine. They are talented enough to have an instant impact and would have assured the Sox of a shot at the World Series. The other guy proved to be Willie Mays (Alan H.Green) who was in the Sox farm system but never had a tryout at Fenway. The Sox also had a chance for Jackie Robinson who integrated Baseball by going to the Brooklyn Dodgers on his way to the Hall of Fame.

It was a full dozen years after Robinson that the Sox were the last major league team to sign a Negro, Pumpsie Green, a backup infielder (1959-1962).

Here the creators do a withering number on the revered former owner Tom Yawkey (Ashmanskas). The street next to Fenway Park is  Yawkey Way. He is presented as a vile racist during the infuriating song  “Mr Yawkey Has a Vision.” Although the kid has a stunning audition he is deemed “not ready” for the Sox. This tryout is beautifully accompanied by the duet between Johnny and Tim “Circle in the Diamond.”

There is a hint of the future in the rousing duet between Willie Mays and Tim in “See You in the Big Leagues.” It richly deserved one of the loudest ovations in an evening that included several.

The evening ended on a high note with the Sox finally winning in 2004. All of the characters formed a line to sing the finale “The Game of Baseball” followed by a standing O from the audience.

While a hit in Williamstown, mid way between fanatical Sox and Yankees fans, it’s a tough call to say what comes next. For a transfer to New York it doesn’t feel strong enough for Broadway. With such a large cast of equity players (thirteen speaking roles) it’s an expensive Off Broadway show even with just two pianists.

For me it could use more Bambino which is when the fun happens. But the love story is poignant and compelling. That appeals to women in the audience, who, well, buy the tickets.