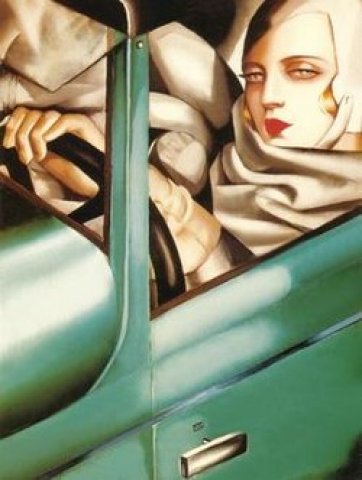 “Self-portrait; Tamara in a Green Bugatti” 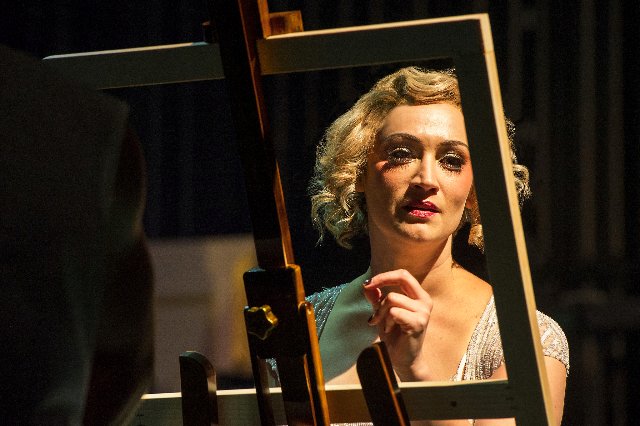 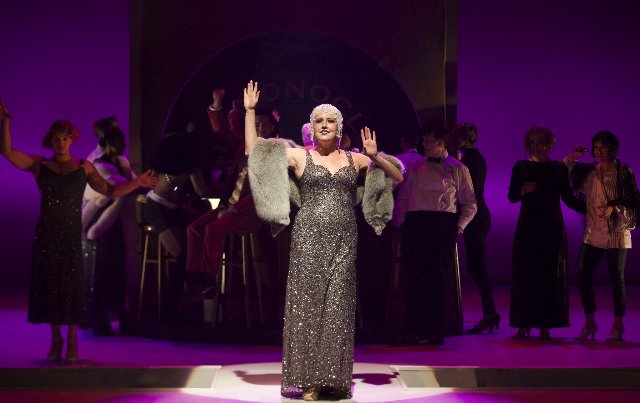 Parisian nightlife in a lesbian bar. Photo by Carlyn Brown. 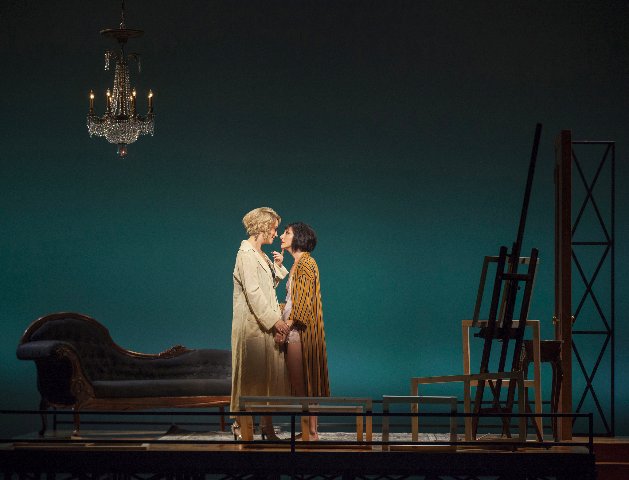 The mural scaled blowup of a cropped painting “Self-portrait; Tamara in a Green Bugatti” confronting us was painted as a cover for a 1929 issue of the German magazine Die Dame.

She is the subject of a sprawling, two act, two hour and forty minute musical Lempicka. The  book and lyrics  are by Carson Kreitzer with music by Matt Gould. It opened last night in a world premiere at Williamstown Theatre Festival and runs through August 1.

As a Polish expatriate, mother and bisexual, she lived well but with social aspirations well beyond her status and means. While depicting herself as a go-go girl with leather helmet in a racy, high end sports car, in reality, she drove a small, yellow Renault. That car was stolen during a bohemian walk on the wild side in Montparnasse.

The deception of the magazine illustration is a signifier of the manner in which the ambitious musical takes on the task of covering a broad swath of history. It plays loosey goosey with biographical details. Along the way we get art history 101 detours into the School of Paris of the 1920s. The romantic focus is a lesbian affair with a prostitute/ model. The tough, street wise tart, Rafaela (Carmen Cusack), is a fictionalized creation based on several obsessive paintings.

The lesbian affair, allegedly Lampicka's first, is closeted. Viewers speculate about the identity of models. The rule is that those who pose for nude paintings do not show up at openings. Rafaela is not unique in stating  that the artist has stolen her identity. She wants respect and recognition. Many male artists had sex with their models. Parisians were amused to spot Manet's Olympia at cafes. It is said that the artist gave Victorine Meurant a cut of sales.

There is embarrasment when Rafaela shows up at the opening and demands to be introduced. With a droll comment the patron says that he recognizes her from a painting he owns. There is a confrontation where Lempicka accuses her lover of ruining her reputation. Nobody will commission paintings from a known lesbian. Really folks, that's a laugh. This is the city of Gertrude Stein and Alice B. Toklas. Consider The Secret Paris in the photographs of Brassai.

The artist was having numerous affairs with the social elite who were clients of her flattering portraits. Lempika was an equal opportunity sensualist. That eroticism informed her slick and popular paintings.

She was born in Warsaw Maria Górska.  Her father was Boris Gurwik-Górski, a Russian Jewish attorney for a French trading company. Her mother was Malwina Decler, a Polish Catholic socialite who had lived most of her life abroad. She met her husband at a European spa. Her parents divorced so childhood was spent at boarding schools and with a rich aunt.

Living briefly in St. Petersburg, in 1915, she married a prominent Polish lawyer, Tadeusz Lempicki (1888–1951). Her family offered him a large dowry. As refugees in Paris as an artist she adopted the name of Lempicka.

The raison d'être for this lavish musical is to celebrate one of the foremost exponents of the uniquely 1920s international style of Art Deco. Between the wars it was an elegant expression of exuberance and decadence. In America there was the Jazz Age. Like F. Scott Fitzgerald, author of The Great Gatsby, when the champagne was flat, first with The Great Depression then WWII, their careers went bust.

A stash of her paintings was discovered in Paris and yet again her work is sought after by the rich and chic. Madonna is her best known collector. Other collectors include Jack Nickolson and Barbra Streisand.

A puzzle of this production, is that other than the curtain and several reproductions hovering over the finale, her work is alluded to but invisible. There are scenes of the artist working in the studio and the ensemble parading about with canvases. The “images” are  bare stretchers. A male and female in flesh colored underwear pose as “Adam and Eve” evoking one of her best know works. Images of males, other than in portraits, are rare in her oeuvre.

So this is a musical about the personal life rather than the work of the artist. Successful artists spend most of their time  in the studio. It’s not very interesting to depict that. In Lempicka, other than lurid gossip and the sweep of historical events, we gain little insight or appreciation of the oeuvre. The short hand critical assessment is that she was a major minor artist.

Based on Ingres, and her teachers Maurice Denis and André Lhote, there was nothing cutting edge about the work. At best she was a successful illustrator and society artist. It is revealing that, then and now, she is collected by the glitterati.

If her life and work represents a candle in the dark, the production at WTF directed with excess by Rachel Chavkin, has been fueled into a conflagration.

There is swing for the fences overreach in the vocals of Eden Espinosa (Tamara de Lempicka), Andrew Samonska (Tadeusz Lempicki), and Carmen Cusack (Rafaela). So many songs top off that they equate to a sameness. There isn’t a lot of shifting of gears or subtle nuances. Where, for example, is a mid range, heart wrenching ballad? Every number, even by secondary characters, is staged as a flatout show stopper.

At the outset we were geared for something big. The stage of WTF has rarely looked so bare or deceptively immense. The scenic design of Riccardo Hernandez and lighting of Bradley King stage the musical in broad strokes. There is a constant play of soft colored light as a backdrop. Occasionally, we get newsreel clips of historical events. The ensemble manipulates large spotlights on mobile metal stands. This has an initial impact that wears thin with repetition.

Instead of a fixed set, elements roll in and out. Metal bars signify a prison. A platform supports a small apartment/ studio. Literally, there are a couple of pop up bars. One for Apaches in the Latin Quarter and another represents an elegant lesbian bar. The ensemble is on the move pushing things about.

The ensemble gracefully folds the train of a wedding dress that sweeps the length of the stage. It is an accessory to costumes designed by Montana Levi Blanco.  They often seem more matronly than chic as worn by Espinosa. She has more success dressing the spectacularly Deco Cusack who with slim figure, and a helmet of short black hair, seems to have stepped out of a Lempicka painting.

Through this saga of historical events it is challenging to get an emotional fix on Lempicka. Character development is conveyed more through design than performance.

The most credible scene occurs early on. Shortly after the Bolshevik takeover Tadeusz is arrested as a former agent of the Czar. Seeking out where he is being held she uses jewelry to bribe officials. The scornful response is that these treasures were stolen from the people. Having handed over her wedding ring there is nothing left to give. The final negotiation is for her body.

Once free and bound by night train to Paris with their infant he presses “what did you give.” How’s that for gratitude? Relentlessly, he wants to know what became of the ruby a gift from the Czar.

Using the last of the family jewelry to rent a cold water flat she asks when he will find a job? Instead he is intent on raising an army to take back Russia from the peasants. I have heard both sides but it is hard to empathaize with the White Russians. Aristocrats became waiters and cab drivers. In a scene he is the humiliated teller in a Polish bank.

The arrogant, spoiled and autocratic Tadeusz becomes ever more off putting as events unfold. When she becomes a successful artist he resents having to attend openings and soirees which are essential for her career. They both take lovers and eventually he asks for a divorce.

The profile of her evolution as an artist is disjunctive. It is unclear whether she is a gifted autodidact or formally trained. There is a scene of her working with other young artists.

It is here that she is spotted by Baron Raoul Kuffner (Nathaniel Stampley) a collector and patron. That he discovered her is literary license.  There are references to his Jewish family. When his wife died he married Tamara.

She convinced him to sell his property in Poland and transfer the assets to Switzerland. At her insistence they emigrated to America in 1939 living in California and later on Fifth Avenue in New York. From then on she was known as the Baroness with a Brush. Her exhibitions in America were less than successful although she was rediscovered in the 1960s. In later years she updated or painted over many canvases.

Given the current running time there are scenes and characters which are superfluous.

Evoking the eclectic globalism of The School of Paris there is a gathering of emerging artists in a café. They defer to the better known futurist, Steve Rattazi as Marineti. Extracted from the Futurist Manifesto, he wants to lead a group of artists on a mission to burn down the Louvre. Later he morphs into a Mussolini Fascist. Cut.

In most scenes Rachel Tucker has tagged along as the Baroness. Her husband has been philandering with dancers, floozies and hatcheck girls as well as Lempicka. Tucker, who has a wonderful voice, delivers a poignant death bed scene with Lempicka staged awkwardly as a  witness. Other than delivering a plot point it seems gratuitous.

Given the resources than went into this production, when Lempicka leaves Williamstown, a long and winding road looms ahead.