The Children By Lucy Kirkwood 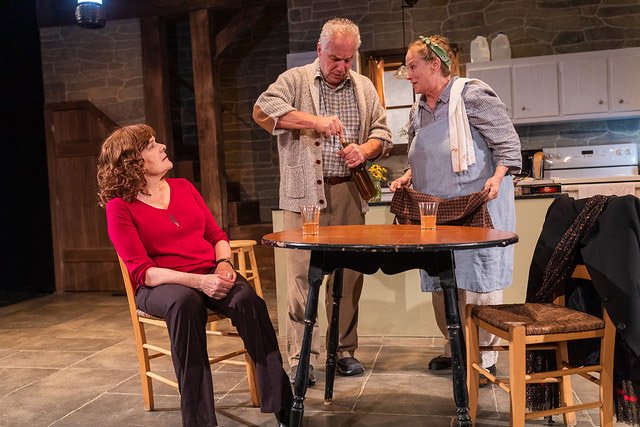 Wine to celebrate a reunion. Photos by Nile Scott. 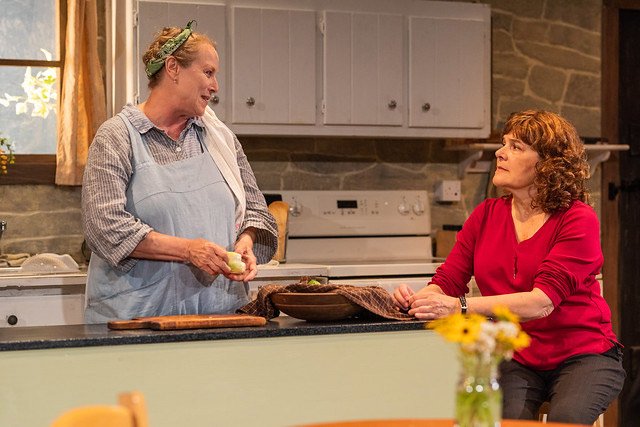 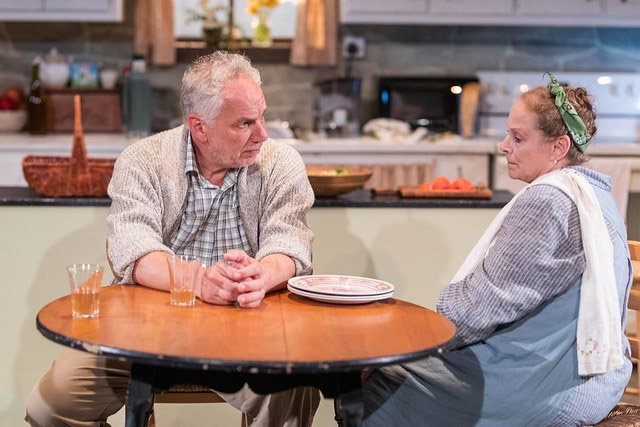 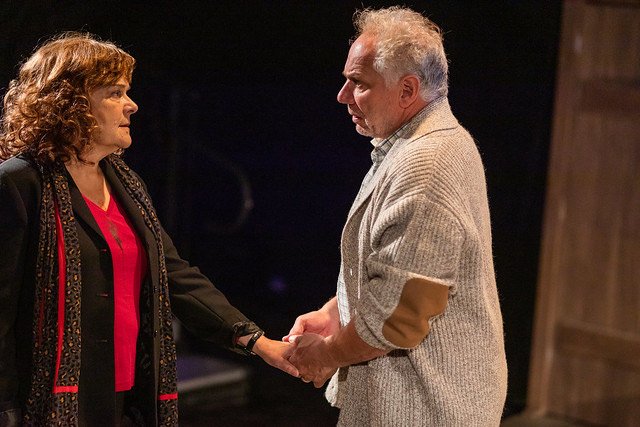 Lovers together after all those years.

There has been an accident at a British nuclear power plant. The home of former scientists/ engineers Jonathan Epstein (Robin), Diana Prusha (Hazel) has been trashed and condemned. That has entailed moving to a cottage (designed by Patrick Brennan) at a safe distance. Still he returns daily to tend to cattle.

Against all advice they have named them like pets. He continues to feed and milk them but discarding it.

When, after many years, Ariel Bock (Rose), comes to visit he is away doing chores on the now contaminated and abandoned “organic” farm. As nuclear physicists and engineers they had been a part of the team that built the power plant. Robin and Hazel stayed on. It is partly through their design flaw that the disaster has occurred.

There is a lot of catching up which consumes the first act. From Hazel there is a sense of domesticity, and forced hospitality. That equates to mostly inane chatter and rituals about making tea. Hazel, as played by Prusha, is ditzy and annoying which is consistent with her character. Bouncing about in an apron and keeping a tidy cottage it is difficult to imagine her as a nuclear physicist.

Not so with the reserved, calculated, less overt Rose. While maintaining very British decorum and generic hospitality the strain and estrangement is palpable but we don’t know why.

The small talk and overt politesse is beyond excruciating. After way too much of this there is palpable relief when Robin arrives. The energy level rises like the clicks of the bonkers Geiger counter. As usual his performance is as radioactive as the nuked power plant.

In addition to pursuing science Robin has avidly chased skirts. Initially he was shagging both women. To secure hold on him, as Rose later states, Hazel  got “knocked up.” Given her obsessive/ compulsive behavior it is unlikely that she would forget to take a pill.

That first child, a daughter, grew up angry. They avoid taking her constant calls. The couple has four children. Ah, there’s that titular word. The theme evolves of nurturing and what is owed to the next generations.

Rose never married and has no children. Not natural or birth children but how they are comprised in another sense is the case in point.

Even now retired Robin it appears is as randy as ever. When his wife is upstairs taking a call he makes moves on Rose more out of habit than romance. For that he needs a blue pill and a half hour to activate it. She fends off when he grabs her breasts. It seems that she had a double mastectomy. Her cancer is in remission.

It seems he makes his own wine. Hazel warns to watch out if he offers the turnip wine. By the second bottle there are revelations. It seems that Hazel has known all along about his cheating including with Rose. With good measure Hazel adds that she never liked Rose.

By now I was enervated by the folderol of this menopausal love triangle. It’s a bloody mess before Rose exits with the crucial announcement that she has returned to work at the plant.

In essence it’s a suicide mission. If not immediately (as with Robin’s cows as it turns out) then cancer over as long a span as decades. The ‘children’ of Rose are the young staff with families. Rose is recruiting senior scientists and engineers to release and save the lives of junior staff. Of course she wants Robin and Hazel to join her team.

The approach of the Lucy Kirkwood play is conceptual. It’s rather like a BBC detective series where there is investigation of a murder that we don’t witness. There is crime but the audience is spared the horrific details.

The sacrifice and subsequent complications of 9/11 first responders evokes moral outrage over their neglect by insurers and the Federal government. That October a friend and I took several hours to circumnavigate still smoldering Ground Zero.

Recently we watched Chernobyl the remarkable HBO mini series. We were spared no details of human sacrifices. There were graphic depictions of the results of radiation sickness. The suffering was beyond calculation. With full scientific risk assessment miners and youth were sent into the reactor on missions resulting in certain death. For this there were given a reward of some 400 rubles.

The crew chief of the miners who tunneled into the reactor asked the scientist if they and their families would be taken care of.  There was no reassurance. They went anyway knowing that their call to duty would save million of lives. The party line of Gorbachev and the Politburo was denial of crisis and later that it had been contained.

Having seen that series in gruesome detail helped to comprehend just what Rose was asking of Hazel and Robin. When arrangements are made for a cab to the plant there are telling negotiations. There is demand for a hundred quid in cash to drive to the edge of the restricted zone. It signified the risk involved and the token payment to Soviet miners and the hundred of thousands who labored to contain Chernobyl.

The radiation is surrounded by a concrete container. It is said to be designed for a hundred years. After that is anyone’s guess. There is still American government policy that nuclear power is safe and cheap energy. Many of our power plants are now decades old with outdated technology. There are accidcents, like Three Mile Island, waiting to happen.

In Chernobyl and The Children it was design flaw and human error that led to disaster. Taking the moral high ground in a play that demands our attention Rose will shorten her life to extend those of her children. That sobering message packs a wallop.