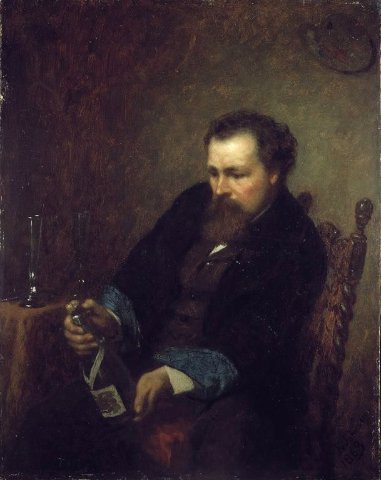 The National Academy of Design is pleased to announce the launch of the virtual Eastman Johnson Catalogue Raisonné on July 29, in recognition of the anniversary of the artist’s birthday. In this first phase, the catalogue raisonné is focused on American artist Eastman Johnson’s paintings. Subsequent phases will include the artist’s drawings and prints. Founded and directed by Dr. Patricia Hills, project managed by Abigael MacGibeny, and stewarded by the National Academy of Design, the Eastman Johnson Catalogue Raisonné (EJCR) is based on Dr. Hills’s decades-long research on Johnson’s artwork, which dates to the 1972 monographic exhibition of his work at the Whitney Museum of American Art.

Celebrating the artist’s substantial contributions to the development of American genre and portrait painting throughout the latter half of the nineteenth century, this catalogue raisonné is a vast and intricate online resource designed to be a living archive. The website address of the Eastman Johnson Catalogue Raisonné will be announced on July 29.

“The National Academy of Design is honored to serve as the steward of the Eastman Johnson Catalogue Raisonné. Elected as an Academician in 1860, Eastman Johnson was an active and engaged leader of the National Academy community over many decades—serving as a board member, officer, and instructor—so it is especially meaningful that the Academy is now able to help preserve and amplify his work and legacy for future generations. As an online resource that will be linked to essays and other critical work by contemporary scholars and historians, the EJCR will set a new benchmark for what a catalogue raisonné can be, and we are deeply appreciative of Dr. Patricia Hills for her extraordinary work in bringing this to fruition," states Gregory Wessner, Executive Director of the National Academy of Design.

Similar to a printed catalogue raisonné, the EJCR website provides primary information on paintings by Eastman Johnson, and subsequently will incorporate his drawings and prints. According to Dr. Hills, "This information will not only aid in the connoisseurship of Johnson's art, but will provide a multifaceted lens for examining the history of American art." More than 900 of Johnson’s paintings are organized thematically and catalogued with their titles, dates, media, dimensions, inscriptions, current owners, provenance, exhibition history, and bibliography. Many of the entries also feature quotes from historical sources, remarks by Dr. Hills and MacGibeny that provide insight into the works, and Dr. Hills’s examination notes and opinion letters. Works are related to each other to create meaningful connections that illuminate Johnson’s interests and practices.

Johnson’s thematic areas of focus include early representations of the Ojibwe Nation in Minnesota Territory; the visual culture of the Civil War; images of Black and white people which avoided stereotypes of the time; mid-century artisans; the celebration of farmers and the agrarian communal ideal; images of the interiority of women; summertime living at the seashore; and the shift in style and content from an earlier moralizing genre painting to subject pictures with an emphasis on the spontaneous brushstroke. His portraits document networks of literary and historical figures including Henry Wadsworth Longfellow and his circle, as well as politicians, businessmen, and patrons who were prominent in their time including Jay Gould, John D. Rockefeller, Cornelius Vanderbilt, and William Vanderbilt. Other portraits include those of three U.S. Presidents painted from life—Chester Arthur, Grover Cleveland, and Benjamin Harrison—and many other members of Gilded Age society and their families.

Eastman Johnson’s ties to the National Academy of Design are longstanding. He became an Academician in 1860 and participated actively in the Academy’s Annual Exhibitions throughout the second half of the nineteenth century. He also served on the Academy’s governing body, the Council, from 1866 to 1870, as Vice-President from 1874 to 1876, and again on the Council for a three-year term beginning in 1890. Johnson taught at the Academy’s school for the academic years of 1867 and 1868. The Academy is proud to become the long-term steward of the EJCR, managing future updates and keeping it available to the public in perpetuity.

The Eastman Johnson Catalogue Raisonné has been made possible with support from Boston University, the Wyeth Foundation for American Art, the Fenimore Art Museum in Cooperstown, the National Academy of Design, and the Mr. and Mrs. Raymond J. Horowitz Foundation for the Arts.  Private collectors also have been generous contributors to the Eastman Johnson Catalogue Raisonné Endowment Fund. The EJCR website was developed by panOpticon, whose specialized catalogue raisonné platform enables the digital collection and presentation of this rich content.

Eastman Johnson (1824–1906) was a leading genre and portrait painter of the middle-to-late nineteenth century. Born in Maine, he began his career as a portrait draughtsman, working in Maine, Washington DC, and Boston. In 1849, he went to Europe to learn to paint and study the Old Masters. He stayed two years in Düsseldorf, studying with Emanuel Leutze, then moved to The Hague where he established himself as a portrait painter. In 1855 he relocated to Paris to study with Thomas Couture, who worked in a modern style for those times. His stay was cut short when he received news his mother had died. He thus returned to the U.S. in late 1855, living first in Washington, where his family resided, then moving to New York City to advance his art career. He became known as a genre painter of American scenes, and his paintings of African Americans were highly praised. He was one of the first of his generation to draw and paint the Ojibwe in the Lake Superior area. He became an Associate of the National Academy of Design in 1859 and the following year he was elected a full Academician. During the war, he followed the Union troops and painted scenes he had witnessed. He also took time off to paint the maple sugar spring harvest in Maine in the early 1860s. After 1871 he spent summers in Nantucket, where he painted his series of the cranberry fall harvest. The last twenty years of his life he spent primarily as a portraitist. He was active in New York art organizations, belonged to the Century Association and The Union League Club, and was a founding trustee of the Metropolitan Museum of Art.

Today, Johnson is recognized as a painter who brought more sophisticated painting techniques to America, and extended the range of “American” subjects, often transforming traditional European themes, bringing a more dignified and democratic content to genre painting. He spoke to and for his own generation and was a great influence on a number of genre painters such as Thomas Waterman Wood, J. G. Brown, Thomas Hovenden, George C. Lambdin, and Winslow Homer.

History of the Eastman Johnson Catalogue Raisonné: Art historian Patricia Hills, Professor Emerita at Boston University where she taught for 36 years, began the project in 1971 with her research on Eastman Johnson for her doctoral dissertation (PhD, Institute of Fine Arts, NYU). She organized the exhibition Eastman Johnson for the Whitney Museum of American Art in March 1972, which was later presented by the Detroit Institute of Arts, the Cincinnati Art Museum, and the Milwaukee Art Center. In 1999 she was invited to co-curate the exhibition Eastman Johnson: Painting America, which opened at The Brooklyn Museum and traveled to the San Diego Museum of Art and the Seattle Art Museum. Over the years she has added to her Johnson files and has consulted with museums, galleries, auction houses, and private collectors on works by Johnson. Abigael MacGibeny (MA, Boston University) joined the project in 2012. Since that time, she has conducted additional research into all of Johnson’s works to supplement Dr. Hills’s files and expand the catalogue raisonné and served as project manager for its completion and publication.

About the National Academy of Design

Founded in 1825, the National Academy of Design promotes art and architecture in America through exhibition, education, and research. We advocate for the arts as a tool for education, celebrate the role of artists and architects in public life, and serve as a catalyst for cultural conversations that propel society forward. At the core of our mission are the National Academicians, a vibrant community of 450 artists and architects in the United States. Representing a wide cross section of practice, the Academicians embody our shared belief in the power of art and architecture to change society and enrich lives. Through their individual work and collective initiatives, the Academicians support their communities, peers, and the next generation of creative thinkers.