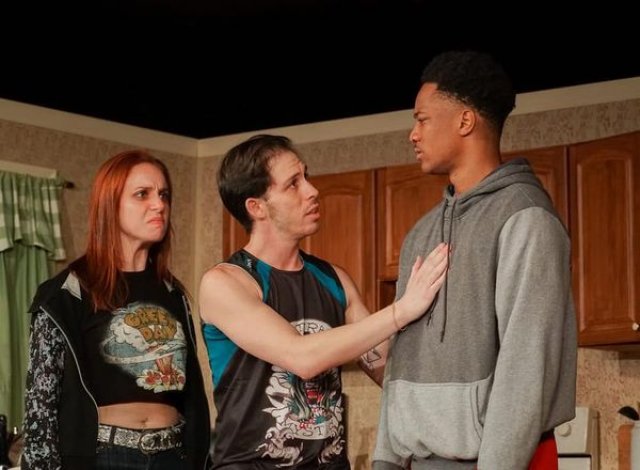 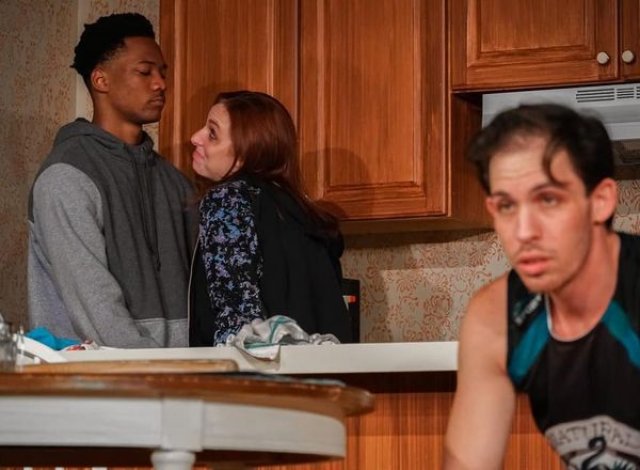 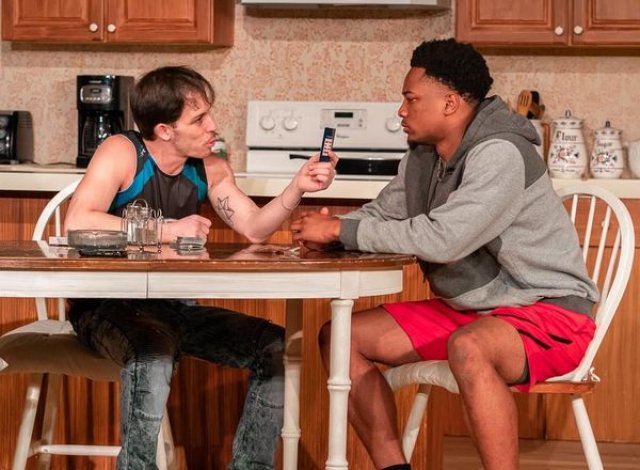 Wolf and Badger, a taut, intense drama receiving a mostly strong world premiere production at the professional Main Street Players in Miami Lakes, presents a sobering reminder of the potentially grave consequences of drug use. The riveting, realistic production runs through Aug. 29 in Main Street Players’ intimate playing space. Folks also have the option of watching the production virtually on demand.

Michael John McGoldrick’s 90-minute play is not particularly original or groundbreaking. However, the piece paints a painfully realistic portrait of what can happen when drug use becomes habitual. The play, without preaching or vilifying its characters, stares the issue’s ugliness in the face without offering answers. Indeed, if you’re looking for a neat, tidy, or happy ending, you won’t find one here. Actually, the play’s ending is curious; after someone beats another person repeatedly with a baseball bat, the victim would probably be out cold and not engaging coherently in dialogue.

We can identify with the play’s three characters not because they are nice and upstanding. Rather, many of us, at some point, get stuck in a spiral of undesirable behavior. So, while we might not use or sell drugs, Wolf and Badger compels us to look inward at how we are often prisoner to our own recurring problems and behaviors.

Meanwhile, McGoldrick’s play is timely because legal drug abuse and illegal substance use are issues that aren’t going away. In fact, the pandemic and the problems it has presented have resulted in an increase in drug use, according to news reports.

The play takes place in 2006, at the height of the nation’s opioid epidemic. The setting is a working-class neighborhood in Syracuse, N.Y. More specifically, the playwright draws us into the living area of half brothers, Landon and Maddox’s home.

Maddox, 19, is a former drug user who is trying hard to stay away from the stuff. He wants to enter the Army, apparently to better himself and escape the home’s toxic environment. Inside the residence, Maddox and Landon’s mother, an offstage character, is gravely ill, on dialysis. Speaking of 26-year-old Landon, he is a former plumber and current drug user. His boss fired him because the young man mouthed off at his superior. The uncouth, volatile Landon spends his time caring for his family and trying to toughen his sensitive, easily-overwhelmed younger half-brother. Neither of the young men’s fathers are in their lives.

When Maddox’s impulsive, crafty ex-girlfriend, 19-year-old Ainsley, enters the scene, the situation becomes more urgent. Specifically, Maddox will need to leave the home for good, sooner rather than later.

The play’s title comes from a drawing Maddox made of himself and his half-sibling when they were children. Maddox drew himself as a badger and Landon as a wolf. If you think about it, a wolf fits Landon’s aggressive personality while a badger, which is less dangerous and aggressive, suits Maddox.

McGoldrick has crafted snappy, sometimes coarse dialogue that we might hear on an inner-city street. Oftentimes, in a style similar to playwright David Mamet, the characters cut each other off mid-sentence. All of this reinforces the urgency in the play. Each of the three characters strongly desires something. Maddox wants a better life, Landon needs his drugs, and Ainsley is desperate for money to free her current boyfriend from jail. The characters face obstacles to their desires, resulting in intense drama.

In fact, Wolf and Badger is about as intense as other plays focusing on volatile relationships between brothers. Specifically, McGoldrick’s piece brings to mind Lyle Kessler’s Orphans and Sam Shepherd’s True West.

One humorous, telling exchange neatly communicates the complexity of Maddox and Landon’s relationship.

Maddox: What Ainsley said. Was that true?

Landon: Because I hate you.

Maddox: Then why stop me?

Landon: Because I love you.

Landon: That makes us brothers.

Director Danny Nieves creates palpable tension throughout. Many times, characters stand within inches of each other’s noses. And during scenes that require the characters to become physical with each other, the actors believably look as though they’re hurting each other. Nieves also punctuates explosive scenes by having the performers bang their hands on surfaces. In addition, the director uses periods of silence to heighten the already thick tension in the air. Further, Nieves paces the production at a speed that heightens the drama, but not so quickly that we lose track of what’s happening. A consistent use of foreboding sound effects, such as music, would have further added to the tension.

Acting wise, Joshua Lyons, as Maddox, conveys a believably sensitive, brittle, nervous young man. He rapidly bounces his leg up and down as a sign of nerves. Also, at times, he shuts his eyes tightly, covers his face, and–audibly breathing with his hands clasped–looks as though he’s about to cry. To his credit, Lyons makes each gesture and expression seem natural, whether Maddox is nervous, or weary and exasperated.

Meanwhile, Brandon Hoffman imbues Landon with a commanding aura, while acting naturally gruff and speaking in a sharp, forceful, at times menacing voice (think a young Stanley Kowalski from A Streetcar Named Desire).

In McGoldrick’s script, the playwright notes that Landon’s toughness, which Hoffman nails, “masks a vulnerable core.” While Hoffman never quite conveys that vulnerability, he does, at appropriate times, credibly act fond of his half-brother.

As Ainsley, Melissa Bibliowicz sometimes overacts. But generally, she lends the character a convincingly impulsive, desperate air. At times, her face betrays a sly expression that helps communicate the character’s craftiness. During other moments, her expression suggests an aimless, careless, lost soul. To her credit, when necessary, Bibliowicz finds a softer, more caring side to her character.

Also, Sparhawk has created a spacious, orderly, and clean set to represent the half-siblings’ home. However, the set hardly looks “old and worn” as McGoldrick specifies in the script.

While Wolf and Badger isn’t a great play, it shines a light on the need to fix our nation’s drug problem. In fact, doing so might improve, if not fix, many of society’s other ills.

Wolf and Badger runs through Aug. 29 at Main Street Players, 6766 Main St. in Miami Lakes. Performances start at 8 p.m. Friday and Saturday, as well as 2 p.m. on Sunday.  For in-person tickets, go to https://www.onthestage.tickets/show/main-street-players2/wolf-and-badger-14599/tickets.  For video on demand tickets, go to https://www.onthestage.tickets/show/main-street-players2/wolf-and-badger-1269/tickets/60f9b16b24b83100030512e1.