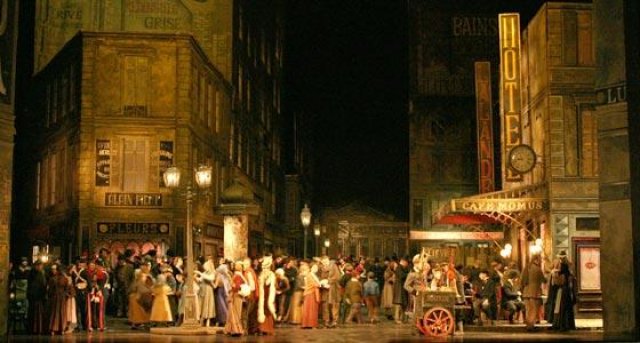 Puccini’s music is beautiful and his notes sit particularly well in the human voice. Music written for the voice, as Puccini did, attracts audiences, especially when it is delivered by a stellar cast. Along with a rich musical mix, deep characterization draws us in.  In the current revival of Otto Schenk production at the Munich State Opera, character is on full display amidst bantering bohemians and the flirtatious Musetta.

This Boheme richly portrays Puccini’s characters in all their complex humanity. Jostling and horseplay turn to tenderness and heartbreak as we fall in love with characters again.

Charles Castronovo as Rodolfo is both jealous and tender towards Mimì. Mattia Oliveri is a hot-headed Marcello with a heart of gold. Tartar soprano Aida Garifullina as Musetta may be a manipulative grifter yet she sells her earrings to buy the medicine Mimi needs. She glides along her waltz in the second act.

Garifullina can apparently switch characters on a dime.  Later this year she will sing Mimi in Berlin. The talented young singers in this production will soon be heard all over the world.

Mimi famously introduces herself offstage, directing our attention to the place she’ll enter and rousing our curiosity about the person whose voice is launched. Ailyn Perez’s Mimi is complex. She is fragile, yet present. Her introductory ‘Si, mi chiamano Mimì’ is ravishing. She is very much in control, yet we succumb to Puccini’s long phrases while clearly hearing her words. Her voice soars with the excitement as she parades the Paris streets on Christmas Eve. Her anguish is delicate but palpable in the final act.

Charles Castronovo, who performs in all the festival Boheme productions, is Rudolfo. His voice is beautiful and blazing. Yet it is masculine. No limped-writsted poet here. Technical polish does not diminish his gorgeous vocal colors on display in ‘Che gelida manina.’  His final cries of ‘Mimì, Mimì’are full of heartbreak.

Mattia Olivieri is very young and being cast in all the great baritone roles, Escamillo, Don Giovanni, Figaro and so on. He came to the attention of Munich audiences when as Sansculotte, he skillfully bawls and slurs the Marseillaise, virtually summoning the evil spirits of the revolution in Andrea Chénier. He first performed Boheme in the role of Schaunard in Valencia, one of the most significant moments of his life. The lessons he learned there: attention to detail, loyalty to the score and presenting true character. Schaumard loves life and has very little experience of death. Tears flowed at Mimi’s death. Olivieri's do in Munich.

Francesco Lanzillotta helmed the Opera orchestra, providing brief, sharp quotation marks around long smooth sections of the score which unerscored the singers and never took them over. He composes for ballet, movies and theater.

Part of the opera’s attraction  is that it fans our desires.  While the four tableaux that make up the libretto are simplistic, the characters are not.  And the music is to die for.