Sweet Soubrette in Concert at Dream Away Lodge 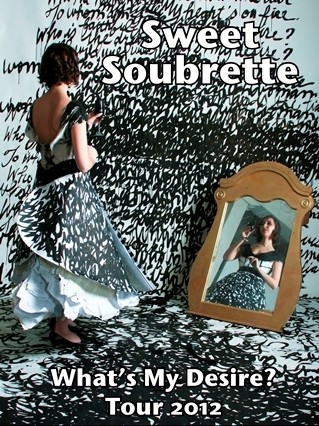 Sweet Soubrette will be touring the Northeast U.S. in support of their latest release, “What’s My Desire?” a 4-song EP that previews the third album now underway. The EP's dark and passionate title track was inspired by the book Henry and June by Anaïs Nin, a work based on Nin's diaries when she was becoming a serious writer and romantically involved with author Henry Miller. Love, art and ambition collide in this powerful song.

Sweet Soubrette features the songwriting, vocals, and ukulele of Ellia Bisker, whose dark, edgy love songs have been honored with three ASCAPlus awards. Sweet Soubrette has appeared in variety shows and cabarets, at rock clubs and on singer-songwriter stages, in cultural festivals and comedy shows, circus shows and art galleries, puppet shows and performance art installations, and has toured in Italy and France.