Moonwalking and Beyond to Gaga Techno Beat 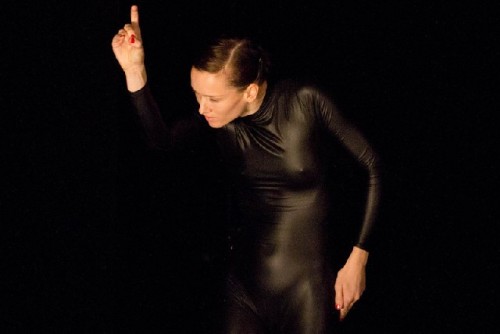 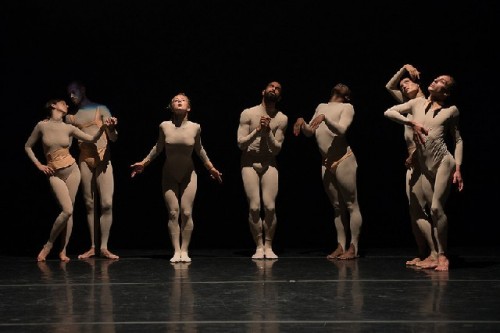 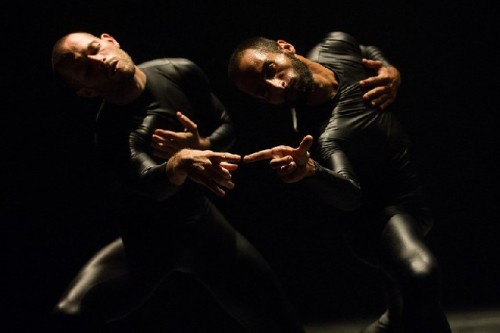 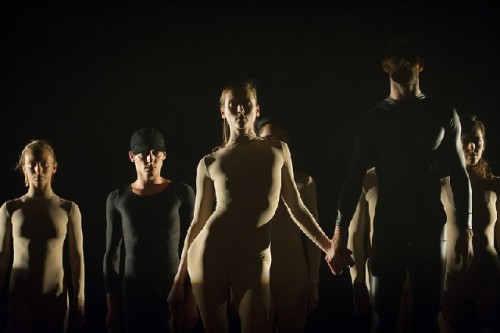 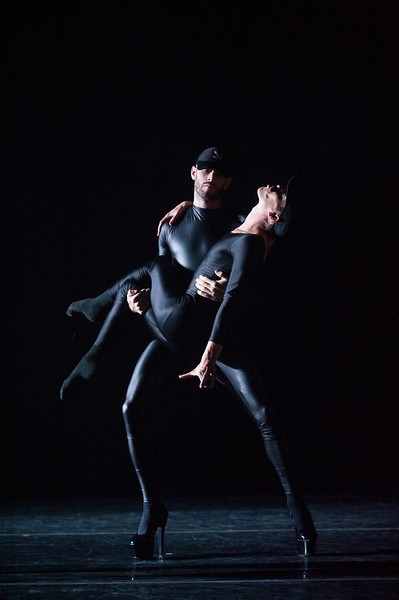 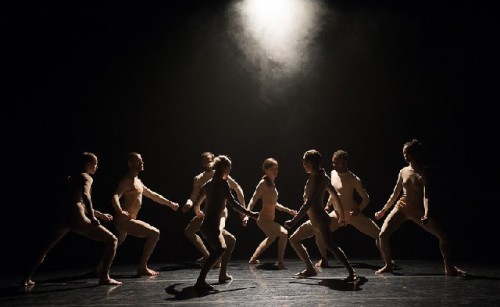 L-E-V, a relatively new Israeli dance company and collaboration between dancer Sharon Eyal and  multi media artist Gai Behar (they do not like the term chorographers) is making their American debut this weekend with a single, hour long work, House, at Jacob’s Pillow in Becket, Mass.

The lighting design by Avi Yona Bueno (Bambi) and the music which is refreshed for each performance live by Ori Lichtik are key interactive elements in dance that is inspired and improvisational. This is so consistent and ongoing that dances are only frozen because of the demands of deadlines for performances. We only saw one performance but were told that each is fresh and different depending on the mood and chemistry of the company on any given night.

To a pulsing techno beat, in a black, body revealing unitard designed by Ma’ayan Goldman the darkened stage, with a single dim spot, illuminates Sharon Eyal. She introduces us to the unique style developed from Gaga warm-ups that focus dancers on feeling their bodies and letting that dictate the wrenching torsion of body movements.

Slithering about in a more digital than human mode Eyal appears to ignore skeleton and muscles in creating astonishing configurations that defy any defining spine or center of gravity. Body elements seem to detach from the frame and set off on their own in lurching, jerking movements, or quick as a flash, spins and twirls.

We are disabused of the notion of watching a human as we reference a Ballet Mechanique with machine like movement inspired by sound and percussion rather than dance music in any traditional sense.

What a relief to experience contemporary dance not set to Baroque music. We will get our fill of that with the superannuated Mark Morris Company this week at Tanglewood.

Having set the mood and tempo with an astonishing solo the rest of the company appears in flesh toned, body revealing unitards with kinky plastic g-strings, panties and girdles. While generally disembodied and dehumanized there is a prevailing eroticism to the dance than ebbs and flows in sensual waves.

There are several segments or intervals to the non objective program of the dance that has no seeming narrative intent other than varied themes from techno to dicso. The audience, with an instinctive horror vacui, strives to read into the movement some meaning where there may be none other than the joy of invention and movement.

As the vulgarian patron behind me put it annonyingly “Another dance about nothing.” Seinfeld as choreographer? Excuse me. If you demand a narrative stay home and read a book.

The passages are defined by the return of Eyal in interludes to, as she put it during a well attended Q&A following the performance, “stitch together” the segments. She generally stays separate from the ensemble because of an inability “to count.” Eyal regards her solo work and that of the ensemble as inspiring each other.

The company is remarkably precise in their abilty to replicate her snake like contortions, impossibly disconfigured back bends and twists. There is definitely a look and feel to L-E-V that speaks to incredibly focused vision, invention and discipline.

It is interesting that they often moved slowly with no urge for spectacular leaps and lifts. Their feet rarely leave the ground as the dancers are often separate but in sync. When there is limited partnering it’s intended to make a point. The company is as interesting for minimalism in what it doesn’t do as for its unique vocabulary of movement. It feels entirely fresh and inventive.

During one segment Bambi sends a beam of light horizontally across the stage. Ever so slowly and deliberately a tall, nude dancer, on spike heels, inches forward with the company flanking and inspired by her. In an unhurried manner she is partnered by a male dancer evoking modern techno love. I wondered why there is this single nude woman while the others, in those clinging and revealing unitards, remained costumed.

In art, of course, there is no answer. It is what it is then it is up to the audience to respond to the challenge of the evocative and unfamiliar.

For the New York Times reviewer “It comes down, in the end, to how you feel about aliens and robots and zombies, who express only the extremes of human emotion. I’m not a fan.” Piss off dude. Get with the program.

It is essential, especially for critics, to remain open to change. In that sense L-E-V was riveting and galvanic. We hunger to see them again. They put us in another time and place and that is just fabulous.

During the talk back I wanted to know more about Gaga technique. I asked about the connection to Ballet Mechanique and then, out of left field, commented that the movement reminded me of Michael Jackson's moonwalking.

The response was astonishing. Eyal said that she loves ballet and loves Michael Jackson.

Pointing to me as “right on man” Gai Behar added that when they moved into a new apartment one of the challenges was finding a spot for their enormous photo of Michael Jackson.

That information allows for a way back into their practice. It is fascinating to observe how they capture an element of pop culture, Jackson’s inventive dance moves, and then develop and expanded that into an entirely new vocabulary of movement.

With a quick follow up I asked them to tell us more about Gaga. She explained that it is a means of warming up and being open for improvisation. It is about the dance coming from inside the body. Asked about the sexuality of the dance she said that it is all around us and for her as spontaneous as putting on a sweater.