Timon of Athens at Stratford Festival

Yet Another Superb Production 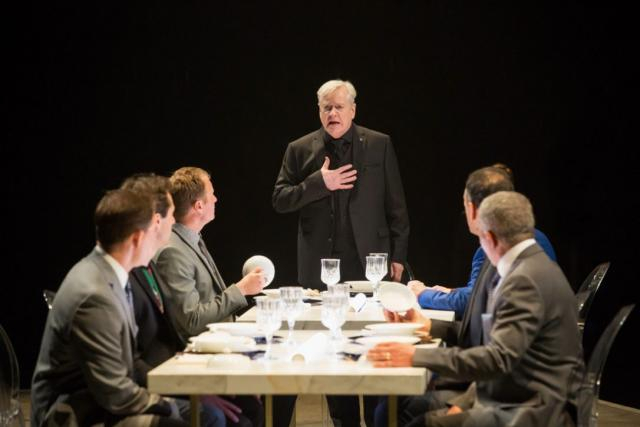 Timon of Athens has not been a popular Shakespeare classic: in fact, it has not been revived so often as most of his others. Its horrors are more melodramatic than tragic; and its comic elements are more bizarre satire than familiar foolishness. There’s a self-indulgent quality to Simon’s obvious pleasure in the abject worship he receives for his generosity when giving away his treasures to his grateful followers that undercuts our admiration. Then, as he loses his fortune and must ask for help from those he’d lavished gifts upon, we can smirk at their ingratitude and hypocrisy but are not filled with sympathy for the smug and vengeful Simon. Lord Bountiful becomes vengeful victim, and Shakespeare’s drama starts to resemble Moliere’s later The Misanthrope.

Timon’s revenge – a promised return to lavish treatment that turns out to be empty dishes, plain water, and physical punishment for his guests — is perhaps the high point of the play. But then, implausibly, Timon, becomes a self-punishing hermit, stumbles upon buried treasure, which he uses to bribe others to attack his native Athens, and ends as a bitter fanatic. At the end, Simon reminds me of the monomaniac recluse in Stratford’s production last year of Ibsen’s John Gabriel Borkman.

Stratford has a special history with this play, dating from Michael Langham’s extraordinary 1963 production with incidental music commissioned from Duke Ellington. Updating the setting, Langham offered an opulent melodrama with some textual additions, guest musicians and dancers. Its sense of a sociopolitical commentary was headed by an extraordinarily complex humane interpretation of the title role by Brian Bedford as a very empathetic Timon. I remember that the Duke was in residence, working with musicians and cast members, and that among the dancers was the great modern dance choreographer Garth Fagan who has created all the dance for worldwide productions of The Lion King.

Stephen Ouimette’s current production (he helmed one in 2004 at Stratford) is more modest than Langham’s but every bit as redolent of contemporary society. Veteran actor Joseph Ziegler creates a Timon who seems almost too full of himself in his rich-man start but also not only pathetically crushed by his false friends’ ingratitude but also so helplessly unprepared for their betrayal that we can understand his violent anger.

The viciously ranting misanthrope Apemantus, is played with such subtlety and believability by Ben Carlson that he seems a more potent antagonist for Timon than usual. Tim Campbell’s manly Alcibiades is an impressive ally.