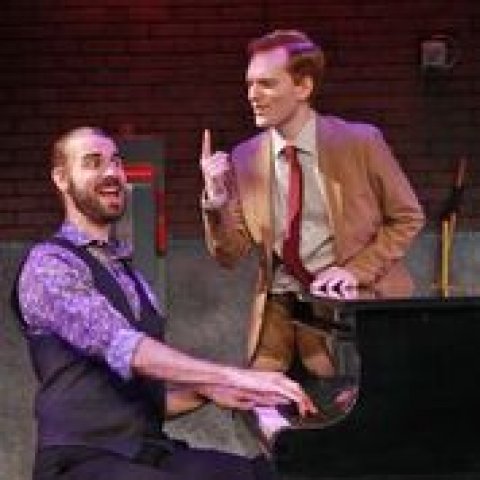 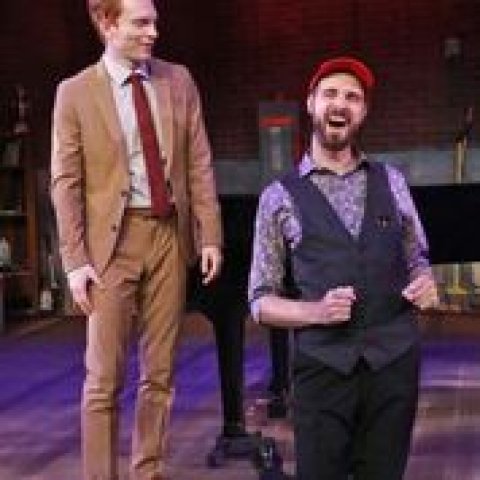 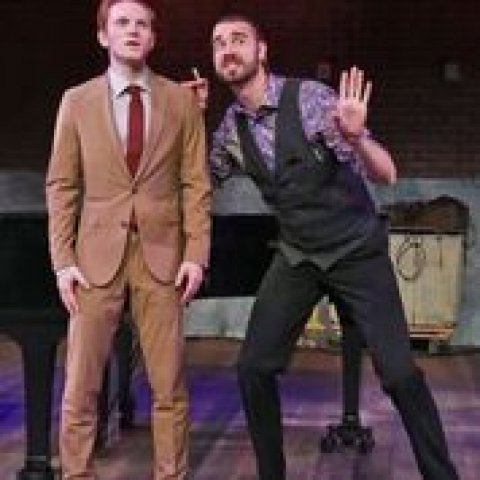 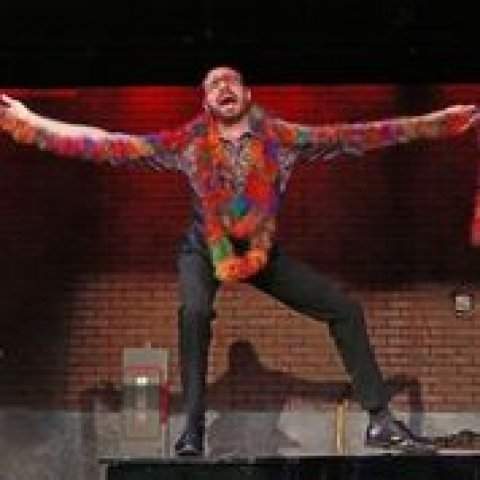 It’s hardly a mystery as to what has endeared the madcap musical comedy Murder for Two to many audiences during its (so far) relatively short lifetime in the theater.

No, it’s likely not the plot. Indeed, it isn’t exactly original or groundbreaking in the murder mystery genre. Nor is the music the primary factor. The songs are mostly forgettable and the lyrics are, at best, serviceable.

But, when you have the ability to witness one highly-skilled comic actor slip seamlessly into and out of a dozen parts – and hear both cast members play the piano like virtuosos – a ticket becomes hard to resist.

Fortunately, Actors’ Playhouse at the Miracle Theatre is offering audience members such treats. It's all on display as part of a deliciously delirious production of the award-winning and nominated Murder for Two.

Also, the multi-award-winning theater has demonstrated during shows too many to count that it makes musical theater sing and soar.

And with Murder for Two, ahead of next season’s production of Agatha Christie’s Murder on the Orient Express, the Miami-area theater company hits the trifecta. That is, it can also keep an audience rapt for a whodunnit.

For its current production, running through Aug. 11, a key puzzle piece is Martin Landry. Certainly, this nimble, long-haired, bearded actor with an expressive face is a skilled performer.

Landry joined Murder for Two’s national tour in 2015. He appeared as (or stood by for) “The suspects” and/or Marcus at eight different theaters in seven different states.

In fact, if you’re a director, there are plenty of good reasons why you want Landry playing the suspects. For instance, with impressive spontaneity, he repeatedly and in a short time span, modulates his voice to credibly play a variety of characters. They speak and sing in high and low pitches. In addition, they assume a variety of postures and widely range in age.

Specifically, Landry plays everyone from a suspiciously apathetic widow to street-smart, wisecracking young boys. The youngsters speak with exaggerated New York accents (think Newsies). Often, all Landry does to change characters is adjust his glasses.

Meanwhile, Landry possesses a powerful singing voice. And, like his talented cast-mate, Mark Schenfisch as a wannabe detective, he excels at the piano. Both play difficult chords with seeming ease and use the entire keyboard like seasoned pros.

As a matter of fact, the actors double as the band, a la director John Doyle’s actor/musician productions.

To be sure, catchy and memorable tunes are highly desirable in musicals. But songs can serve other purposes in musical theater. For instance, in this show, melodramatic chords punctuate moments of intrigue or surprise revelations. As they play these chords, the performers’ eyes widen. This further accentuates the effect.

For the uninitiated, the highly theatrical Murder for Two is an homage to old-fashioned murder mysteries. Critics have described it as a blending of Agatha Christie, Sherlock Holmes, Clue, and the Marx Brothers.

True, the many plot details can make the show hard to follow. However, the performers’ antics are enough to make you want to snag a ticket. Clearly, Landry is the “funnyman” to Schenfisch’s “straight man.” The latter plays detective hopeful, Officer Marcus Moscowicz with an ambitious, dramatic air. In addition, he betrays a fresh-faced, green expression. Still, it’s clear that Moscowicz is, for the most part, all-business. That is, at least compared to the playful Landry.

Without giving away too much, someone has shot and killed a fictional famous novelist. The deadly deed occurred at his surprise birthday party in present day rural New England.

Of course, each of the characters might have a motive to want him dead. And just when you think, “here we go again, the usual suspect is the guilty party” you must think again.

At times, Murder for Two possesses keen dramatic tension. But some of the jokes are lame and corny. And a focus on Moscowicz sometimes lessens the suspenseful and dramatic momentum.

Regarding the music, one of the songs' titles is “Protocol Says.” It refers to the steps an officer should supposedly take to solve a crime. However, we could do with a few less utterances of the word “protocol.”

On a more positive note, the musical’s show-stopper is a flashy number titled “Steppin’ out of the Shadows.” It features seduction, showmanship and appropriately fanciful lighting by designer Eric Nelson.

Meanwhile, in a creative move that is visually appealing, one of the doors is adorned with oversized “books” which the deceased author had written.

In addition to its accolades, Murder for Two has proven popular. Following its world premiere in 2011 at Chicago Shakespeare Theater, its leaders extended the production four times. It ran for more than six months. Also, a national tour lasted from 2014 to 2016. Further, producers have mounted the show internationally.

With all this in mind, credit Actors’ Playhouse at the Miracle Theatre for identifying a highly popular show -- and bringing it to South Florida.

Actors’ Playhouse’ production of Murder for Two runs through Aug. 11 at the Miracle Theatre, 280 Miracle Mile. Performances run 8 p.m. Wednesday through Saturday and 3 p.m. Sunday. Tickets range from $30-$75. The theater offers 10 percent off all weekday performances for seniors and $15 student rush tickets to any performance 15 minutes before curtain with identification. Discounts are available based on availability. To purchase tickets, call (305) 444-9293 or visit www.actorsplayhouse.org.