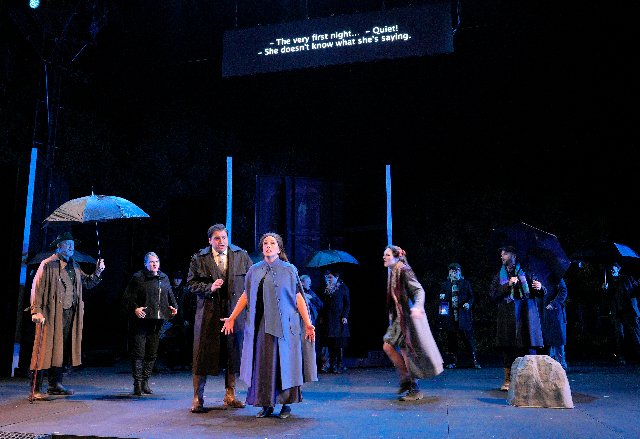 For several seasons, the innovative and peripatetic West Edge Opera has performed at various historic, industrial, and sometimes noisy venues, all with unsloped  seating.  This season, they have moved outdoors to the glorious Bruns Amphitheater in Orinda.  Its tiered seating provides comfortable sight lines that are greatly welcomed, not to mention a spectacular backdrop of golden hills with green riparians from its setting in the Siesta Valley.  Many thanks to California Shakespeare Theater, which holds a long-term lease on the venue.  Cal Shakes has facilitated other companies performing at this wonderful outdoor arena in its “Season of Shared Light,” providing a safer haven from the pandemic than indoor spaces.

In keeping with its tradition of producing operas that open new horizons for much of the audience, West Edge’s 2021 Festival commences with Leoš Janácek’s 1921 masterpiece, “Katya Kabanova.”  A stellar cast led by soprano Carrie Hennessey turn in outstanding performances to make this a compelling opera experience.

Until recent times in the United States, Janácek was a known but rarely performed composer, limited largely because of the difficulty of casting opera in Czech.  However, “Katya Kabanova” is exemplary of his searing dramas about common people who sing with the vocabulary, style, and rhythms of natural language, creating an authenticity that has found audiences.  His eclectic, somewhat dissonant 20th century musical style which draws heavily on folk music, especially Moravian, has created demand.  Although the format of “Katya Kabanova” is through-sung, it does contain some notable arias.

The opera is based on a Russian play, Nikolayevich Ostrovsky’s “The Thunderstorm.”  However, its passion also draws from Janácek’s own unrequited love for a married woman, like Boris’s love for Katya in the opera.  Needless to say, social convention in small town Russia in the 19th century was more restrictive than current day.  It bears noting that moral turpitude (if one even wishes to classify “illicit” affairs as such) derives not from possessing thoughts about socially-unacceptable deeds, but rather by the failure to prevent thoughts from translating to action.  In some cases, temptation is all but unavoidable.

Katya is a tragic figure. She is a young, attractive woman, caught in an unhappy marriage to Tichon.  He is not inherently evil, but suffers under the thumb of his domineering and socially-rigid widowed mother, Kabanicka, who makes life hell for the free-thinking Katya.  In the critical event of the narrative, the mother forces Tichon to go on a long business trip.  Katya knows that she will be tempted to make love with Boris if Tichon leaves and begs the husband to either stay home or take her with him.  He argues that his mother gives him no choice and denies her.  His absence marks the descent into Katya’s devastation.

It is good fortune that General Manager Mark Streshinsky and Music Director Jonathan Khuner had a history with Carrie Hennessey through her playing the lead in the company’s 2014 “End of the Affair.”  From her resumé, it isn’t apparent that she would be up to a demanding role of the magnitude of Katya.  Yet she totally commands it.  Dramatically, she captures the many emotions of the desperate young woman.  Musically, she captures those moods through the full vocal range and in both lyric and dramatic voicings.  These contrasts are particularly well expressed when she is conflicted, as when she first meets Boris and admits both her love for him along with her guilt and wishing to die.

The opera is set “with a nod to 1950s California.”  A few furniture pieces are consistent with midcentury modern design, but décor features like sepia-colored prints and an antimacassar don’t fit that period.  In any case, the predominance of institutional green wall coloring is dreary.  A true representation of the 20th century, perhaps bright looking in contrast to the dark action of the opera might be interesting, but otherwise full-on traditional version would work well.

The orchestra endures somewhat daunting conditions, placed completely under the stage with only a small aperture onto the apron.  Amplification is required to produce satisfactory volume (though singers voices come through with great power and clarity without mics).  On opening night, the striking introductory sequence with a deep and long held chord followed by a brief melody and timpani motif was muffled and almost lost, perhaps because the sound controls hadn’t yet been optimized.  Overall, the orchestra seemed to fare better when the instruments’ soundings had greater separation, but they occasionally seemed a little out of sync and tune during tracts demanding greater unison.

In sum, with “Katya Kabavona”’s powerful score and intense drama, Janácek expressed his full maturity in the vocal genre.  It is a classic, and West Edge’s production is well worth seeing.