The Inimitable Marlis Petersen in Munich

A Journey into Night and Our Psyches 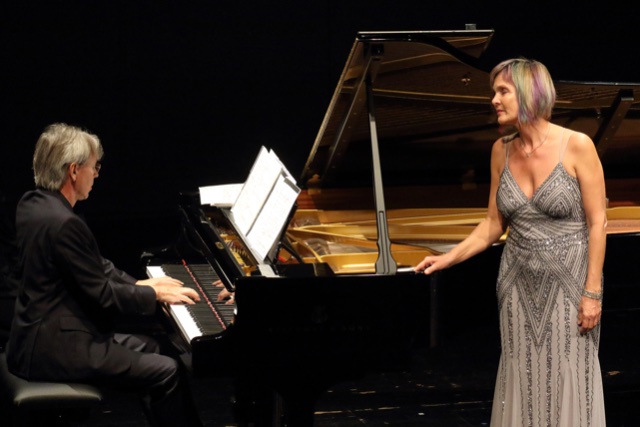 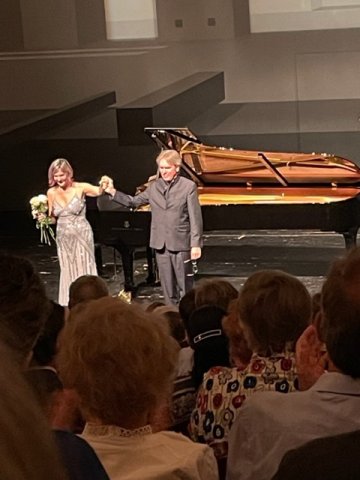 Marlis Petersen is known as a consummate actress, a talent, she says, God gave her.

On stage at the Prinzregent Theater in Munich, this talent is heightened, with Petersen herself the warm and entertaining performer who even helps an audience member stop coughing.

Usually the relationship between singer and accompanist is not clear at the start of a song, but Petersen and her pianist partner, Stephan Mattias Lademann, ritualize the beginning as they move to an interior space. Petersen leans into the piano and bends her head slightly, gives a slight hand signal when she is ready and then waits for the piano introduction to begin as she turns to us. We are being invited in. This sequence of gestures has deep meaning in an evening of songs devoted to our interior spaces.

In a grey shimmering sequined dress that caresses the body, Petersen shines on stage as her voice easily fills this hall.

The program begins with German lieder and outside the construct of moving inside, Karl Weigl’s Seele is sung as an introduction. We are in a harbor, sailing out to the stars. Then we are in a Richard Strauss' night as our journey commences.  Petersen unleashes blossoms and colors in her rich yet delicate voice.

There is fun on the journey, and it is expressed particularly in triplets dancing on the piano and the inviting emphases of Petersen’s voice.

Both pianist and singer are able to draw us into the journey on a quiet yet subtle path. Often Lademann would conclude a song alone, lifting his hands above the keyboard before the last note or phrase, and then, almost inaudibly concluding. This felt less like an unwillingness to stop than another step on a gentle journey. Chanson Triste of Henri Duparc is full of this feeling added to the perfume of French song.

Petersen spoke the poet’s words before she sang Hugo Wolf’s Gebet.  It was a striking transition into song.

Wow.  When they want to unleash their gifts, both artists can. Max Reger’s Schmied Schmerz is virulent as a poem about pain should be.

Petersen is an adventurer. She swang from a church ceiling singing the soprano solo from the Brahms Requiem, undressed for Berg’s Lulu and simply enchanted in Strauss’ Die Fledermaus. Her coloratura voice is flawless When she goes ever higher and higher on her swing, she touches the sky with heavenly sounds. Her notes course through the audience with sheer pleasure.

Her debut as Elsa in a new production of Lohengrin in Munich late this year is an event to attend. Kornél Mundruczó, the award-winning Hungarian film director, is making his Munich debut in this production.