And Away We Stared 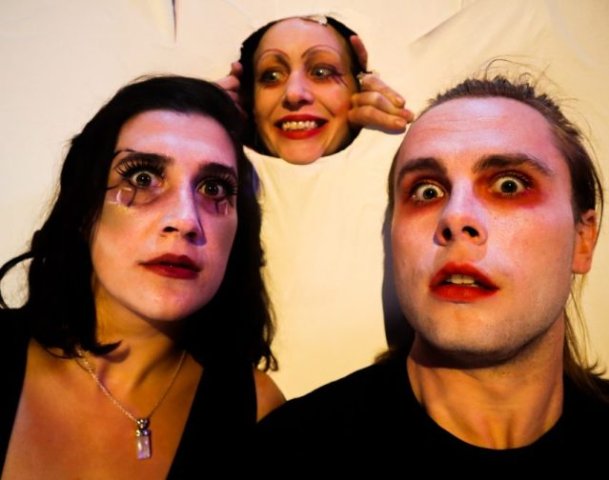 Trap Door Theatre’s new production, And Away We Stared, is an example of “devised theater,” a mode of expression that’s been popular in the theater community for years. It‘s a process that starts without a formal script and involves collaboration and sometimes improvisation among directors, cast and crew.

And Away We Stared is an inventive and theatrically imaginative production, using text from the works of writers Charles Mee, Gertrude Stein and Matei Visniec, a Romanian-French playwright frequently produced by Trap Door. The theater is committed to “seeking out challenging yet obscure works and bringing them to startling life on stage” and they’ve succeeded here. The premise used by director/devisers Skye Fort and Mike Steele is that mechanized performances are being staged because humans are absent.

The production is a series of scenes of varying lengths, sometimes with dialog, muffled sounds or music, sometimes without. Sometimes with detritus falling or fluids dripping. Sometimes with inanimate objects in motion as if motorized. Eight actors create these scenes in  which they “attempt to retake the stage, confronting notions of live performance, automation, and the cycles we perpetuate” throughout all the theater spaces—backstage, on stage, in the lobby, and sometimes sitting in the very seats where I’ve sat to see Trap Door’s live performances (and hope to sit in again). You’ll experience the event from your own viewpoint, but these are a few of the things you’ll see in And Away We Stared.

In one scene, the actors sit in theater seats like audience members, before moving to the small Trap Door stage for stylized movements, after which they all fall on their backs on stage. Another scene, perhaps influenced by a psychology lab, provides many answers to the question, How would you kill a rat? We also see a closeup of an actor applying makeup (designed by makeup artist Zsofia Otvos). Two women are viewed through a round window in a love scene punctuated by a man vigorously brushing his teeth. At a dinner party (a birthday party, perhaps), four people sit at a table wearing colorful rubber gloves and receiving objects that pop through a window at their side.

The five acts (lengths from 30 minutes to a minute or two) conclude with “Caught Alive,” which begins as a dance party  and ends as the title might suggest.

Kellie Wyatt is set and props designer with costumes by Rachel Sypniewski. Sound design is by Mike Steele, composition by Emily Nichelson and lighting by Richard Norwood. Text translations are by Adam J. Sorkin and Lidia Vianu.

And Away We Stared, a virtual production, opened with two livestreamed shows July 23 and 24. The filmed production will be streamed to home audiences in an open run at 8pm on Thursdays, Fridays and Saturdays. The filmed stream will be here about August 1, the theater says. Tickets are $10. Running time is about 65 minutes.