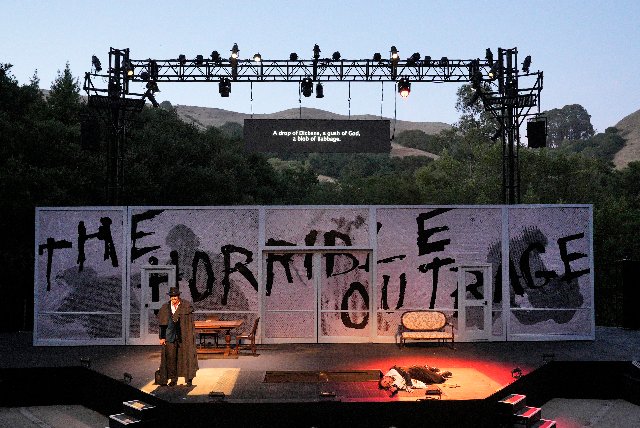 Murder!  Mayhem!  Ghoulish entertainment for the lower classes!  Terror in the night on the foggy, shabby back streets of Victorian London!  It sounds like the makings of a Gothic suspense novel.  But an opera?  With a canvas that is the amalgam of a 19th century English music hall milieu, a courtroom trial, and serial murders, it hardly seems likely.  Of significant works intended for the opera house, only Alban Berg’s “Lulu” comes close to being as lurid.

In “Elizabeth Cree,” the eminent Pulitzer Prize winning team, composer Kevin Puts and librettist Mark Campbell, have crafted a score and a darkly comic libretto with Gothic atmosphere that is absolutely riveting.  West Edge Opera’s stellar new production at its wonderful outdoor venue channels the creepiness of the events even at a broad daylight matinee.

The opera is loosely based on fact.  Elizabeth Cree suffered a hard scrapple upbringing with a mother who badly abused Elizabeth’s genitals as punishment for the girl’s having been raped.   However, she rose from the bowels of society to catch on as a performer with music hall troupe.  Later, she met and married John Cree, a literary critic and failed writer but with a comfortable income from his family.  John would be implicated in a series of Jack the Ripper like murders but would die from a dose of poison administered by Elizabeth, who would be tried for his murder.

Like the company producing it, the opera is edgy in every way.  The plot line is delivered briskly in a series of 29 vignettes that move back and forth in place and time.  At one point Elizabeth reveals her unhappy childhood and at another her sexual frigidity.  Vaudevillian-like music hall entertainers in silly costumes amuse us.  Real-life luminaries Karl Marx and George Gissing are encountered at the reading room of the British Museum, also frequented by John Cree, and are interrogated on the witness stand of the trial.  Most vividly, we see the scenes of the swarthy, rakishly handsome John Cree enacting and describing in gory detail the bloody, precise vivisection of the murder victims.

The composer’s dizzying score engages throughout with the same rapid movement as the scenes.  The orchestra tinkles and tingles and screeches and pounds like a punch in the gut.  It soars as Cree contemplates impaling the next victim.  But at the same time, the music allows for a variety of lyrical vocalizations which are delivered with consummate skill.

Mezzo Katy Pracht soars as Elizabeth with a mellow voice and full vibrato, conveying a panoply of enigmatic emotions from her lost innocence to her deadly scheming.  But her murderous character is mundane when contrasted to her male counterparts.  Pracht’s real-life husband, Keith Phares, portrays the sinister John Cree with flair.  His silky, rounded baritone includes a lilting high end and warm vibrato.  Finally, Samuel Faustine is the brassy and gaudy comedian Dan Leno, the head of the music hall performers.  His versatile tenor voice includes a well-controlled countertenorish high end that is put to great use in low volume passages.

This opera may not have the gravity of Verdi or Mozart works.  However, the score is multifaceted, fitting, and eminently listenable.  Not to mention, the libretto is clever in structure; gripping and engaging; and as propulsive as the music.  To top it off, there is an element of suspense with an intriguing denouement.  The West Edge production touch is a perfect fit to this delightful opera.