She Stoops to Conquer at Williamstown Theatre Festival

Pulling Out All the Stops for a Nicholas Martin Production 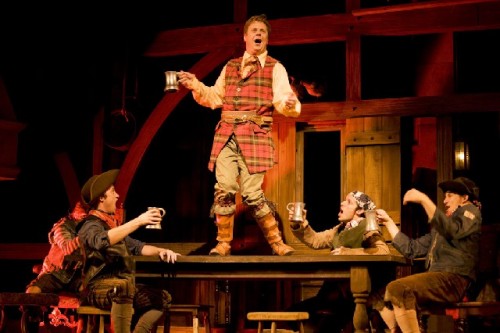 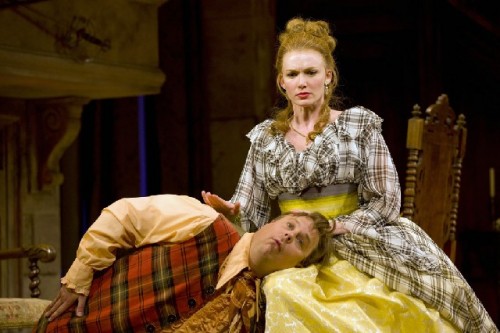 Tony and Miss Neville (Holley Fain) his intended about whom he doesn't give a fig. 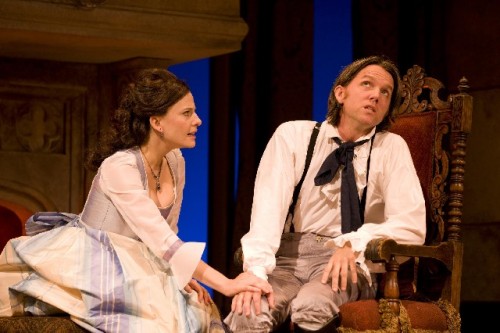 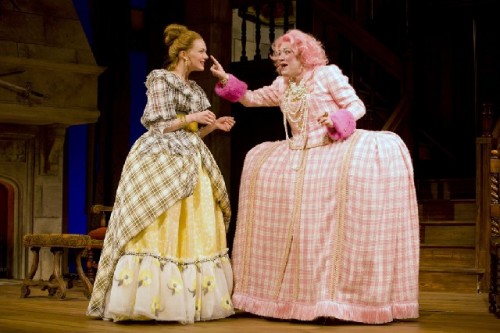 Miss Neville is the niece and war of the scheming Mrs. Hardcastle (Kristine Nielsen). 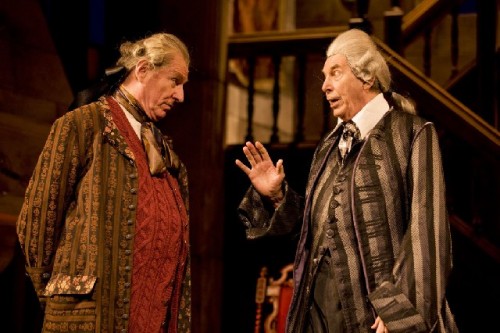 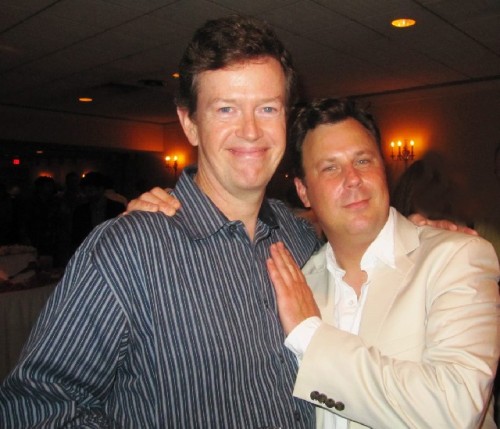 During the opening night party Brooks snuggles up to Dylan Baker. Giuliano photos. 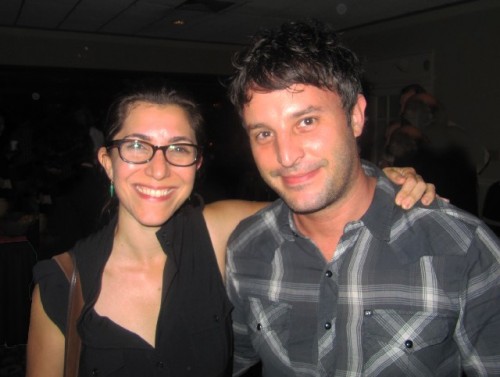 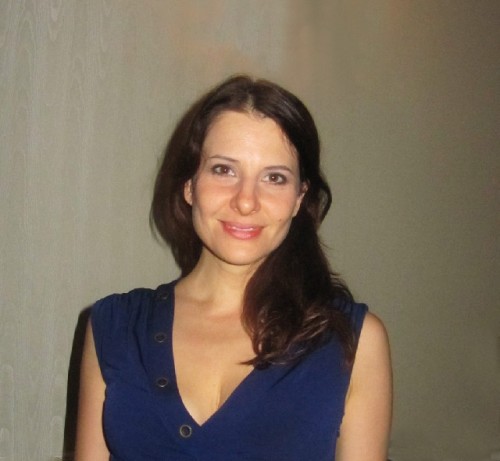 Mia Barron unwinding after her performance as Miss Hardcastle. 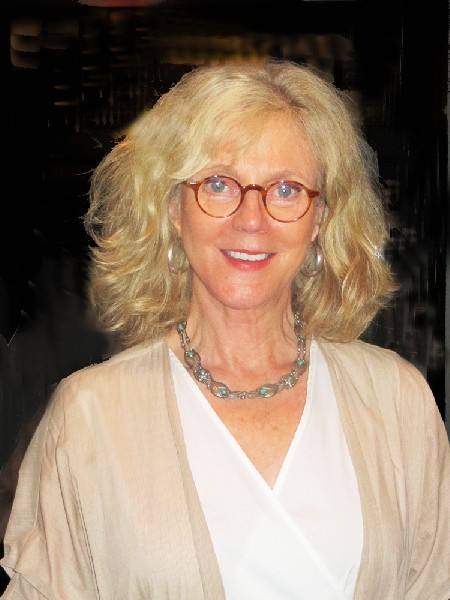 WTF alumna Blythe Danner was on hand for opening night of Stoops.

In a stunning and sumptuous production Williamstown Theatre Festival has pulled out all the stops and spared no expense in staging Oliver Goldsmith’s 1773 comedy She Stoops to Conquer.

Now mid way in her first season as artistic director of the summer long festival Jenny Gersten offered carte blanche in inviting back Nicholas Martin who preceded her for the past three seasons.

Or is that Visa, Master Card or American Express?

The audience applauded when the curtain was raised to reveal an amazingly complex set by David Korins. It created the look of an 18th Century rural castle complete with enormous fireplace, antlers above, a twisting staircase to a well used upper level, swaths of wood panels, and lots of doors for actors to make swooping entrances. There was also well appointed period furniture. And a neat mechanical trick, when a table rose out of the floor of the drawing room of the castle, to create a tavern scene. Or when rows of shrubbery were pushed in from the sides of the stage to quickly create the illusion of a garden scene.

Wow. Must have cost a bundle. It is also incredible that in season the scene shop creates and installs such complex and detailed sets on such a tight schedule.

And the costumes of Gabriel Berry. OMG. Rarely have we seen a production more exquisitely and spectacularly dressed. The absurdly dressed Kristen Nielsen as the over the top, total gonzo Mrs. Hardcastle was ridiculously hilarious beyond belief. She resembled a huge ball of the kind of cotton candy we consume at a carnival. Her character was indeed a brilliant comic confection. There was a matching pink wig of the kind that we associate with the wonderful Mrs. Slocum from the PBS comedy series Are We Being Served.

The costume designs of Berry also made great use of the theme of plaids to convey a Highland or at least rural setting. One of the gowns of Miss Neville (Holley Fain) riffed on Burberry when she donned an outer garment to make her escape and elopement from the home of the Hardcastles.

That ultimate silly billy, the comic genius, Brooks Ashmanskas as the prankster (Tony Lumpkin) who manipulates and energizes the screwed up plot line, was tricked out as an ersatz Scottish bumpkin in a mid thigh length, screaming tartan. He often flipped it up like a fay skirt in outrageously mincing torsion as he pranced, cavorted and catapulted about the set.

Ashmanskas is so hilariously brilliant that he doesn’t need a script to keep us in stitches. In his first appearance of the evening he flew across the stage with flips, winks and nods. With nubile physical comedy and sight gags he informed us of the raucous hilarity and mischief that lay ahead.

The play She Stoops to Conquer is one of those classic works that get studied and discussed by drama students. The trick here is to dust it off, tarten it up, and play it for laughs.

As brilliantly directed by Nicholas Martin with, as usual, lots of help from his WTF friends, this is an experience that is just fun, fun, fun till daddy takes the T-Bird away.

What informs the comedy is the now superannuated notion that maidens of well appointed families like the Hardcastles marry the suitors approved and encouraged by their parents. One simply did not marry for love. Although that drove the plot of many a drama or comedy. Indeed, as it does here. No, marriage is about security, dynasty, peerage, and property.

Of course, it helps if there is a bit of sexual chemistry in matches concocted by eager parents.

There is none, zip, nada, between the rakish Tony Lumpkin the son of the absurd and greedy Mrs. Hardcastle and his intended Miss Neville. If the marriage is consummated the treasure trove of jewels which she will inherit will remain in the family. Mrs. Hardcastle, as her guardian, has them securely or not so, as the plot thickens, in her possession.

Tony, who when he comes of age will have a thousand pounds a year, could give a fig about Miss Neville, or girls in general, as played by Ashmanskas. He is more interested in pilfering jewels from his mother to support his drinking and gaming at the merry Three Pigeons Alehouse. He longs one day to squander the inheritance in London. Imagine him in Hogarth’s cycle of paintings depicting A Rake’s Progress.

In the 18th century there was a remarkable difference between French and British aristocracy. The French nobility were required to live in small apartments at Versailles under the nose of the King who ruled as an absolute monarch. They gathered twice daily for the levée and coucher in the king’s bedchamber. Only at the discretion of the king were they allowed to leave court to spend time on their estates.

For the British aristocracy they mostly resided on their country estates coming to the city, to reside in Town Houses, in season when Parliament was in session. In this play Mr. Hardcastle is wealthy but not titled and as such has no regular business in London. But Mrs. Hardcastle would love to “Rub the rust off a little” and enjoy the London season. Mr. Hardcastle is quite content and a true provincial.

Goldsmith makes much of the contrast between town and country in the characters of the two gentleman Charles Marlow (Jon Patrick Walker) and his companion George Hastings (Jeremy Webb) the son of Sir Charles (Richard Easton). They are men of style and fashion as neatly costumed by Berry. Just to look at them establishes their aristocratic difference from the rural Hardcastles. Add to this their exaggerated manners and autocratic ordering about of servants and social inferiors.

Including, in a running gag, Mr. Hardcastle whom, through a deception and prank of Tony, they assume to be the landlord of a lavish country inn. Charles who is squirrelly with women of his class has been sent packing by his father to check out Miss Hardcastle (Kristine Nielsen) as a potential mate. The first meeting is a sham. But she cleverly dresses down and reappears as what he assumed to be a tavern maid in a simple rustic tartan dress. With flair she widens the gap of her bodice giving him a better gander at her ample boobs.

While Charles is a disaster as a suitor of courtly women he is smitten and would like to get it on with what he assumed to be a tavern wench. Of course she is too clever to allow that without a commitment. She is indeed a woman or property and no easy tart.

And so it goes running about, up and down the stairs, in and out of the slamming doors (this predates the five doors of farce but they are here nonetheless).

Eventually all is neatly resolved. The lovers find their mates. And Tony, now of age, by three months it seems, is set to drink himself to death and enjoy the favors of the bounteous and low born Bet Bouncer (Elyse Steingold).

We exited the theatre feeling thoroughly entertained by a fine old comedy.