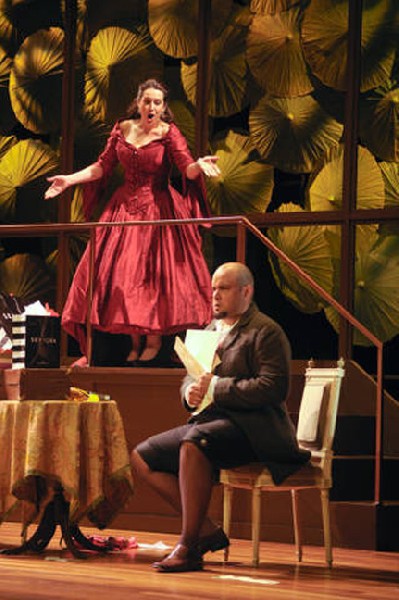 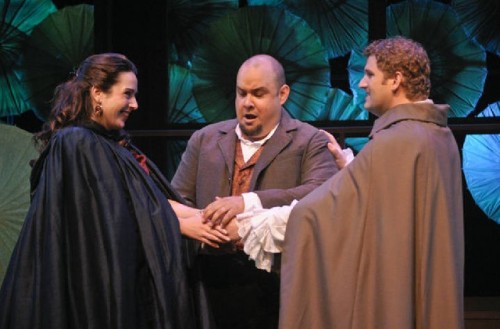 Leslie Ann Bradley as Norina, Ricardo Lugo as Don Pasquale, and Alex Richardson as Ernesto in a scene from Boston Midsummer Operaâ€™s production of Don Pasquale. 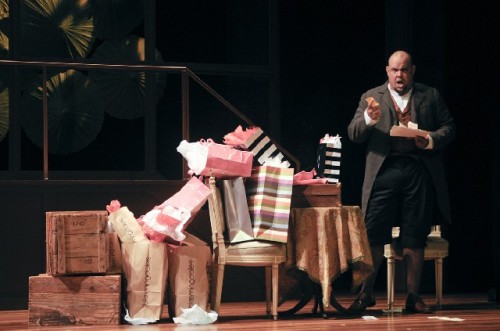 The folks behind Boston Midsummer Opera have it pretty much right. In the summer, classical music hereabouts is in self-imposed exile. If you want to hear it you have to travel to the Berkshires where Tanglewood reigns, mostly on reputation, as America’s premiere summer music festival, to southern New Hampshire for Monadnock Music’s varied offerings or to Rockport for the chamber music program of the Shalin Liu Performance Center. (And there’s Aston Magna, Marlboro Music, etc. The list is long and often distinguished.)

So, they reason, let’s stage an opera in July when local opera lovers are starved for something – anything, really. And they are smart in that they don’t overreach – one opera only, not a season. And for the most part they keep it light – comedies by Mozart and the Italians, Rossini and Donizetti, who followed his model so closely. They have also decided to have the works sung in English, a decision I am less happy with. But more about that later.

Boston Midsummer’s 2012 presentation – its seventh since 2006 is one of the frothiest in the repertory – Gaetano Donizetti’s 1843 madcap romp, “Don Pasquale.” The company largely succeeds with it, turning out, on an obvious austerity budget, a light, musical, well-acted and well-sung, comedy, guaranteeing a fun evening in the theater. If it is not entirely as effervescent as it asks to be, well, perfection is seldom encountered in the world of opera.

The story is a hoary one, based on characters and situations from the Italian Commedia dell’arte. In brief: A miserly old man, the Don Pasquale of the title, decides to marry, his preference, of course, a young girl. He also plans to disinherit and evict from his shabby palazzo his nephew Ernesto. The scheming Doctor Malatesta, his supposed friend, proposes his “sister” Sofronia, straight out of the convent, for the bride. She is, in fact, his nephew’s beloved, Norina. Immediately after the phony wedding contract is signed, Sofronia turns into a shrew, berating her husband and spending his money like a veritable Queen of Versailles. Fed up with her, he ends up blessing her marriage to Ernesto, and all ends well. As Dr. Malatesta sings, in very pointed English, “There’s no fool like an old fool.”

Donizetti’s genius for comic musical invention makes the tired story fresh, one that remains lively and modern 160 years after its premiere. There are enough serious moments like Ernesto’s heartfelt aria of dispossession and the duet between Norina and the Don after she strikes him to give the work some emotional weight. And the “real” character Norina is the opposite of the simpering convent girl she plays - she is a spitfire in charge of her fate, like Rossini’s Italian girl in Algiers, a proto-type of a feminist heroine.

Susan Davenny Wyner, a former singer herself, led a bracing performance, the small-scaled orchestra alert to her intentions. Stephen Dobay’s set was minimal, dowdy but dull in the fist two acts and then brighter and more inventive once Norina has the decorators bring it up to date. (The use of Japanese umbrellas as a forest for Ernesto’s serenade was both beautiful and witty.) Charles Schoonmaker’s costumes were largely period – Don Pasquale’s suit, which made him look like New Jersey governor Chris Christie squeezed into Dolce e Gabbana, was especially funny and apt – but why was Ernesto wearing jeans? To make him look like a member of the younger generation? Then why wasn’t Norina dressed like the Girl with the Dragon Tattoo? Austin Pendleton’s direction was merely efficient.

The quartet of leading singers was well balanced. And they made up for any vocal fireworks they might have lacked with their precision comic acting. As the Don, bass Ricardo Lugo, was pompous, vain and flummoxed as the role demanded. He sang mellifluously. As Norina, Leslie Ann Bradley looked glamorous and played the part for laughs. A supple soprano, she tossed off vocal ornaments with ease. Her young lover Alex Richardson as Ernesto acted less agilely than the rest of the cast and his tenor was pinched from time to time, but he convincingly put over his two famous arias, “Povero Ernesto …cerchero lontana terra,” when he is depressed about being evicted from his uncle’s home and losing his lady love, and the lovely serenade “Com’e gentil,” the latter with real vocal allure. David Kravitz, a dependable character actor in Boston’s small opera world, acted and sang with comic verve. Alas, the dueling duet between him and the Don, each iteration of the text faster than the one before, wasn’t up to golden age standards. Still, it elicited both cheers and laughter.

The audience seemed to love the evening, as did this critic, who was, he admits, in less than a good mood, the heat wave having gotten to him.

How much of it had to do with hearing the work in English, the ostensible language of the audience - although the woman seated next to me read a book in Russian during the intermission - is a good question with no answer.

Having lived in St. Louis for seven years, where the late-spring opera festival puts on every opera in English, I have developed strong ideas about the practice. Basically, I’m agin’ it. Especially in the days of supertitles, there is no trouble understanding what’s going on in an opera, although critics of the practice rightly point out that the audience ends up reading the opera rather than hearing it. In St. Louis the company controversially added supertitles to its productions a few years ago, so you had singers singing in English along with the English text projected on screens. What’s next – mimes paralleling the action? (They did that once at the San Francisco Opera to ludicrous effect.)

In general, I’d say that opera sung in English is best for operas written in English, but there are only so many of them – a diet of Benjamin Britten, Gian Carlo Menotti and John Adams is awfully limited.

But to be non-ideological, I'd add that English translations tend to be acceptable for Mozart and comedies, and I can offer two examples. Years ago, I heard two productions of Verdi’s “Falstaff” in Boston. The touring production from the Met was sung, de rigueur, in Italian, without supertitles. The subtlety of the humor was totally lost on the audience and the cast resorted to physical humor of the crudest nature to get a laugh. At the same time Sarah Caldwell put on a production with Andrew Porter’s witty English translation. The audience was enchanted, laughing along with the humor of the text, not responding to vulgar physical cues.

The other example is Mozart’s “Abduction from the Seraglio.” By chance, it was the last production I saw at the San Francisco Opera, which did it in German, and the first opera I heard in St. Louis, which did it in English. In San Francisco, it was a deadly evening, which wasn’t helped when the young German soprano who sang Costanze had to stop singing in the middle of an aria because it was too difficult for her – yes, these things happen even in major houses. And it was a delight in St. Louis, the audience following the action without having to read texts. And it helped that it was put on in a small house where the young singers didn’t have to bellow to be heard in the balcony, which I am sure was part of the problem the poor soprano in San Francisco faced.

But, I never want to hear “Tosca” or “Carmen” in English translation. In fact, it ought to be against the law. I heard both in St. Louis in English, and I vowed after the “Carmen” never to hear another tragedy, especially one so central to the opera repertory, in a language other than the one for which it was written. (Boston Midsummer Opera did a “Carmen” a few years ago. I have no idea if it were successful or not, but I have also noted that it has subsequently stuck to comedies or works written in English.) Because of my vow, I missed what was rated as one of the most exciting productions the Opera Theater of St. Louis presented during my years there – Richard Strauss’s “Salome.” (The Salome was Kelly Kaduce, who in her early career, sang with Boston Midsummer Opera.) The idea of “Salome” in English totally turned me off. Of course, the original text was by Oscar Wilde, but he wrote it in French, realizing perhaps the inappropriateness of the language of John Bull for such a decadent piece of Orientalism.

Still, maybe one explanation for lack of effervesence in the production might have been the absence of the Italian language of the original. In a great opera, whatever the language, the text and music work together because they were created together. Even in translating from Italian to French or vice versa, two Romance languages, much is lost. (Verdi and Donizetti, who produced operas in both languages, struggled with the problem.) Italian is a “singing” language, which might explain why the genre developed there. English, less so, which might explain why the genre is so hard-won in English-speaking lands. (And then there is German – oy vey!) When I got home from the opera, I put on my only CD of the opera, a mediocre 1963 production from the Vienna State Opera, but, vocal inadequacies aside, as a whole, it sang! The Italian text added to the musicality in a way that the English translation used here did not. Music and text were one.

There really is no solution. Even when the opera is written in the language of the audience, much of the sung text is not heard, especially high soprano and low bass voices. That’s one of the reasons opera texts are repeated so much – to get the basic idea across. And that’s what’s important – to get the basic idea across. Opera is not spoken theater – and even then, how much of the audience catches every word in a play by Shakespeare? Opera is music theater, and the music communicates as much as the text, if not more. (There have been charged debates by minds greater than mine on the subject, and Strauss wrote one of his greatest works, “Capriccio,” on the theme of what is more important in opera, words or music - or spectacle, as the vulgar impresario insists.) And it explains why the opera audience returns year after year to hear the same limited repertory. Simply, they want to understand it better while they wallow in its sound world, absorbing the truth of the work non-verbally.

Opera is intoxicating, addictive, but you know you’re never catching the whole thing. Maybe the fifth time you hear “Boheme,” in Italian, English or Serbo-Croatian, you will really “get” it. (The tenth time - maybe?) In any case, with all its legendary disappointments – a stupid production, a soprano who misses her high note, a fat tenor, a sloppy chorus, a sleepy conductor, the uncomfortable seats - it is arguably the greatest artistic pleasure created by man (and occasionally woman).