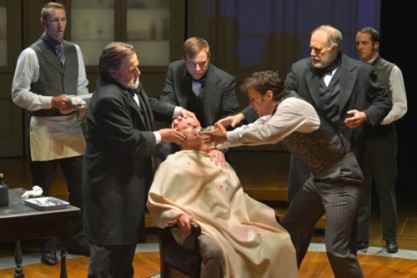 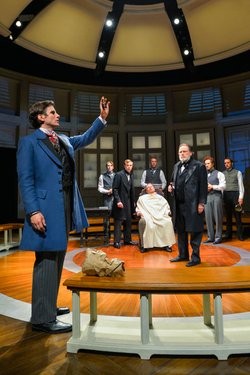 Along with the patient putting the audience to sleep.

When a new medical treatment promises to eradicate pain, a doctor and his student play out an epic battle between altruism and ambition (think big bucks).  Based on the true story of the discovery of ether as an anesthetic in 1846, “Ether Dome” written by Elizabeth Egloff, and directed by Michael Wilson, is a fascinating subject for exploration regarding the subject of pain and the quest of medicine to conquer a condition that has afflicted human beings since the dawn of time.

The premise of the play sounded quite intriguing.  I have often wondered how patients of dentists and surgeons tolerated the pain and the infections over the centuries especially in the case of wartime amputations of limbs. The truth is they didn’t tolerate the pain or infections.   Mainly they died.  If one wanted to live a long life in those days, one gave surgeons and dentists a wide berth, and avoided serving in the military, and hoped for the best.  Medicine, thankfully, has come a long way in the last 150 years or so.
Playwright Egloff’s thrust of the story she wants to tell, however, comes across as more didactic than theatrical in its execution.   As the story unfolds one gets a sense that the plotline and narrative components would be better served as a movie rather than as a play.

The play opens in 1846 Hartford, Connecticut, in the dental surgery of Dr. Horace Wells (Michael Bakkensen) where a tooth extraction procedure is taking place.  Watching scenes of actors performing grisly medical operations and crude procedures, and all that goes with it – reacting to pain and trauma – in the 19th century was existentially disturbing for some in the 21st century audience (gasps punctuated theses scenes depending on one’s tolerance for witnessing pain, blood and gore).

Apparently, entrepreneurs are immune to such vicissitudes of life.  When William Morton (Tom Patterson), a former student of Dr. Wells learn about out the strange power and effect of nitrous oxide – laughing gas – at a sideshow event they both attended, each reach a conclusion but not the same one. Wells is altruistic in his quest to relieve pain for society.  Morton sees a commercial application to the medical breakthrough (the seeds and beginning of the healthcare industry are thus born).

Then, as now, money and security are foremost.  Any new business needs capital to begin and to grow.  The staid and stuffy cream of Boston’s medical community are skeptical to all new medical discoveries unless it comes with a Bostonian accent. With such high stake ventures, come patent protections, trust and ownership issues that vie with fame and future riches.

“Boston Brahmin”, Dr. John Collins Warren (Richard Hoxie) founder and Head of Surgery, Massachusetts General Hospital and Harvard Professor of Anatomy and Surgery is cautious about new miracle treatments.  Dr. Charles Jackson (William Youmans) is a bright chemist and a former student of Warren’s who is secretly working on a new compound to suppress pain later to become known as ether.  These four characters become the focus of Egloff’s play; and how each clash in egos and goals as they interact with one another in their day to day professional worlds.

Compelling as the subject matter may be, the action of the piece comes off as sluggish; periodically engaging the audience, only later to “anesthetize” them (pun intended) by having the story wander to Paris, France, New York City, and then back to Boston.

The stealing of ideas, patents, business betrayals of one another’s trust, and behaving badly in general on the part of business is certainly not new material for examination by playwrights. One will never run out material of this type as long as there is one breath left in commerce and banking.  This time it’s Big Pharma, next time it will be Big Finance and the beat goes on.