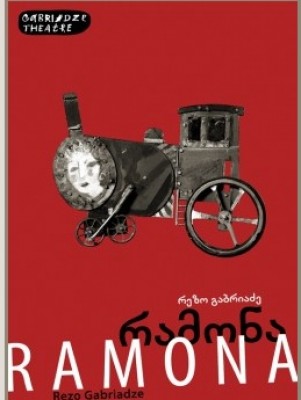 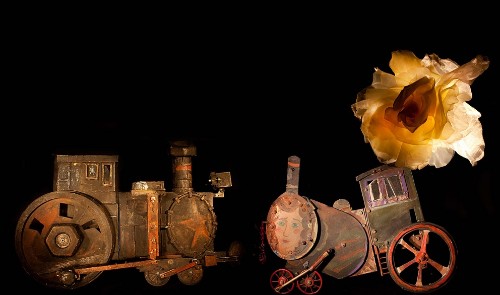 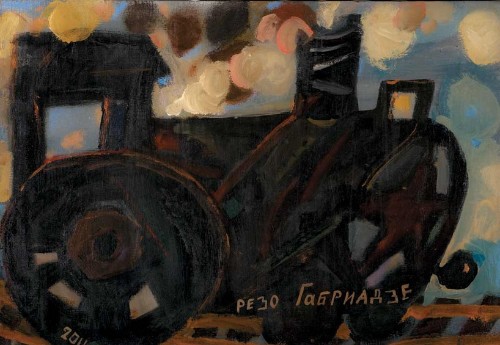 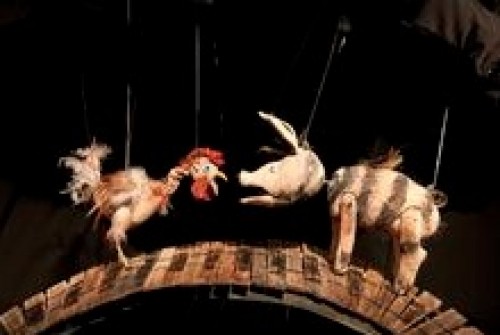 Celebrate the third trip of the Gabriadze Theatre to the Lincoln Center Festival.  The production of Ramona is enchanting.  Despite a tragic ending, the evening is an uplift.

In the US, we think of trains as Thomas, or the Little Engine that Could.  Gabriadze is clearly entranced with their romance.  Recently traveling up the coast of California on the Coast Starlight, I too was swept by the sense that trains are out of time. They can transport us to other worlds. Gabriadze's mother thought they were the last modern technological innovation that she could understand.

What Gabriadze so clearly understands is puppets and their staging. As the velvet curtain slowly opens on two distant trains, passing like ships in the night, or knights on a chessboard, we sense that this story will delight. Little lights are the night windows on the train. The darkness makes them feel alone in the world.  The old man on the road reminds us that everything comes in twos.

Ermon is a steam engine who has been sent to Siberia to rebuild Russia after World War II.  Ramona is the stay at home partner. She is a shunt engine who assembles the cars of trains getting ready for a road locomotive to take over.  Of course Ramona would like to go with Ermon, but she is apparently destined to go back and forth 1,000 feet. That's it.

Gabriadze started out as a film maker and got tired of Soviet censorship.  He asked to work in the theatre, but was told he would have to join  the Communist Party to do this.  Puppets, he asked?  And was told that they would not require party membership.

So he embarked on a magical journey which we are fortunate to watch unfold. Periodic references to Jews and trains, to Siberia, and to the taboo against defying authority remind us of where we are. Words subtly sting. Voices are well-known Russian and Georgian actors.

The station in Gabriadze' home town Tbilisi, Georgia is not unlike the station in the show. A hen and a pig could well meet on a railroad track. The pig is cautious, leaving town around Christmas time. The hen captures a red fox stole from a passing train in which a couple dash back and forth in the car contemplating divorce and the distribution of goods.

The circus people in town are about to be jailed for collecting ticket money and failing to produce a show. They look to Ramona for help.  Echoing through the story is Ernon's mantra: never say no to those in need.

Ramona says yes, and becomes an aerialist before she comes to her untimely death, reaching ever higher as she glimpses Ermon's smoke nearing.  Ermon chooses to be immolated in a funeral pyre of wheels and bolts and other train body parts. Now they are two again.

Each of the figures is carved with particular charm.  They vary from classic puppets like Babakhidi, the circus impresario, and Samarkandsky, his sleazy sidekick, to the charming tiny pig and hen, and then, of course, the engines.

Scale is observed. At one point Ramona disappears, getting smaller and smaller, until a cupped hand is large enough for her to enter.

The show begins with its parts being created. A man draws chalk track lines on an elongated rectangle. At the end, the smoke of engines fills the stage.

"I wish all your tears only to be caused by onions" is carved on Gabriadze's home theatre. The sad conclusion of Ramona is so warm that no tears come. Anyway, all tears have already been spilled by two members of the theatre troupe: Alas and Alack.

In a post show talk back, Leo Gabriadze, Rezo's son and producer, discussed puppetry with Cheryl Henson who runs the Jim Henson Foundation. The whole family is engaged in the enterprise and the production emerges from this tight environment. It is the vision of one person, but realized in intimate relations with the family. Listening to two family members discuss their roles in great puppet traditions, you could see why the form holds such charm.