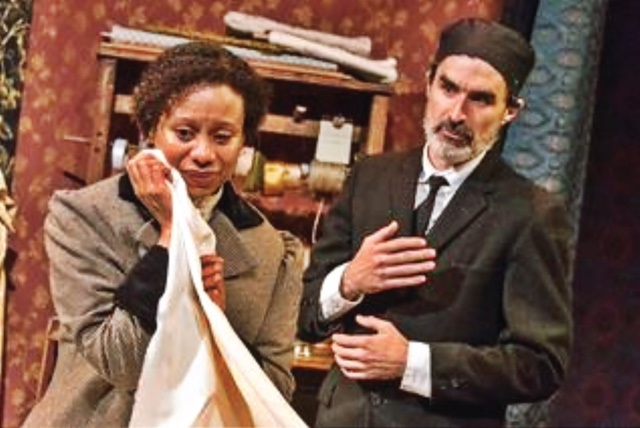 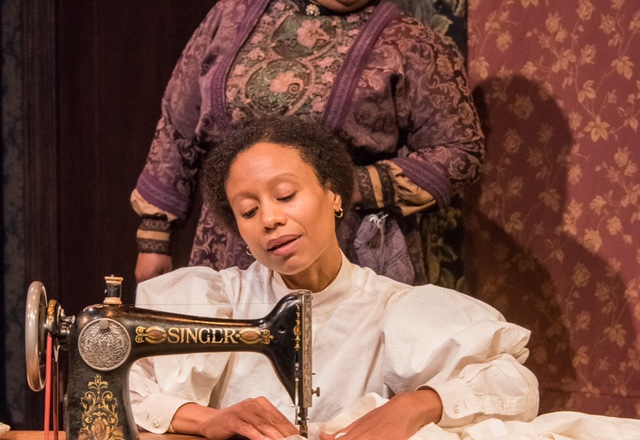 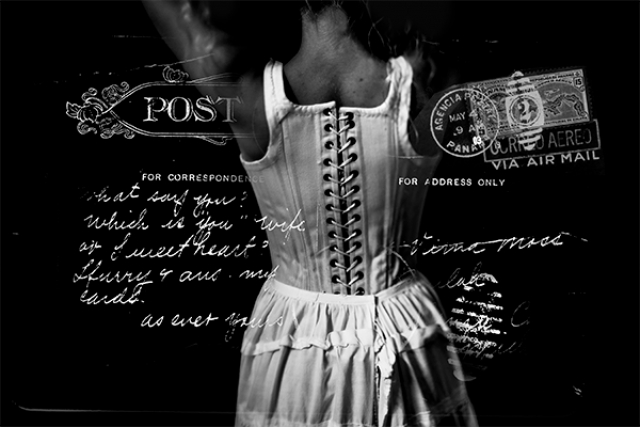 Intimate Apparel, a play from 2003, clearly demonstrated the playwrights talents early on.

Nottage (the first female to twice win the Pulitzer Prize for Ruined in 2009 and Sweat in 2017)  was inspired by the life of her great-grandmother.  It centers on Esther, an African-American woman of 35 who is illiterate and a very talented seamstress.  Esther makes fine lingerie for Fifth Avenue ladies and is truly grateful for the God-given skills she has.

Esther is all too aware of her limited options, especially as she passes her 35th birthday.  Her friends in the boarding house where she lives are marrying, and while she has a dream of opening a black beauty parlor with her substantial savings (hidden in her beautiful quilt), she is lonely.

Her landlady, Mrs. Dickson, (confidently played by MaConnia Chesser) whom she has known for 18 years, has made her own marital compromises, and is happy to have Esther at the house as a friend and companion.

But Esther begins to receive letters from a man named George Armstrong, a laborer working on the Panama Canal.  This necessitates Esther confiding in Mrs. Van Buren, her client and a disappointed matron on Fifth Avenue, so that George’s letters can be read to her and answered for her.

Mrs. Van Buren is only too happy to be of help as her husband travels and is uninterested in her.  Christianna Nelson’s portrayal of a Southern Belle marrying a rich Northerner only to be disillusioned, is affecting.

Esther buys her beautiful fabrics from Mr. Marks, a Romanian Orthodox Jew, religiously observant, and attracted to her.  The scenes between these two are very moving.  Both are blocked – he with an arranged marriage waiting for him, and she losing hope daily that she will ever marry.  Their attraction is forbidden, yet it is palpable.

Tommy Schrider as Mr. Marks is superb in portraying his fidelity, love of the beautiful fabrics he deals in, and appreciation of Esther.

Nehassaiu deGannes is amazing as Esther.  While Esther has had little life experience with regard to men, she has learned much from her clients, including also her friend Mayme, a talented musician who has resorted to prostitution. The actress conveys the many layers to Esther’s desires, fears, and strengths.

The story of Esther and George is the core of the play.  But the bigger story is the mix of people from various places, of various races and classes in 1905 New York City.

Costumes by Molly Trainer convey the period and  people beautifully.  Having the same corsets for Mrs. Van Buren and Mayme (in different colors) a clever touch.

Set design was conceived to show the audience the various bedrooms where the story takes place.  Sandra Goldmark uses tapestries as background with one bed being moved and quilts changed.  While this slowed some of the momentum of the play, it felt right.

What went on in those bedrooms defied the norms, and noticing the differences highlighted the separations between the classes.

The projection device by Natalie Johnsonius Neubert was very effecting in introducing George from a far away place.

Scott Killian’s ragtime music set the tone throughout, and Mayme’s talent was highlighted in particular with her singing and piano playing.

When George arrives, we hope that Esther will have her dream materialize.  We realize that despite her hard life, she has reached out and risked everything to get married. As played by Lee Edward Colston II, George’s happiness and frustrations come to the fore. George has two sides, and his own dreams.

This nuanced play shows America in 1905, teeming with people from various places, who have suffered and struggled, but who still persist in following their dreams.

Isn’t that what America is all about?