El Coronel No at Repertorio Español 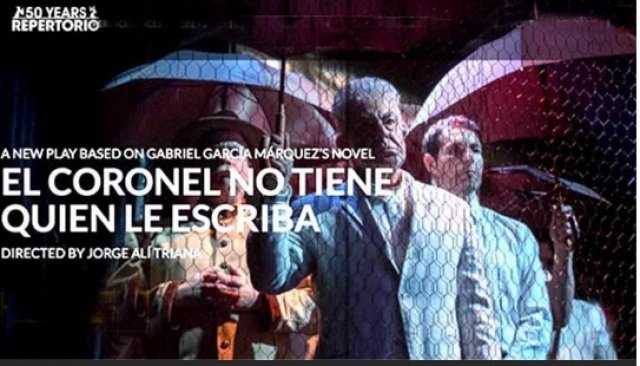 El Coronel No at Repertorio Español

Repertorio Español, the superb repertory company in Manhattan, is presenting El Coronel No based on a story by Gabriel García Márquez, adapted by Jorge Ali Triana and Veronica Triana. It is a Spanish version of Waiting for Godot.   It is also a delicious take on insanity – for forty years, the Colonel has expected a letter each Friday acknowledging his pension. For forty years it has not come.

The Colonel and his wife waltz with each other, although they are near to starving. Horatius, their rooster, sometimes joins them in the tender embrace of the Colonel. It is Horatius’ victory in the ring that seems a surer bet than the pension check.

Sabas, the local hood, played brilliantly by Mario Mattei, offers to buy the rooster and then backs off. He does provide enough money for the rooster’s corn. The couple sometimes eat some of his dinner for theirs.

The rooster is a fighting cock.  Horatius was owned by their son Augustin, shot and killed a year ago in the cock fighting ring. Presumably, that was  because this very cock kept winning, and big gambling money was not on him. Horatius is a talented actor in his own right. He crows before the show begins and takes appropriate bows.

Jorge Ali Triana directs to provide great variety in the repeated Friday expectations. He is fortunate in his talented actors. Germán Jaramillo as the Colonel and Zulema Clares as his wife. Luis Carlos de la Lombana is the doctor. He thinks at first that the wife will live a thousand years with asthma. Then he doesn’t know how she will last for another day. She does, because it will be Friday and hope springs eternal.

Jaramillo as the Colonel is a tall man. He does not stand erect, but he is neither stooped nor cowed. After forty years of waiting every Friday for a letter about his pension in the mail, he is still hopeful. At the start so are we.  By the end he continues an optimist, but we can see that this is because he has figured out how to endure without the check.

Clares as his wife has an urgency about her. She has an ever more debilitating asthma, which we first hear in quiet hacks. She is collapsing, but the dignity, good humor and persistence of her husband keeps her, if not going forward, at least waiting.

The doctor brings news of the Resistance in the mountains, preparing for the right moment to come down and remove the corrupt government, which is, among other flagrant transgressions, failing to take care of the Colonel’s pension.

The set, by Raul Abregn, fits the compact stage perfectly. Screen by screen opens, and closes. Actors are the stagehands. They are seamlessly comfortable in their dual roles. Lighting by Manuel Da Silva succeeds in making a small home warm, the rooster central, and the town goon particularly creepy.

We are in the rainy season, and correspondence with nature is clear in crackling thunder and frequent downpours. The Colonel notes that his old umbrella would be better for stargazing than protection from the rain. Humor abounds.

Yet the Colonel’s condition is not funny. All the waiting has taken its toll, but not on his indomitable spirit.

Marquez observed that he had written A Hundred Years of Solitude so that people would read El Coronel No tiene quien le escriba. This delightful adaptation represents the Nobel Prize-winning author perfectly.

We encourage you to try Repertorio Español.  Instant translations are available for the Spanish-impaired.