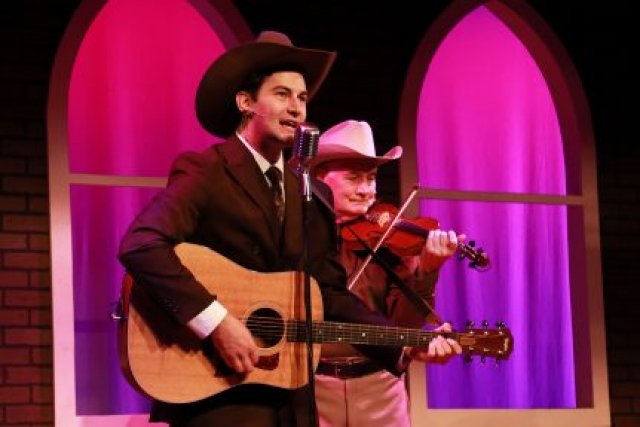 Photo by Alberto Romeu Hank Williams (Andy Christopher) plays and sings. In back of, and to the right of Williams, is H. Drew Perkins as Leon “Loudmouth.” 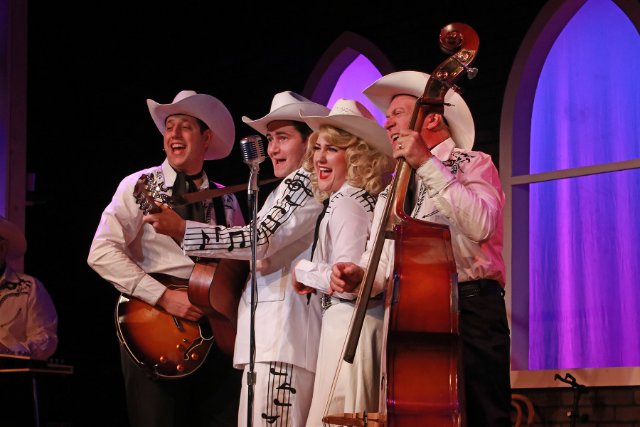 Photo by Alberto Romeu Cast members, including Andy Christopher in the title role, perform in a scene from Hank Williams: Lost Highway. 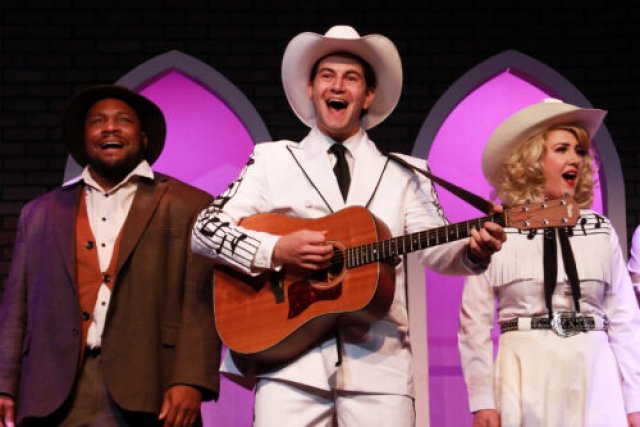 For much of the run of Actors’ Playhouse at the Miracle Theatre’s spirited and believable production of the stirring, poetic musical biography, Hank Williams: Lost Highway, I was visiting Nashville, Tenn. As you may know, the Music City is home to the Country Music Hall of Fame and Museum and Ryman Auditorium. Folks often dub the latter the “Church of Country Music.”

During my visit to Nashville, I attended a performance at the Grand Ole Opry. It is the world-famous home of country music and the stage for legends, superstars, and rising talent. Certainly, I experienced the warmth, humor, and vibrancy that undoubtedly make attending the Opry such a memorable experience.

Actors’ Playhouse’s terrific cast performs for us and addresses us as though we are live audience members at the Opry. Happily, I can say that the production, which ends on Sunday, made me feel as though I were still experiencing the Opry live.

The triple threat performers (singing, acting, and instrument playing) bring an impressive naturalness to their roles. Also, the performers imbue their characters with charisma, warmth, charm, and musical skill. While witnessing their work, you’d swear that they were seasoned Opry performers.

Certainly, director David Arisco deserves kudos for the seamlessness with which the production unfolds. But these multi-threat performers demonstrate talent that you just cannot teach. The performers wrap their expressive and versatile voices around almost 30 of Williams hits. Some are rousing, while others are quiet, reflective, and prayerful.

While the show sometimes feels like a concert at the Opry, it is rather a musical biography of Williams. Many regard him as one of the 20th century’s most significant and influential American singers and songwriters. In particular, during his all-too-short life (1923-1953), he recorded 55 singles that reached the top 10 of the Billboard Country & Western Best Sellers chart – including 12 that reached No. 1.

The show takes us on an emotional journey that serves up sorrow, joy, humor, and drama. Certainly, the play is transporting; it whisks us from our troubles and plants us in the often-upbeat world of Country music.

Wisely, though, the musical’s authors, Randal Myler and Mark Harelik, paint a balanced portrait of Williams and his world. Specifically, they never pretend that Williams’ life and career were carefree and perfect. Rather, the show’s authors depict with equal sensitivity the highs and lows that Williams and the people in his life experienced.

Of course, we watch as an elated Williams performs on country music’s biggest stage. But we also observe as those in charge fire him from the Opry due to his absences from shows, the result of his alcoholism. No doubt, we mourn, as the characters mourn, a life filled with promise tragically cut short by heart failure caused by the combination of alcohol, morphine, and chloral hydrate.

Hank Williams: Lost Highway is sort of a cross between a jukebox musical and a memory play with music. The show begins with the announcement of Williams’s death. Deftly, the cast strikes a mournful tone from the play’s beginning. During these somber moments, Chaz Rose, as Rufus “Tee Tot” Payne, soulfully sings the opening song.

Rose possesses a deep, rich, sometimes scratchy voice that brings reverence to the music. As the show begins, Williams’s ghost observes various reactions to news of his death. Then, in flashback, the play tells the story of Williams’s life, including his friendship with Payne, who taught Williams to play guitar. Also, the show touches on Williams’s courting and marriage to his first wife, Audrey; his rise to stardom; and his struggles with alcoholism.

The show’s authors have not haphazardly ordered the songs. Rather, their sequence in the show makes sense in the context of William’s story. For instance, the song “Mind Your Own Business” comes after the stubborn titular character, clearly annoyed, dismisses suggestions from the head of a music publishing company (a pleasant Barry Tarallo as Fred “Pap” Rose). Williams essentially tells Rose to mind his business; he (Williams) will do things his way, thank you very much. Also, appropriately, the title song, “Lost Highway,” comes toward the end of the show. By then, Williams is surely a lost soul.

At times, darkness covers part or much of the stage. Meanwhile, lighting designer Eric Nelson focuses his multi-hued lighting to illuminate the characters. The lighting reinforces an atmosphere of memory. In addition, hues such as red, blue, yellow, and purple merge to create a non-realistic effect. It also suggests memory.

On one side of the central playing space stands a realistic-looking front porch. On the other side is a diner filled with appropriate detail.

The space that rests at center stage is reminiscent of the Ryman Auditorium stage, the former home of the Grand Ole Opry. The show took place there during Williams’s life. Among the decorations are pyramid-shaped windows. Outside them, we notice colors that one might witness during a breathtaking sunrise or sunset. The hues resemble the kind you might encounter at the Grand Ole Opry. And it is fitting that the colors outside the windows resemble a sunrise or sunset; the cast members shine in this vibrant production and their voices are often sunny.

As Williams, Andy Christopher exudes a boyish charm with cheeks that you might wish to pinch when this dark-haired, dark-eyed performer smiles sunnily. Also, Christopher possesses an expressive, versatile, and strong singing voice that is as clear in the upper register as it is in the lower. Acting wise, Christopher is as effective at conveying Williams’s charm as he is at portraying the darker sides to the titular character’s personality, particularly stubbornness and impatience. Also, Christopher looks convincingly unsteady after his character drinks too much.

Christopher is hardly the only cast member who shines. In addition, Elizabeth Dimon is convincingly commanding as Williams’s stern, no-nonsense, somewhat over-bearing mother. However, in Dimon’s hands, “Mama Lilly,” as people call her, is never unlikable.

Also likable is Audrey Williams, Hank’s first wife. And Lindsey Corey imbues her with a sweet but never sugary personality. Apparently, Williams was blonde. Fortunately, Corey avoids the stereotype of the ditzy, scatterbrained blonde, although Williams was not exactly a Rhodes Scholar. And Corey does not play her as one. Rather, she lends her character dignity and an endearing exuberance.

In a supporting role, Sofia Porcel fares well as a waitress longing for connection. Porcel makes her likable. Therefore, it is easy to be happy for her when she meets and interacts with Williams.

Other actors play members of the Drifting Cowboys, Williams’s backing group. The performers portray them as loyal, supportive musicians dedicated to Williams. However, when his behavior turns undesirable, Williams tests the limits of their patience.

As an ensemble, the actors’ voices blend into a pleasing sounding whole. Individually, they believably lend their characters specific traits that differentiate one from another. Also, the performers, wearing costume designer Ellis Tillman’s appealing, creative period outfits, play their own instruments, and do so admirably.

Under Arisco’s direction, the pace is just right. Also, he highlights key moments in the play, ensuring that we do not miss them.

Before the reviewed performance began, Arisco told the audience that he had to “search the country” to find the actors. At least a couple of them are highly-respected and talented South Florida performers. Others hail from elsewhere and boast impressive credits. Wherever they are from, with their participation in Hank Williams: Lost Highway, the performers help Actors’ Playhouse maintain its standing as a musical theater-producing powerhouse in South Florida.

Hank Williams: Lost Highway runs through Sunday at Actors’ Playhouse at the Miracle Theatre. Remaining performances are at 8 p.m. Friday and Saturday, as well as 3 p.m. Sunday. For more information, or to buy tickets, go to https://www.actorsplayhouse.org or call (305) 444-9293.