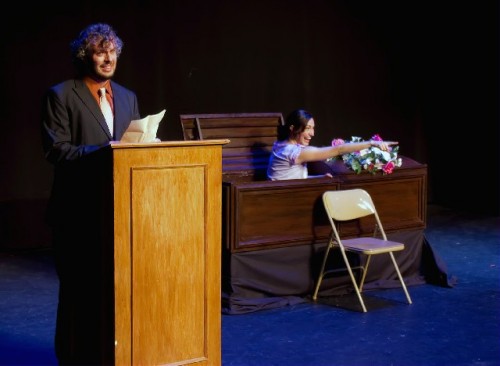 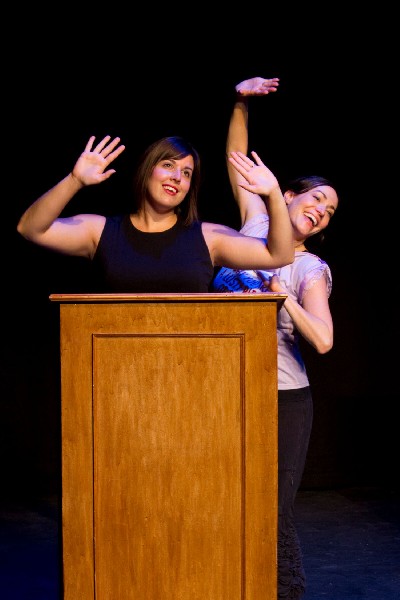 Mandy Mook bursts out for love and money. Severo applauds.

Thank You Notes is an arresting three-hander presented as part of the Midtown International Theater Festival.  Its surprise starts with the setting, an open casket in a funeral home, where a fraternal twin is conducting his sister’s funeral service.  A transparent bandaide delicately placed over the bullet hole on her forehead suggests the back story.  The brother reports an ‘accident.’   His sister rises from the dead to object.

This is a romp through letter after letter the now-dead Angela has left behind to direct her funeral.  A million dollars is at stake here.  Her dog Oliver’s ashes and a cardboard mockup of Jimmy Fallon, her true love, accompany her in the casket.  Barry Manilow, her parents favorite, echoes in what turns into an ominous, “Trying to Get the Feeling Again.”

A Tristam Shandy pre-birth note describing the twins life together in the womb begins the series.  Through baths together, trying to look alike, and on to teenage distractions by others.   Line after line is uproarious, suggesting a normal life headed for adulthood.  Neighbors, other family members, teachers and fellow students are portrayed in charming and often hilarious cameos.  Along the way, a love that can’t be spoken arises.

Why would the twin's brother follow the instructions when they are not just odd and quirky, but also downright subversive?   Her estate specifies that he gets the money if he follows them.  He doesn’t if he doesn’t.  His wife, sitting primly with the audience, is clearly going to make sure that the proceeding proceeds.  Nothing is going to keep her from the money, some of it specifically assigned to her.

Mandy Mook playing Betsy the wife has the smallest and yet the most difficult role.  While the twins live inside their heads, Betsy is real, sitting imperiously with us during the service.  When she bursts her propriety and enthusiastically projects “I’m singing to the world,” according to direction, her attractions become apparent. She comes to life, perhaps because the prospect of the inheritance is coming tantalizingly close.  She will not let Ethan back down, no matter what the consequences, which loom huge as taboos are uncovered from the grave.

Scott Cox plays Ethan who is charged with reading the notes.  Like crumbs leading to the witch’s house, we relish each tidbit.  Had they been directed more clearly to the heart-rending destination, Cox’s role might have been richer.  Yet in note after note, whether he is reading aloud or after he has passed off the letter to the post-life, miming portions Angela takes over from heaven, he is as touching as he is bewitched.  Their dialogue creating moments past is sharp and funny.

Vanessa Severo does a star turn as Angela, mixing fragility and strength in a physically comic take. Choosing to punctuate her phrases with a balletic pose from Julie Kent or an invented yoga dip, you can’t take your eyes off her.   Severo turns on a dime to give us many laugh aloud moments which build to the tragic and provocative conclusion.  Her over-the-topness may have caused her twin to abandon her, and that quality is clear as Severo spins and twirls through heaven.

Thank You Notes is a bizarre, moving and entertaining twist on A.R..Gurney’s Love Letters, and may be picked up by actors who like working together to attract audiences.  This production of Thank You Notes by the mega-talented Vicky Vodrey does just this.