Footloose the Musical in Fremont. California 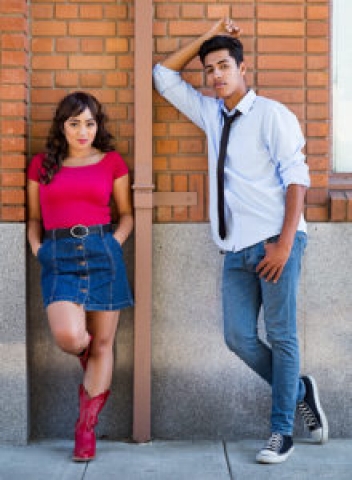 For those familiar with '80s pop culture, the set up is well known.  A boy going into his senior year of high school is uprooted from the diverse and stimulating environment of Chicago into a cornfields town almost devoid of entertainment.  What's worse is that because of a tragic car accident that killed four teens several years earlier, the town has banned dancing.  The city boy's challenge is to overcome the resistance of an influential reverend in order to put on a senior party and bring dance back.

In "Footloose the Musical," Starstruck Youth Performing Arts has selected a perfect vehicle for a large teen cast. Teen performers playing age appropriate parts are certainly in their element, and they convey the bright side of being teens with authenticity. They perform commendably within the expectations of community theater and their limited experience.  The kids do get an assist from adult designers and musicians, but they have to have the charm and competence to make it work.  In all, they create a fun evening, full of enthusiasm.

As Ren, James Misa plays the lead.  His charisma is key to engaging the audience, and his physical presence through dance and informal movement sustain the pace.  Ally Abonador is his love interest, Ariel, and she shines in vocals, especial when she can blast, as in "I Need a Hero."  David Kautz as Willard provides some good comic turns, and in a smaller role, Simi Sen is convincing as Ren's mother.  Other players, many taking on characters of their parents and grandparents ages, turn in worthy efforts as well.

The production demands a great deal of prop and people movement, and Director Lori Stokes orchestrates the elements well.  The staging is diverse through frequent venue shifts,  and the many costumes and changes create a colorful visual effect.  Lillian Katz's flood-the-stage choreography creates much of the energy of the show, with fine music direction by Nancy Godfrey. But the smiling, rollicking kids bring it to life with hips twisting and limbs flailing.  Lighting and sound combine to good effect.  And of course the music is what keeps coming back to our minds - the irrepressible anthem "Footloose," "Almost Paradise," and "Let's Hear it for the Boy," as starters.

"Footloose the Musical" is based on a film that was part of a strong cluster of movies that in some ways was a gentle echo of the youthful rebellion of the '60s.  Hollywood struck a rich vein of teen and young adult musical films in the decade starting 1978.  Some were based on earlier stage musicals, and others would later become live theater pieces.  "Grease, "Hair," "Fame," "Flashdance," "Footloose," and "Dirty Dancing," in that chronology, all garnered great attention.  "Footloose" contains all the dominant themes of the cluster - coming of age, achievement, relationships, and challenging adult conventions and controls.

Each musical tell stories of winsome, mostly middle class kids, with an abundance of upbeat rock music and dance.  They succeed because they appeal to many adults in addition to the teens and young adults who are the subjects of the film.  The music and dance appeal to war babies and baby boomers, because they were the first teens to have greater independence and were the first to protest en masse against the old ways.  And in the case of most, these adults largely identify with the younger generation and cheer them on.

Of this cohort of movies, "Footloose," and its subsequent musical, is the only one that concerns religion.  It also considers a distinction that in some ways the protests of the '60s failed to, at least in a public way - that being the possible divide between rejecting the values of the older generation versus rejecting individuals of that generation.  Ren's antagonist, Reverend Moore, is also Ariel's father.  In her becoming a young woman of independent thought, she is forced to confront this matter head on.  In effect, her consternation exemplifies an extra dimension that adds some meaning to what might otherwise be a somewhat trivial storyline.

"Footloose the Musical" with stage adaptation by Dean Pitchford and Walter Bobbie, is produced by Starstruck Youth Performing Arts, and plays at the Smith Center, Ohlone College, 43600 Mission Blvd, Fremont, CA through August 13, 2017.

Reposted courtesy of Victor Cordell and For All Events,