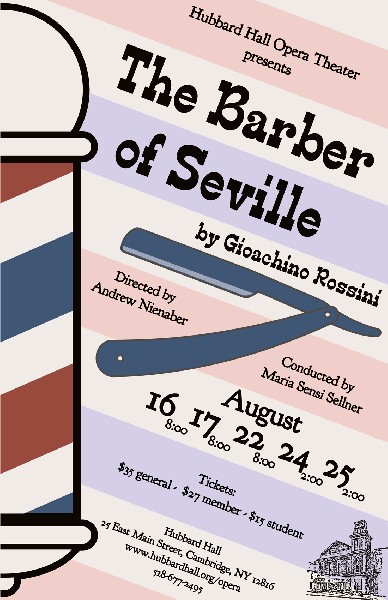 In its sixth summer season, Hubbard Hall Opera Theater (HHOT) presents Giacomo Rossini’s classic comic opera, Barber of Seville, directed by Andrew Nienaber.  Nienaber has just come from a highly acclaimed Barberat Piedmont Opera, where Peter Perret of the Winston-Salem Journal had this to say: Rarely have I laughed as much or as hard at the theater [and] much of the humor is no doubt due to the stage direction of Andrew Nienaber…This is a “must see” production!

HHOT begins this summer’s farce in the sultry town of New Orleans, a location as exotic to New Yorkers as perhaps Seville was to Madridians.  Barber by day, matchmaker by night, Figaro puts his wiles to work as he aids the Count in wooing the beautiful young Rosina. She's such a catch (and a wealthy one too) that her guardian, Dr. Bartolo, keeps her under lock and key with the intent of marrying her himself.  But no challenge is too great for Figaro's trickery and, with laughter at every turn, the cunning Rosina has no trouble manipulating things herself!  Together, they give the doctor and the oily music master Don Basilio a run for their money.

New Jersey baritone Patrick McNally will sing the title role in Barber of Seville with HHOT this summer. Winner of the Shoshana Foundation Award, McNally recently made his international debut with the Neue Eutiner Festspiele.  Joining him on stage as the Count is tenor Luke Grooms, who is on the roster of the Metropolitan Opera, and who the New York Times has compared to Pavarotti in all his glory. Equally at home with modern works, Grooms recently was nominated for an Elliot Norton Award for his performance of God in Jerry Springer: The Opera, with Speakeasy Stage Company which played at Carnegie Hall.  The Boston Theater Examiner swears his lovely tenor could melt butter, and “if he can do this for 3,000 seat audiences, you better believe he can do it at the Hall,” says Artistic Director Alexina Jones.

Also appearing with HHOT this summer is the well-respected veteran singer Ryan Allen, who will be performing his centennial Basilio.  The bass has sung in all fifty states and appeared with many opera companies, including the Metropolitan Opera, where he debuted with Hans Foltz in Richard Wagner’s Die Meistersinger von Nürnberg.  He has also appeared at Carnegie Hall in the Mozart Requiem and sung as soloist in Russia, Finland, Norway, Poland and Israel.

Andrew Adelsberger, a comedic stage genius hailing from the Maryland Opera Studio, will play the overbearing Dr. Bartolo.  And finally, up-and-coming mezzo-soprano Abigail Levis, a recent graduate of the Bard College Conservatory, will take on her first Rosina.  Levis was recently named “Debut Artist of the Year” by the Joy of Singing Foundation and has been hailed by critics as possessing a “lithe-voice” (New York Times), wonderful “dramatic style [and] high level of technical ability” (Boston musical Intelligencer).

“We are so excited to have this level of talent grace our stage this year,” Jones continues. “For our shows, the Hall seats 130 people max.  Last year we had to turn people away.  So buy your tickets early.”

In addition this season, HHOT will be presenting Gilbert and Sullivan’s Trial by Jury, directed by Paul Sigrist, on Aug. 17 and 18 at 2 pm and Aug. 23 and 24 at 8pm.  Tickets are $15 suggested donation or pay what you will at the door.  This piano production, sponsored by The Vermont Country Store, the Golub Foundation, and several other local businesses, provides additional training opportunities and allows our talented cover artists a chance to shine.

Angelina, jilted by her lover Edwin, has taken him to court for breach of promise.  The jury has been coached by the Court to side with her, in order to be "fair and impartial."  Edwin, the defendant, offers every legal argument he can, including an offer to marry both Angelina and his new lover.  The judge, who has reached his high office by marrying a rich attorney's daughter, doesn't know the difference between "bigamy" and "burglaree” but none of that matters once he lays eyes on the beautiful bridesmaids parading through his court.

Director Sigrist has strong ties to the Capital District and is a jack-of-all trades in the theater world.  He is a talented and sought-after performer from film and television (Saturday Night Live) to opera (Gilbert and Sullivan Players, NYC) and he translates that talent and experience into exceptional teaching and directing skills.  Sigrist has directed and costumed numerous productions with the Saratoga Opera Summer Intensive and will be working to make this summer’s Trial by Jury a show not to be missed.  Further information about the cast can be found at http://www.hubbardhall.org/opera

Other events of interest include a Barber of Seville lecture and listening event led by Music from Salem with a sampling of HHOT singers on Saturday, July 28 at 2pm on the Hubbard Hall mainstage. Tickets, at $10 each, are available at the door.  On Aug. 3 and Aug. 9, the HHOT singers will present a concert of selections from Barber of Seville at the Clark Museum in Williamstown and the Saratoga Library in Saratoga Springs, respectively.  Wednesday, Aug. 14, marks the final dress rehearsal for Barber of Seville at 8pm. This is an open event, where audiences may make a donation at the door, but for those interested in a more in-depth look into the world of Rossini, HHOT is hosting a preshow talk at 5 p.m. and dinner at 6 p.m. The all-inclusive price for this homegrown taste sensation is $35. Call for reservations, 518-677-2495.

Founded in 2008 by Jones, HHOT has since presented six critically acclaimed summer productions with orchestra.  Last summer’s Magic Flute earned a nod from James Atlas of the New York Times: I’ve see Mozart’s joyous opera many times, and this was the best by far. It was an exhilarating event. You couldn’t monetize it, you couldn’t commodify it, you could only experience it.

This winter, HHOT brought an orchestra production of Verdi’s La Traviata to Proctors where it was performed in the GE Theater in front of the 50-ft hi-definition screen that projected the backdrops.  HHOT also specializes in condensed touring piano productions for small venues, schools and festivals.  This past season HHOT toured with Mozart’s Abduction from the Seraglio and Puccini’s La Bohème.  Be on the lookout for Carmen next year.

HHOT provides classically trained singers and instrumentalists in New England and upstate New York greater opportunities to create something beautiful close to home, while also giving rural audiences the chance to enjoy an opera without having to spend the night in a city to do so.  HHOT is dedicated to providing young artists with the chance to perform key roles in a nurturing environment alongside experienced field professionals.

Hubbard Hall is an historic opera house located at 25 E. Main St. in Cambridge, NY. You can’t get here without driving on beautiful country roads! For information, visit www.hubbardhall.org