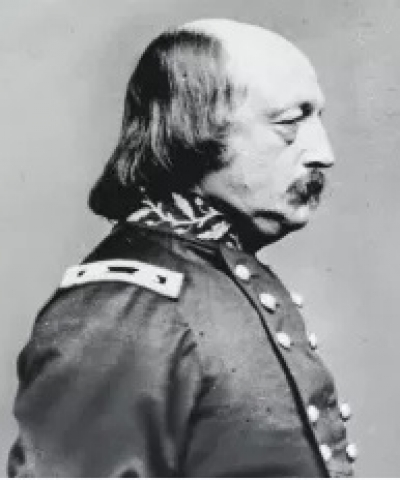 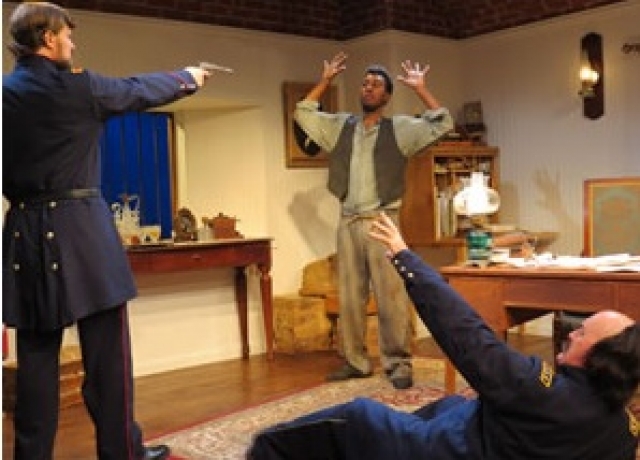 Benjamin Sterling comes to the rescue of Ames Adamson, as the General. John G. Williams has just struck him. Or perhaps the General just fell. 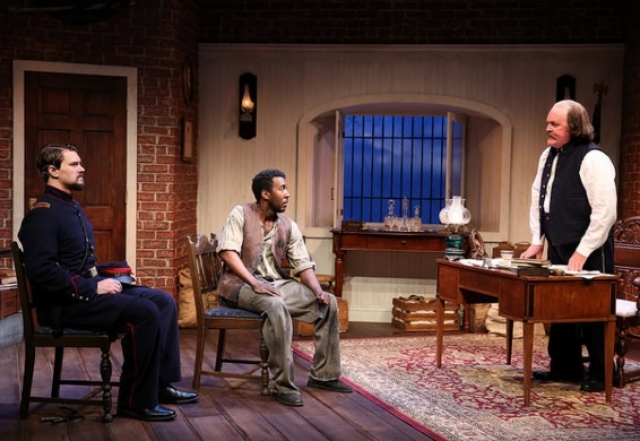 A conference about contraband. 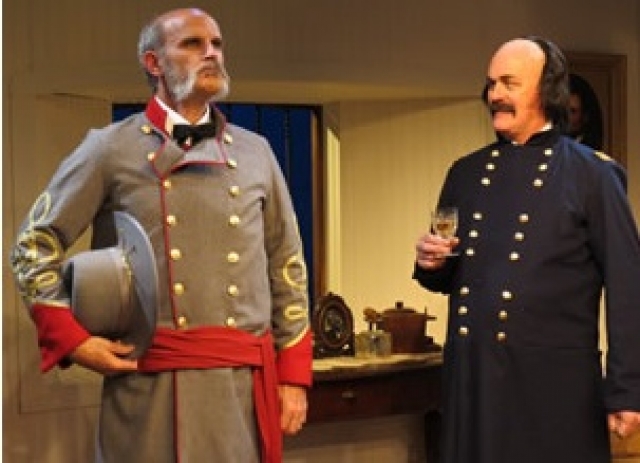 Major Cary tries to keep his cool as the General twists around him.

When war and comedy are joined as subjects, the result is often dark. Not so the delightful play based on real Civil War events at Fort Monroe, a launching pad for emancipation.  Butler goes to the dark heart of these matters, but the result is an exuberant celebration of language and the capacity of one man to look into the essence of another.

Playwright Richard Strand has taken history and woven a warm, rollicking tale of two unlikely men very much like each other, Major General Benjamin Franklin Butler and a runaway slave Shepard Mallory. They are vehement, which brings out an uneasiness that can amount to admiration.

As directed with brisk pacing and insight by Joseph Discher, a trio plays to and fro with each other. Slave Shepard Mallory is drawn as much a a troublemaker as General Butler. They spar with each other, matching wit for wit. There is a lovely play on ‘all black people are alike.'  Mallory makes the argument that he is in fact different from most black people. The person that he’s most like in the world is the white General. Butler agrees. His adjutant Lieutenant Kelly comes around to an appreciation of Mallory, although this shift in feeling takes place offstage.

Lest we forget that slaves were not allowed to learn to read, Charles Burnett’s film Nightjohn serves as a wrenching reminder. Like John in that film, strap marks cover Shepard’s back.  Apparently using his mind was a cause for anger (and fear).

General Ben, the name Butler suggests Shepard use, is open to all ideas, some of them criminal, others at the upper reaches of morality. A lawyer by trade before he entered the Union Army just months earlier, Butler can manipulate words until they mean nothing. He also has an open heart, and when he can effectively use information provided by the slave, he quickly gloms onto it.  As the play progresses it puts the slave’s insights into effective action.

We laugh at the sophisticated vocabulary and subtle insights of the slave. We are moved by the open-heart of the General. Both men have sharp minds and focus they use to get what they want in whatever way they have to.

How closely Butler is listening to his prisoner is evident when David Sitler, playing a representative of Shepard’s owner, stumbles blindfolded into the General’s office. He grumpily accepts his humiliation as the trio surround and down him.  It is Shepard who suggested that Cary is coming not to take back Colonel Mallory's property, but rather to survey the artillery at the Fort.  Butler has listened carefully to the slave.

Butler’s appropriation of the term 'contraband’ is the turning point of the play, and is rooted firmly in history. If slaves are contraband they can be seized by the Union Army. Walking contraband can walk into the Fort, and once the idea spreads through the slave community, many ‘contrabands’ come to Fort Monroe. The dynamic duo of Butler and Shepard has launched emancipation, however black their hearts may be in some corners.

Ames Adamson is coiffed and combed like the General, and offers a picture of a complex man. Benjamin Sterling as Lieutenant Kelly is at first very West Point, but loosens up as he watches the General respond to immediate circumstances.

John Williams as the slave is slim and seemingly insubstantial at first glance, but the acuity of his mind, pleasure in language and ability to plumb character are cagily revealed in this superb performance.

The reason for Fort Monroe’s position in the history of emancipation is suggested. We are struck by the idea that the difference between two humans is not determined by the color of their skin, but rather by the cut of their jib.

Butler is an enormously entertaining take on crucial issues of American history.