Must See Theatre at S&Co. 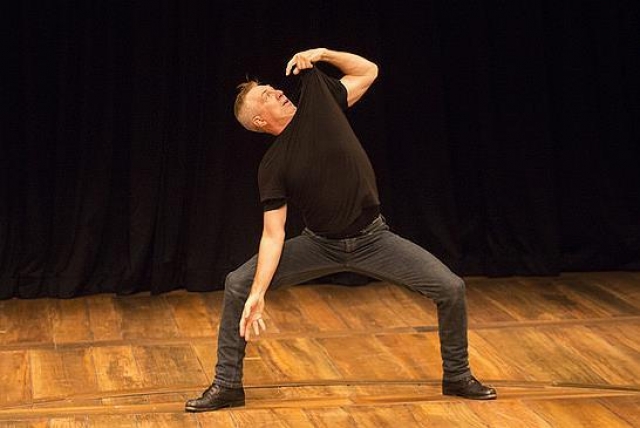 In a 75 minute solo performance by Stephan Wolfert Cry “Havoc” there is a compelling, frenetic telling of his own difficult, challenging and complex life. There are harrowing insights of the process and aftermath of being trained to kill in defense of the nation.

The performance has an emphsis on stacatto delivery, extreme facial expressions,  lines punctuated with body language, and even passages of the 49-year-old actor simulating the grueling demands of basic training with occasional accents of classical ballet.

Through a scathing indictment he conveys in detail how recruits are indoctrinated  to loose individuality evolving into a band of brothers. He noted the meaning of uniforms as surrogates for uniformity. Every soldier is dressed precisely alike down to the orientation of shoe laces.

From basic training to combat drills, then elite units like the Navy Seals and Green Berets, there is the focus on eliminating threats. The person killed is not a son, daughter, brother or sister but rather an enemy combatant.

While the military is successful in forming effective combat forces, as he details in chillingly sharp focus, there is not a deliberate attempt to reverse the process and deliver combat hardened veterans back into the mainstream of society.

From Iraq and Afghanistan troops return to civilian life after a tour of duty. They may be redeployed as many as six times. The majority of these troops suffer PTSD  most typically through chronic nightmares. Too often that results in failed marriages, alcohol and drug abuse, homelessness, and high rates of suicide.

Wolfert’s trajectory conveys a teenager from a broken home, without the resources to follow his dream of a life in the arts and higher education, to a damaged adult suffering chronic PTSD.

The emotional peak of a magnificently performed evening of edge-of-your seat theatre came when he almost snapped or slipped into berserk mode.

He was a catering waiter at a kid’s Disney-themed birthday party. On the ground he was picking up discarded food. A child approached him and threw a cupcake in his face. For a moment, in  reversion to a perceived threat, he almost retaliated with deadly force.

While terrible to convey to an audience it was a measure of how killer instinct is programmed. Wolfert returned home and placed a sawed-off shotgun under his chin. This was conveyed with the “To be or not to be” soliloquy from Hamlet.

In an aside he conveyed the frequency with which veterans take their own life, and on occasion, those of others. During the time frame of the performance a veteran somewhere in America committed suicide.

During a talk back which the company promoted as “Act Two” an audience member related how a loved one had killed himself on the Fourth of July.

With its “bombs bursting in air” the holiday is a terrible day for combat veterans.

There is a lot about this performance that is tough to take. Told from a veteran’s point of view there is little glory in war. There was a recited litany of what it will not help or cure.

The neglect of veterans by the government, including scandals at VA hospitals, is a national disgrace. Following Vietnam troops returning home received a chilly reception by a nation that rallied against the conflict.

He offered a different and unpopular version of what happened during the My Lai Massacre. In his telling the platoon had taken fire one too many times when passing the village. The order from Lieutenant William H. Calley, Jr. was the medieval Cry Havoc and the soldiers went berserk.

Every man, woman and child in the village was slaughtered that day.

Wolfert with grim emphasis detailed how similar incidents have occurred through history and continue to the present day.

In medieval war Cry Havoc was a command for troops to pillage and rape without mercy. You may recall such a scene from the film Lawrence of Arabia.

The word berserk derived from Viking warriors in battle frenzy. They wore bearskin robes as a form of armor. In the height of battle they threw them off. The word derives from Norse for bear.

Wolfert, citing Shakespeare, described how at the beginning of Macbeth he had gone berserk in battle and was accordingly elevated to Thane of Cordor.

There is a lot of Shakespeare woven into this monologue. In developing the performance he has gleaned battle scenes and characters from Richard III (the first play he saw that inspired him to graduate school in theatre), Hamlet, Macbeth and Coriolanus.

As the result of a high school wrestling accident he suffered spinal paralysis from which he eventually recovered.

Seeing the bent and deformed Richard III there was an immediate and visceral response. “Now is the winter of our discontent” took on specific personal meaning. From then on he devoured Shakespeare.

These vignettes were so richly acted that one longs to see Wolfert returning to S&Co. in one of those roles.

As we discovered during the talk back, people like Wolfert, with similar experiences and nightmares, are a part of our community. He asked those in the audience to identify themselves as veterans, their rank and assignment.  A woman informed us that she had been a nurse during the Tet Offensive. Another had just buried her father at Arlington National Cemetery honoring his final wish. He had been a prisoner in Germany during WWII.

The most riveting anecdote of the performance entailed an African American soldier from Abany, Sgt. Henry Johnson, who served in WWI. During a night raid in No Man’s Land as forward scouts he and a partner were attacked by a squad of 23 soldiers. Suffering multiple wounds Johnson went berserk and killed many of the enemy then dragged his wounded partner back to safety.

As an African American his heroism was not recognized. He returned home and died of alcoholism and destitution in his 30’s. Recently, he was posthumously awarded the Congressional Medal of Honor. Fighting with French troops in a then segregated army he was, at the time, awarded the highest honor from the French government. Back home the response was thanks but no thanks.

The performance is entirely derived fromWolfert's life experience including outing an alcoholic father, cold and apathetic mother, and a brutal older brother.

Using Tennessee Williams and Eugene O’Neill as examples of playwrights who drew upon their families in tragic dramas, with terrible consequences for their personal lives, I asked Wolfert how that played out for him?

The response was that his performances are cathartic and liberating. He is a part of a veterans group that meets once a week to perform scenes from Shakespeare as therapy and a healing process.

He described being a mess all day prior to a performance. Walking around New York he is buttoned up but then lets it all hang out on stage.

With a charming, somewhat maniacal smile, he described how after a performance he feels really good. But he apologized for laying all that shit on us. Act Two represents a chance for closure between himself and the audience.

On every level Wolfert stirred the pot. It provoked a lively dialogue on the ride home. Significantly, many in the audience commented that they were returning having seen the performance when Wolfert was presented briefly last year.

This is a performance that many will want to see more than once. There is particular significance for veterans and their families.  It has been suggested that Cry “Havoc” may become an annual part of S&Co. programming.

Looking around at a half-filled theatre on opening night it is obviously a tough sell. This is a show that depends on word of mouth. It is an experience that you are likely never to forget.