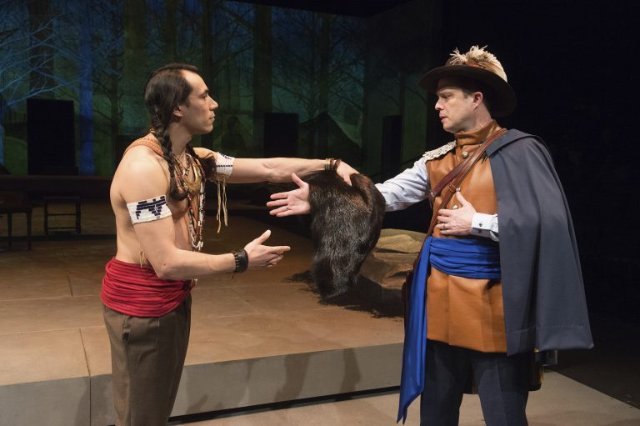 Steven Flores as Se-ket-tu-may-qua and Danforth Comins as Jacob trade fur for wampum.

Most of us were taught something in school of how Peter Minuit, representative of the Netherlands via the Dutch West India Company, purchased the island of Manhattan for about $24 worth of trinkets in 1626. Additional details are less well known. The tribe that occupied the island were the Lenape people, and the name of the island comes from the Lenape word manahahtaan, roughly meaning “place where we gather wood for bows.”

In Manahatta, playwright Mary Kathryn Nagle has written an illuminating, provocative, disquieting, and totally entertaining play that depicts the early days of the white man’s arrival on Manhattan in concert with high finance and Lanape life in the 21st century. What may come as no surprise in this pairing is how history repeats itself and in particular, how greed motivates and destroys victims and sometimes perpetrators as well. What she also suggests is that the victors write, and whitewash, history for the glorification of the entrenched. In not seeking and revealing the truth, we fail to know ourselves and learn from our mistakes.

Although Native American populations were generally cautious about the intruders from Europe, they were usually trusting and even generous to the point of keeping foreigners from starvation. Perhaps the first thing to note about the transaction that initiated permanent white settlement on Manhattan is that while the Dutch characterized their agreement with the Lenape as a purchase, the Lenape had no concept of owning land. From their perspective, they were granting the Dutch a gift to live and to share in the bounty from the land that the natives occupied in exchange for wampum.

The compelling contemporary story is of Jane Snake, a Lanape from Oklahoma, who becomes a high profile investment banker at Lehman Brothers Bank. As she toils her way to a highly visible position, she begins to connect with her people’s history in Manhattan, but at the same time suffers discrimination at work, and sacrifice and conflict with family back home.

The two stories roll out interspersed, with most actors playing parallel characters in both eras. Time shifts frequently and sometimes so rapidly that actors make costume changes as they enter or exit the stage, or switch roles with a mere change of posture. The forced pace of the turnover adds urgency to the proceedings, which particularly suits the volatile investment banking scenarios.

Common threads bind the two narratives. Minuit and real-life Lehmann CEO Dick Fuld represent the entrenched and powerful of their times. In each case, a sense of omniscience leads to bad decisions that result in destruction. In both eras, financial disaster results from delusion and greed centered on financial derivatives – the Tulip Bulb Mania of the 17th century and the collateralized debt obligations of packaged mortgages in 2008. Another commonality is the dispossession of the already disadvantaged in society. Whatever failures by those in control redound even more painfully on others. And an ominous and timely echo is that of the physical Wall Street in Manhattan (as opposed to the name of the financial district). Most people probably intuit its history, but the play vividly presents the purpose of the wall as designed to keep the “savages” out. The prospect of a parallel scar today is foreboding.

These stories are told using deftly drawn characters. The soulless, aggrandizing nature of the rich leaders contrasts with the traditional values of the Lenape. Jane tries to walk in both worlds and represents hope. Her mother, Bobbie, while sometimes intransigent, is yet an empathetic character. Her personal courage and dignity are tested when saddled with a burden that would only occur in the United States – back breaking debt resulting from medical care.

Director Laurie Woolery fully realizes the playwright’s brilliant text with a simple staging that let the action and the words do the talking.

As a final note, it is instructive to return to the “sale” of Manhattan for trinkets.  It is reasonable to conclude that our school books’ misrepresentation of the nature of the transaction, together with the association of the vast value of today’s Manhattan, conveys a racist message about the foolishness of Native Americans. Why is it that of all of the seizures of land by colonists that our society feels it necessary to highlight this one?

Manahatta by Mary Kathryn Nagle is a world premiere produced by Oregon Shakespeare Festival and plays at its Thomas Theatre in Ashland, Oregon through October 27, 2018.