The Petrified Forest By Robert Sherwood 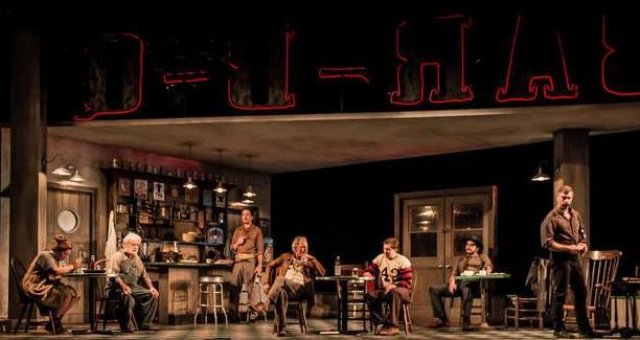 The meticulously detailed set by Wilson Chin faces us at an angle. The focus is on our left with the bar and behind it seen through a serving window is the kitchen.  That's where Paula (Lauren Baez) slings the grub. There is a cluster of tables with one at the side where the thirsty Gramp Maple (John Thomas Walter) presides begging for whiskey and reciting senile tales to anyone who will listen.

He still owns this roadside, last ditch café and filling station. It's in the middle of nowhereseville near the Petrified Forest in the arid, slightly populated desert of Arizona.

We examine vintage details including period posters and furnishings. The setting is drab on drab. That is also an aspect of the generic schmattas designed by Hunter Kaczorowki. A leading lady has rarely been dressed in a less attractive manner. No sensual young body is evident beneath the shapeless rag that drapes limply over her. But that, arguably, is appropriate to the era and her squalid social status. The “rich” lady fares just an increment better.

Generations before the influx of snowbirds Arizona was the Siberia of America.

Behind the counter Sean Cullen (Jason Maple) runs the business putting nickels and dimes in the till. He would like to convince Grandpa to sell the joint so he can start over in LA. His daughter Gabby (Rebecca Brooksher) is a desert flower in full bloom but fading fast clinging to youthful hopes and dreams.

There is tension between father and daughter. He would like to be more of a hero to her. While he served in WWII it was as a truck driver. Now he clings to that time in The Big One. He dresses up in his Legionnaire’s outfit, with a pistol on his hip (a plot point), for weekly boys’ nights out.

She reads poetry a gift from her mother in France. A war bride, she abandoned a grim life with a dull husband to return home. Gabby dreams of visiting her and developing autodidact skills as an artist. Oh to dance the night away in a Left Bank café.

The play was written by Robert E. Sherwood in 1935 during the rock bottom of the Great Depression. It was a time when young people like Gabby, and the ersatz football all star who peruses her, (Shawn Fagan) Boze Hertzlinger, share dreams with no hope and few prospects.

If fate runs its course they will be stuck in the desert with a brood to feed. Her beauty will fade sliding into menopausal oblivion. While essentially a realist, perhaps sparsely social realist drama, this last ditch café could have been Sartre’s “No Exit.”

But Sherwood is no philosopher or social commentator. He does, however, capture the zeitgeist with insight, panache and poetic flair. The oppressive factors of America during the Depression years are sketched out if not elaborated.

Like the limited menu of the café we get a taste of the flavors of an era but less than a satisfying meal.

There are characters with potential drained by circumstances and those forced to take desperate actions.

Like tumbleweed, a drifter David Adkins (Alan Squier), in yet another brilliant performance for BTG, blows through. With a touch of the poet and ambient charm he cons a meal. A self described, penniless hobo he adds “gigolo” to his resume. That intrigues Gaby as they share a commonality in romance and poetry.

His elegant style and arguably British accent (originally written for Leslie Howard) evoke style, class and education brought low by the enigma of national financial collapse. A failed artist and con man he has one last move to make a creative statement. It’s an absurd and hardly credible scheme for what, today, would be called “death by cop.”

In this case a robber. The sullen, brutal, stone cold killer, Duke Mantee (Jeremy Davidson), with his gang is on the lam. With rifles they bust in and terrorize the occupants. He plays his hand tight but evokes control and primitive cunning. Ultimately, this tough guy, a take charge existentialist is sold out by the dame who is supposed to rendezvous with him.

During the Depression era bank robbers were popular folk heroes. Woody Guthrie celebrated “Pretty Boy Floyd” as a Robin Hood in a 1939 song. Gangsters were romanticized in movies. We learn that Duke has just staged a massacre so what does that make him? Is there anything admirable about the character? Or is he just a thug? That’s up to the director and here the bottom line is muddled and mixed.

The tough guy Duke has been duked by a frail. While the gang urges “We gottah go boss” he’s waiting on the skirt. Ain’t it always about a dame?

Consider the hoitsy toitsy, high society lady Mrs. Chisholm (Jennifer Van Dyck). She and her rich stiff husband (Walter Hudson) are rolling through bound for the coast in a hand crafted Dusenburg. Catching the drift and excited by sanguine testosterone, with hilarious surprise, she makes a move on Duke. Compared to her wimp of a husband Duke is a “real man.”

Sherwood explores many aspects of manhood. Is a desperado, fated to end life in a hail of bullets or a date with the hot seat, the paradigm of gender? Consider Duke as the Alpha Male. With that benchmark we are set up to rank and evaluate the other men. Clearly the lowest of the low is the rich guy. That’s straight out of the Depression era playbook.

What to make of Alan Squier? Does his absurdist, desperate action flip him from looser to winner? In a hard role to sell,  it’s tough to be definitive about how Adkins plays him as directed by David Auburn.

It’s a stretch that, like Sidney Carton, he seeks a far better life sacrificing himself on a whim for a young woman he just met. There is a fleeting script marker to “Tale of Two Cities.” Sherwood was no Dickens.

Cut down from an original 21 Auburn manages 13 actors in 14 roles. That’s an unwieldy number of characters to keep moving. It results in cameos and vignettes that don’t necessarily advance the story line. Some have greater potential but have been blown off by the director.

Early on, Gaby serves the “daily special,” a permanent feature of the menu, to two workers. They repair telegraph lines. Grandpa chimes in that he was a poleman when the line was first strung.

An emerging actor, the evocative Tre Alexander Dukes, mouths off about Russia and Marxism. This is a hint of the socialism of American workers during the 1930s. That the character is black and vocal is all the more remarkable. It puts him at serious risk of lynching.

Consider that Sherwood’s play debuted on Broadway in the same year as the strident “Waiting for Lefty” by socialist Clifford Odets. When the two workers pay up and leave Auburn lets politics slide. There could be much more emphasis and precision about issues of class, gender and race.

With exposition and subplots the pace of the first act was slow. There were numerous references that Duke’s murderous gang was approaching the area. They finally barged in just before the curtain.

Action, fight scenes, and an explosive shoot out ratcheted up the second act. It quickened the pulse of the audience with amusing intervals like the antics of the scene stealing Mrs. Chisholm.

The play came to a slamming, hold onto your seats, crashing climax. It equated to an entertaining, richly satisfying evening.

So much so that I forgot to mention that Humphrey Bogart starred in the 1936 movie. A big hit for Bogie, in hindsight, it was a lesser role.