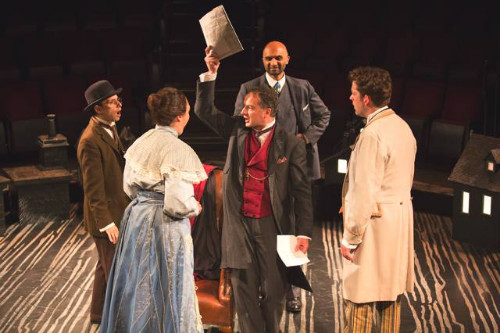 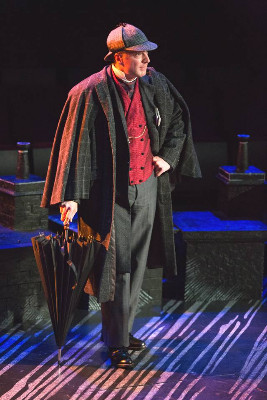 Although he winces when people refer to his comedy plays as “farces”, there is no doubt that he is one of America’s finest practitioners of the genre.  Most famous for his Tony Award-winning comedy/farce plays “Lend Me a Tenor” and “Moon Over Buffalo”, prolific playwright Ken Ludwig, once again scores with his latest inventive and zany comedy “Baskerville: A Sherlock Holmes Mystery.”

Let it be known that when a playwright takes on the chore of adapting a story as famous as “The Hound of the Baskervilles” from the pen of Sir Arthur Conan Doyle and the creator of Sherlock Holmes, one of English literature’s most iconic detectives – Hercule Poirot created by Dame Agatha Christie, being the other – it’s a given that special care and handling has be observed.

The task of insuring fidelity to the original story, yet helm Ludwig’s adaptation,  falls to director Josh Rhodes who is more than equal to the challenge. Rhodes has a firm creative grasp of his material and the inventive skills to stage a warp-speed mystery/comedy with an absolutely inspired cast of five talented actor/farceurs.

The Old Globe’s Sheryl and Harvey White Stage is where the dastardly deeds take place and to quote the idiosyncratic Holmes, “patience Watson, all will be revealed” is the watchword for the evening’s hilarity.

The story is set near the turn of the 20th century on the moors of Devonshire, England, where the famed detective played by Euan Morton along with his trusted companion Dr. John Watson played by Usman Ally, have been commissioned to investigate the mysterious murder of Sir Charles Baskerville, one of a long line of Baskervilles that allegedly have died as a result of a long standing family curse.

To assist in the telling of the heavily plotted and well known tale, director Rhodes has the good fortune, in addition to Morton as Homes and Ally as Watson, of having three gifted actors: one woman (Liz Wisan) and two men (Blake Segal) as Man One and (Andrew Kolber) as Man Two – play over 45 parts in all.  The energy, character, costume, and voice changes; all performed in a series of on-stage moments requiring split-second precision and timing is thing of beauty to behold.   It’s a visually a stunning accomplishment reminiscent of the play “The 39 Steps” which also takes place in England where four actors play almost 50 roles (It must be all that tea they drink in England that give their actors all that energy).

The enjoyment of this stellar ensemble cast and production, however, is in the details of their performances. Also the many clever, comedic, and innovative directorial touches in this highly entertaining production is due to the personal vision brought by director Rhodes.  It’s a slam-dunk winning production.

The technical credits at the Globe are always first rate, and this production is no exception. The creative team led by director Rhodes includes: Scenic Designer Wilson Chin who provides a most unique set and space for the actors to perform their magic.  Who would have thought of having the actors work with on stage miniatures as a way of telling the story as well as allowing the actors to become inter-active with the audience?

Lighting Designer Austin R. Smith provides the right amount of mood-lighting for the mystery aspects and the proper full up comedy lighting which allows the audience to see the many costumes designed by Shirley Pierson required for quick changes and period authenticity.  Bart Fasbender created the original music and sound design.

During the curtain call, the cast took the last on-stage call with the back-stage crew.   It was a well-deserved thank you by the cast to stage manager Annette Ye and her crew for those who help make the on stage magic happen night after night.  It was a very classy gesture.

“Baskerville: A Sherlock Holmes Mystery” performs at the Sheryl and Harvey White Stage at The Old Globe and runs through August 30, 2015.  Don’t Miss It!