Stalking the Bogeyman at GableStage 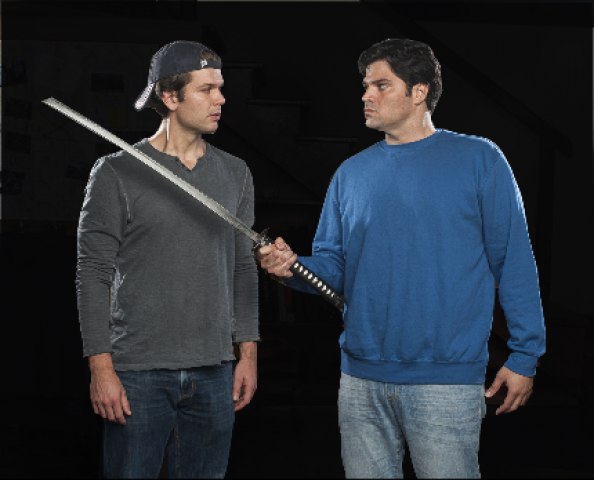 In fact, it can lead to devastating consequences, as journalist David Holthouse reminds us in a play, adapted by himself, Markus Potter and others, based on an incident the reporter experienced at age 7 during the late 1970s.

The play, “Stalking the Bogeyman,” illustrates to what extent silence can aggravate, anger and agonize. The piece is a gripping, thought-provoking, bold theatrical work running through Aug. 28 in a riveting Southeastern premiere production by GableStage.

Under director Joseph Adler’s astute direction, and some suspenseful, jarring music (the sound design is by Matt Corey), the tension is palpable and the action unpredictable, keeping our eyes and ears riveted to the stage. The intimacy of GableStage’s theater makes the action feel that much more intense.

The action is fluid, thanks to award-winning set designer and GableStage veteran Lyle Baskin’s scenic design. His wide, two-level, detailed set encompasses several locations in near proximity to each other. Each locale sports a different color, heightening mood.

Baskin’s design allows one scene to flow seamlessly into another, aided by Bryan Kaschube’s expert lighting. It’s dark and jarring during some of the play’s disturbing moments.

Holthouse originally aired his story on NPR’s “This American Life.” The play, which ran Off-Broadway and in London, is faithful to the broadcast. But it also fleshes out the true story by including, among others, the journalist’s parents. Over the course of many years, they’re blissfully unaware of what happened to their son. They’re like so many parents whose children have been violated and were likely too ashamed to say anything. We can’t help but feel pity as we watch Holthouse’s parents lead happy lives, knowing they’ll feel devastated when Holthouse finally reveals to them his secret.

An older boy, the son of friends of Holthouse’s parents, raped him, shredding his innocence and sending the future journalist on a mission of revenge and into the company of shady people. The older person’s the boogeyman, but it’s not the only one in the play and, by extension, in real life. The issues of bullying, drug use, gangs, gun access and the dangers to children in society, all accounted for in the play, are also “bogeymen” in society.

“Stalking the Bogeyman” is a psychological, compelling tale that grips you as tight as a chokehold and doesn’t let go.

One could look at the play as a tale of revenge. But it’s also about an emotionally injured young man torn between revealing to his parents what happened or sparing them the anguish of learning the horrific news. Holthouse is in protection mode, not only for his parents and himself (he was threatened with violence if he didn’t keep quiet) but for other children who might become victims of his “bogeyman.”

The play presents a morally grey area. Murder, while not condoned in the piece, becomes not just a means of vengeance, but an attempt by Holthouse to protect future children from abuse by his rapist.

Holthouse, even though he’s out to kill, is presented as a sympathetic figure -- a troubled, driven individual who has turned to drugs to perhaps numb the still very raw pain, felt even many years after the rape occurred.

The incident has never been buried in his subconscious. It’s as fresh in the forefront of his mind as though it happened yesterday. We sense that as we see his detailed drawings and maps intended to help Holthouse locate his former attacker. We also sense how vivid the incident is in Holthouse’s mind as he goes about buying a gun and researching how he can prevent its traceability (talk about a timely issue)!

Part of the play’s strength lies in its unpredictability. For example, we don’t know if at least one scene which the actors play out is real or imagined by Holthouse. It makes for riveting theater, keeping us guessing. It’s also hard to predict the ending.

This play is valuable not only for its suspense, but for its attempt to shine a light on an important issue. Without being preachy, it seeks to encourage parents to know who their children are spending time with. It also tries to persuade parents to be alert for changes, however subtle, in their children’s behavior or tone of voice that might suggest something is bothering them. Finally, it makes us look in the mirror at what evil might lie within us.

A sextet of actors expertly performs their roles with nuance and brings multiple emotions to their parts with equal skill. Four of the performers play multiple roles.

Throughout the play, the ages of Holthouse and his attacker change, as the action spans from 1978 to 2004. Two adult actors play both characters, even as children.

Alex Alvarez, as the bogeyman, avoids acting like some sort of monster, suggesting that bullies or “bogeymen” can come in all shapes, sizes and personalities. His bogeyman starts out as a hyper, fun-loving, roughhousing, teasing but seemingly good-natured teenager. However, this “bogeyman” is unpredictable.

The actor changes emotions in a heartbeat; one moment, he’s playing rough. The next, he’s grabbing Holthouse by his collar, threatening him in a voice full of menace. Then, suddenly, he lightens up as though the two just played a friendly game of tag. This bogeyman’s unpredictability suggests an instability among child molesters.

Taylor Miller invests Holthouse as a child with nervous gestures such as sinking his hands into his pants pockets and tensing his body. In the play, the adult Holthouse frequently breaks the fourth wall by speaking to the audience. Miller does so with urgency and an array of authentic sounding emotions, from exasperation to deadly determination.

The other actors fare fine as well.

Barbara Sloan plays drug dealer and Holthouse’s friend, Molly, with the air of a free spirit, relaxing her leg over an armrest on a chair in her home and appearing generally relaxed.

Patti Gardner as Nancy Holthouse, the journalist’s mother, deftly imbues her with a meddling but loving quality. Later, after she learns that her son was raped, Gardner’s voice and facial expressions betray a mixture of convincing bitterness, anguish and concern.

David Kwiat, as Holthouse’s father, conveys a loving bond with his son and a charm that turns to horror when he hears what happened so many years ago.

Bill Schwartz and Sloan, as the bogeyman’s parents, are at their best toward the end. That’s when disbelief settles into their facial expressions and voices when they hear what their son had done many years earlier. The pair convinces us their characters never saw this coming.

“I agreed to put my story on stage because doing so challenges the silence, the sickening silence, that has been the norm for so long around childhood sexual abuse and sexual assault,” Holthouse wrote in a program note.

Live theater and journalism share the mission of shining a spotlight on important, timely issues and hopefully spurring discussion and action.

Still, It’s a bold move for Holthouse to make his story public, given the horror he’s been through.