Off the Rails by Randy Reinholz 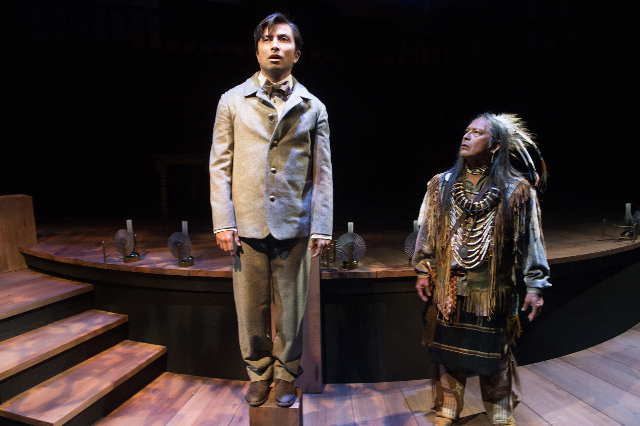 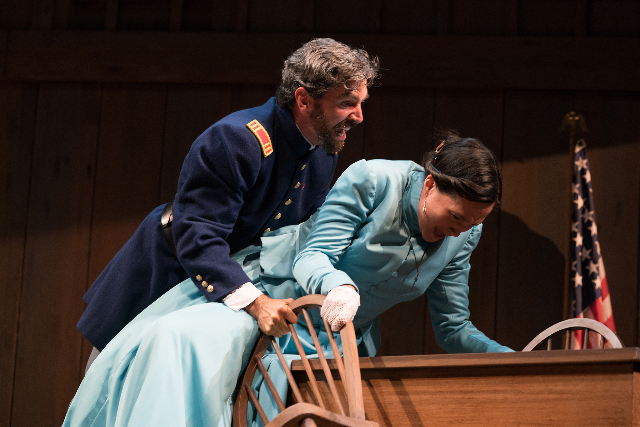 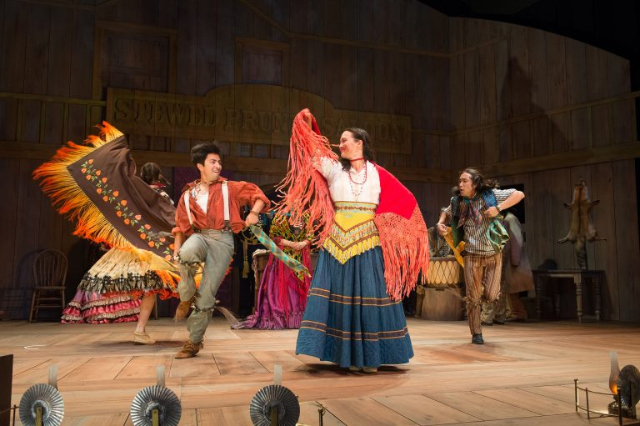 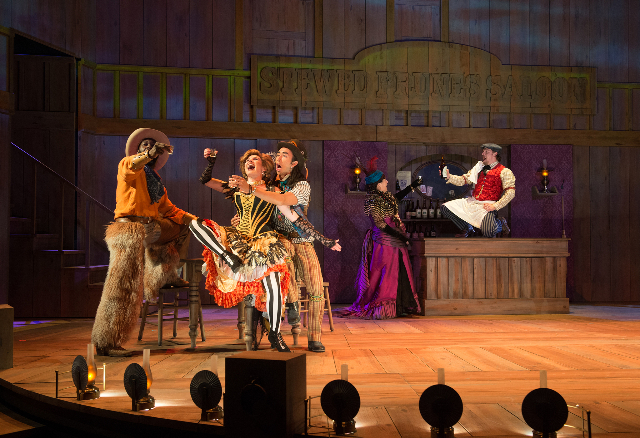 “O, what may man within him hide, Though angel on the outward side!” William Shakespeare from Measure for Measure.

Shakespeare’s canon offers fertile ground for interpretation within traditional productions of his work. His plays also provide the opportunity for modernizing and relocating the original script to breathe new life into the Bard’s masterpieces. Oregon Shakes presents an audience pleasing world premiere of Off the Rails, an updating of Measure for Measure, a comedy of moralization, abuse of power, and hypocrisy. But playwright Randy Reinholz adds a number of subplots with cultural and political elements that plumb the Native American experience to enrich the play’s meaningfulness.

Set in the 1880s against the irresistible “Manifest Destiny” of the United States, Genoa, Nebraska is the locale – a Pawnee town under the cultural boot of U.S. Army enforced assimilation. Pawnee language and religious practices are prohibited. Today, temporary mayor of Genoa, Captain Angelo, would be characterized as a retrograde fundamentalist Christian. In addition to the normal moralistic strictures in place, he prohibits women and Indians from owning businesses.

Although Angelo’s undisclosed crimes and betrayals are numerous, he displays his blatant moral corruption when he sentences Momaday, a Pawnee young man, to death for fornicating with a white woman – the evidence being her pregnancy. So begins the mobilization of forces to save Momaday and expose Angelo as a hypocrite and criminal.

Revisionist history in modern day often re-evaluates people and practices from the past by present standards. Although reasonable people may disagree about the righteousness of many historical actions and individuals, the duplicity and cruelty exacted against Native Americans by and in the name of the U.S. government make being a white man an embarrassment. In this story’s critical event, the sexual act was consensual and occurred after the couple had married in the Pawnee way, yet the man was victimized by a different moral and legal standard than would apply to a white man.

The injustices of whites toward Indians are at the forefront of the play’s events, but an important element is the indirect anguish caused by forced assimilation. In this narrative, some Indians like James McDonald, an advisor to the army general, and Isabel, Momaday’s sister, see the writing on the wall. They believe that despite the denigration and discrimination that they suffer, that submitting to the education, ideology, and practices of the white man is the wiser course. Others, like Momoday, recognize that the white man has the power, but they still embrace and fight to retain their practices and beliefs. Regrettably, these two different ways in responding to subjugation lead to conflicts among the Indians, with the submissive being cast as Uncle Tomahawks and the resisters as renegades. When Isabel is called to use her status with the white man in order to free Momaday, she confronts risking the death of her brother versus jeopardizing her future standing and opportunity.

The moral principles of Off the Rails stand strong. Conceptually, the overlay of the Indian tribulations onto Measure for Measure works well. In effect, the moral turpitude of an individual in the Shakespeare work is transposed into that of a whole people over another. Although the central event is deadly serious, anyone familiar with the source material can anticipate the ending. In the meantime, there is ample room for saloon entertainment, Indian dance, and a complex web of relationships and interfaces between the two cultures, most of which are positive. The spirit of Momaday’s deceased grandfather provides wisdom and guidance, facilitating the audience’s understanding the Pawnee way.

Part of what makes the play work is that the greater issues resonate with a contemporary educated and concerned viewer. Contrition for the sins of our fathers is the starting point. But as a society, we increasingly realize that the justice system and its enforcement does indeed apply a different set of rules for the rich and the poor as well as for the majority and the minority. Another critical topic of exploration is distilled into a line of dialogue suggesting that it is hard to know what a mad man will do when he comes to power. This drew an understanding sympathetic response from the audience.

This play is both entertaining and rich with messages. It deserves to be seen. At the same time, the playwright tries to accomplish a great deal, perhaps at the expense of cohesion. The tone changes often as dialogue alternates between Shakespearean tracts taken directly from the source and the naturalistic speech of the Old West. Incidental music is appealing but sometimes inorganic, disrupting the flow. And a subplot about a gay relationship seems a bit gratuitous and distracts from the focal issues at hand. Director Bill Rauch’s production values are high, with very appealing staging. Acting is uneven, but always at least serviceable.

Off the Rails by Randy Reinholz is produced by Oregon Shakespeare Festival and plays on its stage in Ashland, OR through October 28, 2017. Photos by Jenny Graham.

Resposted from Fall For Events courtesy of Victor Cordell.