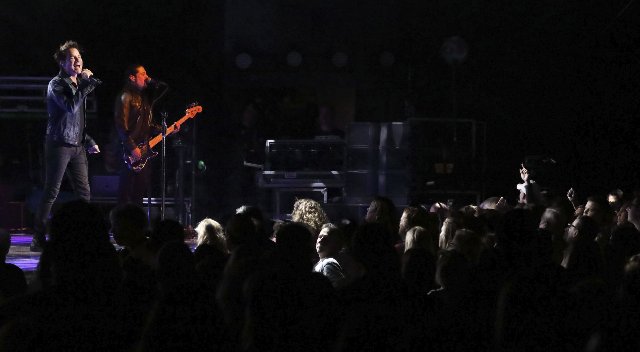 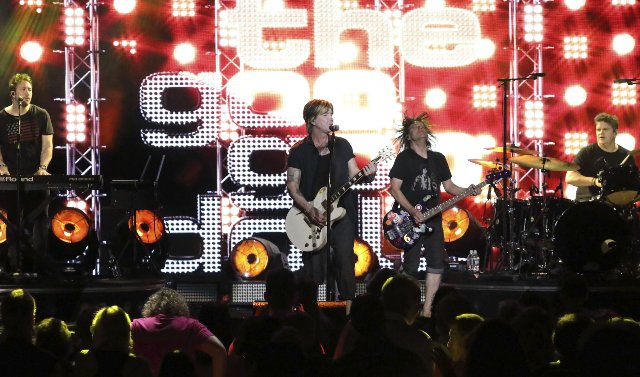 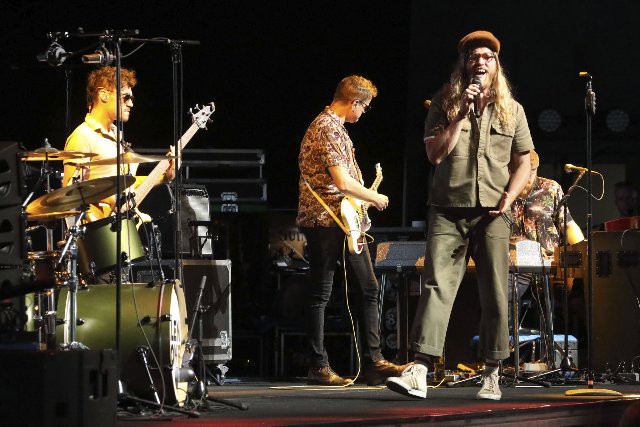 Tanglewood was rocking on Monday night (August 5th) when Allen Stone took the stage. His band was the opening act, playing only four songs, before legends, ‘The Good Goo Dolls and Train’ took the stage.

Top billing went to ‘Train’, which was questionable, considering that the ‘Goo Goo Dolls’ had nineteen ‘Top Ten’ hits. And to top that off, ‘Iris’ reached number one and held on to that position for twelve weeks.  ‘Iris’ was one of those songs that when you would turn on your FM radio, in the day, shortly afterwards, the romantic ballad would somehow appear on your radio. It’s the ‘Goo Goo Dolls anthem.

Lead man, Johnny Rzeznik discussed the success of 'Iris’ and how he wrote it in his attic apartment in Buffalo, New York. He emphasized that the ‘Goo Goo Dolls’ were not the Rolling Stones, but, for a short moment, at number one, they felt like they were.

The majority of the audience at Tanglewood was made up of women of all ages, screaming their lungs out for both lead men of the bands. Patrick Monahan of Train could be a model, even at fifty, while Johnny Rzeznik of the Goo Goo Dolls could be both a GQ model and a hairstyle model.

Allen Stone, a long haired rocker with a loud voice, opened the show. He was the perfect buffer for the three hours of music that followed. The evening was sort of like a soccer match, one team dominating the first half and the other dominating the second half.  The final score was nil-nil.

In essence, both sides won. That was the case at Tanglewood. You rooted for your favorite team-which tied with the other team in the end, making both teams and fans winners.

Train was the team with the optical illusions and theatrical antics. Think shooting cannons, fireworks, sparklers and confetti, while the Goo Goo Dolls relied only on beach balls for audience participation.

The set list was equal, seventeen songs for each band, plus a two song encore for Train. What was missing was a jam session at the end of the concert, where both lead singers could collaborate.

The Goo Goo Dolls (they came up with the name in 1986 when they saw an advertisement) took the stage with a lot of fanfare from the female dominated audience. Lead singer and guitarist, Johnny Rzeznik, was joined with side man, vocalist and bassist, Robby Takac, who, dressed and acted a lot like AC/DC’s Angus Young. The band consisted of drummer, George Tatuska, guitarist, Brad Fernquist and keyboardist Jim McGorman.

Rzeznik kept the over zealous audience on their feet all night long with a seventeen song set (64:29 minutes on the bright red time clock), which included all of their 1990s hits. The set opened up with ‘Slide’, a set that drifted through hit after hit, focusing on their number one hit, ‘Iris.’ Rzeznik, more of a singer then a talker, drifted into a ‘rare’ five minute rant about ‘Iris’ and how that song changed his and the bands life.

Cheerleader, bassist and vocalist Robby Takac was instrumental with audience participation. His energy and spirit, full of laughter and ranting raised the awareness of Johnny Rzeznik’s mission to the audience. It was a win-win concert for both the audience and the performers.

Lead singer and serious front man, Patrick Monahan, led the audience with a nineteen song set  that focused on Train’s hits through the years. Always on top of his game and a true entertainer, Monahan sang his way through memory lane. This is the third time I have seen Train at Tanglewood. Each time the band reaches new heights.

Their music was wedged in-between light shows, confetti and fire machines. Total audience participation was necessary for this theatrical evening. The band consisted of regulars, bass player, Hector Maldonado, guitarist Luis Maldonado (are they brothers?) and keyboardist Jerry Becker. There were two back-up singers that helped with harmonies.

Monahan had the audience in the palm of his hand. Everyone was connected and asked for more. Monahan shared several stories with the audience, who kept asking for more.

The encore ended with ‘Drops of Jupiter’, a song for the ages.

Co-headlining this concert at Tanglewood made sense. Two generations grew up following either of these bands. Putting them together on one bill brought the best of both groups, which focuses on pleasing songs and ballads.

It was a night to remember.