An American Daughter at Williamstown 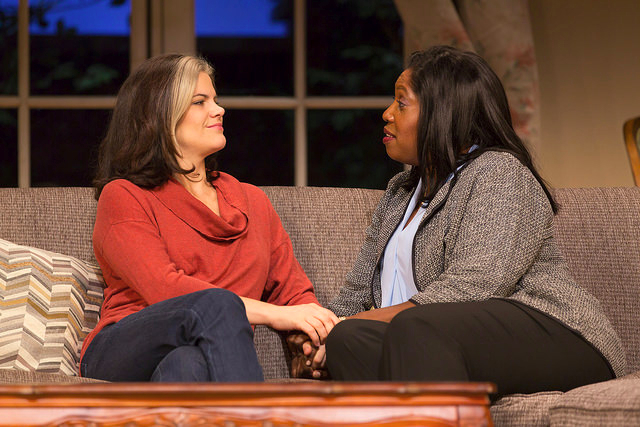 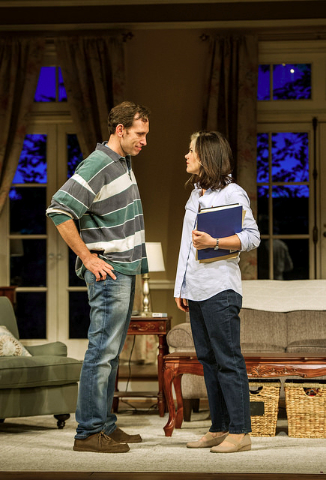 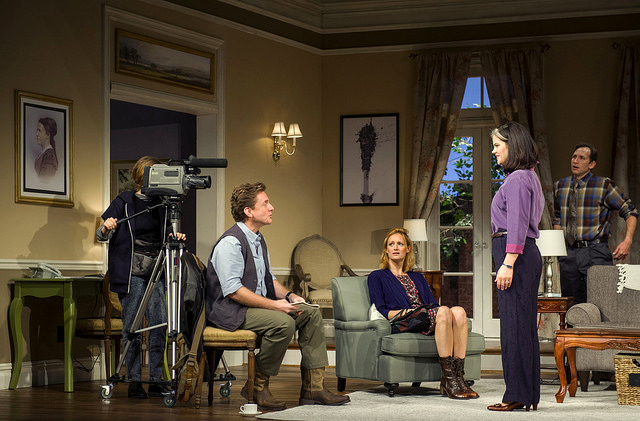 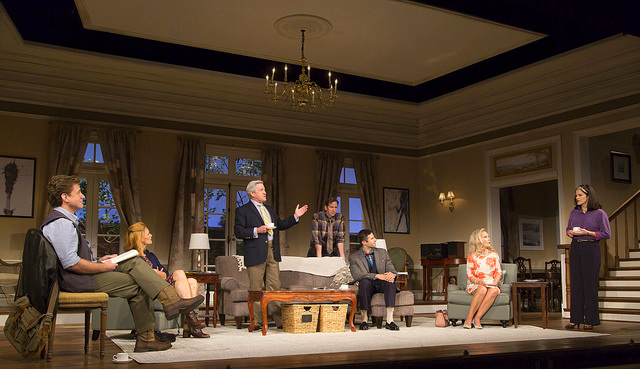 The twenty-year-old play An American Daughter, by Tony and Pulitzer winning playwright, Wendy Wasserstein, is being given an elaborately staged production at the Williamstown Theatre Festival.

The revival presents a strong, smart, well qualified woman mired in political scandal being taken down as lunch meat by the ravenous, scandal mongering media.

What about that seems timely and familiar?

In the number of actors on stage it is a large play that fills to capacity the spacious, house-beautiful, Georgetown living room of a Beltway power couple. The set which is meticulous, including French doors with a view to the patio and stairs to an upper floor, has been designed by Derek McLane with sharp lighting by Ben Stanton.

The set is dressed for success, complementing the ambitious characters, but feels cold, generic, lacking a lived-in feeling which is reflective of their sangfroid personas.

As Lyssa Dent Hughes (Diane Davis) she is the daughter of Senator Allen Hughes (Richard Poe) and a direct descendant of Civil War general and president Ulysses S. Grant. She is married to Dr. Walter Abrahmson (Stephen Kunken) an academic with a formerly best selling text book and fading career. He outs himself with the line “Whatever happened to.”

Politically connected, she went to boarding school with the First Lady, and three of his Harvard classmates are in the Cabinet. Lyssa has been nominated for the post of Surgeon General.

Passionate, with an agenda of women’s health issues, she is anxious to make an impact. For a Senator’s daughter, however, she is naïve about the vetting process and the voracious media which, following a gaffe, is camped on her lawn. The Senator provides her with a spin doctor Billy Robbins (Will Pullen).

During an at home interview with Timber Tucker (Jason Danieley) on his about to be cancelled TV news magazine, Time Zone, she has been advised to dress in pastel, wear a head band while focusing on domesticity and family.

As a strong, ambitious woman, not only does she want to have a social and political impact, but also tries her best to be a good wife and mother to their twin sons. We see this very busy working mom folding laundry while the kids, heard but not seen, loudly state their needs and issues from off stage.

Given the enormous pressures of her personal and professional life several times she has pleaded to the judge to be excused from jury duty. On one occasion she may, or may not, have simply forgotten and failed to call to be rescheduled.

Hey, things happen, but a lapse of  citizen’s responsibility is sure to sandbag her candidacy.

Have you noticed a similarity with Hillary Rodman Clinton? Consider the accusations that she has lied to the American people regarding the use of private cell phones with classified messages.

In selecting this play to dovetail with unique aspects of the current politics the production has eyes on the prize. It is all too true that there is a double standard when judging a strong woman vs. a snake-in-the grass, male candidate like Donald Trump. With seeming impunity he lies constantly, refuses to produce tax records, sought five deferments from the draft, and humiliates the parents of a fallen Muslim soldier.

Accordingly, this revival feels both timely as well as dated. It is riddled by social and political clichés with broadly stereotyped characters. Each and every actor, with varying degrees of success, plays to type.

The nickname Chubby is played for cute. The gag is that she is anything but. With one-dimensional writing Wasserstein gives the apt Rush nowhere to go with the role.

The writing of Wasserstein, and chaotic direction of Evan Cabnet, puts this mishegos menagerie of cartoonish characters in a pressure cooker and watches them explode. There are some zinger lines and snappy sequences of dialogue but, by the end of the evening, the whole is less than the sum of its parts.

In a chicken/ egg conundrum it often felt like we were watching an episode of the TV series Madam Secretary. That show similarly balances a strong and successful woman with an academic, professor husband, and kids to raise. While there may be more than a coincidence the current TV show, which too often bogs down with home life, feels fresher and more with it than Wasserstein’s dated, agenda-driven play.

What drags down the WTF production is the lack of charisma and synergy of the leading couple. The performance of Davis is understated to the point of apathy. Her response to pressure seems less cool and calm than catatonic. When she finally confronts her husband about an affair, after a week of turmoil and mess, he rightly asks why she is bringing that up now? In one of the best quips of the night she responds with a line that underscores her character “I’ve been busy.”

There is a muddle of how she responds to the other woman. The perky and gorgeous Quincy Quince (Kerry Bishe) is her husband’s former student and most successful protégée.

Wasserstein paints her as a next generation feminist. Quince has insinuated herself into the home on slim pretext. Seizing opportunity she is making the rounds of TV news shows allegedly in defense of Lyssa. In reality Quince stridently increases media visibility as a best selling new age feminist. Bishe, by the way, does this exceedingly well.

As a smart and ambitious best friend Wasserstein gives Dr. Kaufman a heavy load to bear. We devour the over-the-top, you-go-girl, performance of the earthy and hilariously sharp-tongued Ekulona. It is possible, but hardly probable, that this ambitious soul sister is, good grief, Jewish.

But that’s not all folks. She is tasked with trying to beat the count down of her biological clock. When her BGF urges her to give it up there is a sharp exchange. The point is made that Lyssa has kids, twins in fact.

There is a Jewish day of atonement for sins. This is expressed by casting unconsumed food into the Potomac. In general this may mean bagels or brisket but for Hughes it is a fat free, cranberry muffin from Dunkin Donuts.

In a frenzy of guilt she has plunged into the river then walked soaking wet to the home of her best friend. It goes south from there. Hey folks, enough is enough.

There is more excess than success as finally Lyssa, at home on her couch in pastel with matching head band, gets real with a Geraldo-flavored (remember him?), dirt digging, populist, ersatz TV news man Tucker. Smarmy news and attack journalism has only gotten worse in the past two decades. Consider that this play preceded the rise of Fox News and the Koch Brothers.

Boxed into a corner about deception and skewed family values Lyssa explodes, tears off the microphone, halts the interview and rightly asks what all this crap has to do with qualifications to serve?

In a cut from the headlines reveal she calls the President, who hung her out to dry, and withdraws as a candidate.

Is it possible that Wasserstein was inspired by a 1993 incident? Lani Guinier was President Bill Clinton's nominee for Assistant Attorney General for Civil Rights in April, 1993. That ended a month later following a wave of negative press that was brought on by her controversial writings which Clinton found "anti-democratic" and "very difficult to defend." She plunged from Friend of Bill (FOB) to persona non grata.

For the third time this season the Main Stage of  WTF focuses on a strong woman. The first play featured Marisa Tomei in a revival of Tennessee Williams’ The Rose Tattoo.

In program notes artistic director Mandy Greenfield states “…Boo Killebrew’s Romance Novels for Dummies will happen on the main stage right before Wendy Wasserstein’s An American Daughter. How many great comedic, dramatic female voices has our country produced? A lot. But how many are really known. Wendy is well known and, I humbly submit, Boo will be known.”

Fighting the good fight is admirable; ultimately however, it has to succeed as compelling theatre. While the three plays were superbly produced, with Broadway quality technical values, for fascinating but significant reasons they fell off the mark.

In a long standing WTF tradition we missed having a stunning, main stage musical in the mix. There was, however, Poster Boy under development (not for review) in the smaller Nikos Theatre.  Maybe next year.