At The Bridge Yard 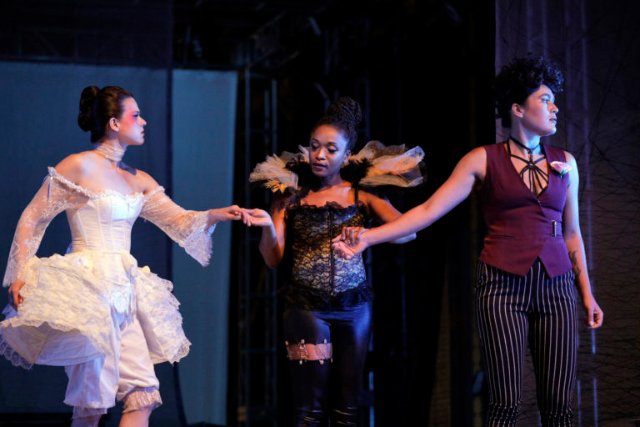 Deeply rooted in Greek mythology, the story of Orpheus and Eurydice is one of the most enduring and oft refashioned tales in literature, with interpretations by Virgil, Ovid, and more modern artists from all creative fields from theater to sculpture. In the opera world alone (get ready for this), works by over 70 composers have been created based on this story. Of those, only a handful are produced with any regularity. Christoph Gluck’s interpretation, Orfeo & Euridice is among those, and West Edge Opera’s production of it is a fine and innovative contribution.

Though Gluck was of Germanic heritage, Italy dominated the world of opera that he entered as a composer. After operating in the Italian idiom for two decades, Gluck felt the need for reform of standard practices, and his treatment of this classic love story was his maiden effort and a significant event in the opera world. Among the changes that he instituted were replacing the florid character of the music and singing with simpler melody and singing style; reducing repetition; blurring recitatives and arias to provide a smoother melodic flow; and giving greater importance to words and story.

This time period coincided with the cusp of two other relevant movements in music. Late baroque was giving way to classical style, and French influence in opera was ascendant. Indeed, Gluck would move to Paris and in 1774 would complete a French version of the opera with significant changes in the music and a new libretto.

The familiar plot is straight forward. Euridice has died and passed to the other side. Amore tells Orfeo that he can bring her back if he doesn’t look upon her during the return to the living. Orfeo fails the test.

The spare nature of Orfeo & Euridice is well suited to a smaller opera company. Requiring only three principals, casting is simplified. This small entourage and extensive use of dance by nymphs also make it conducive to the barest of staging. Mikiko Uesugi’s set design of gauzy hanging sheets certainly qualifies.

The key distinction of this version is that Director KJ Kahlaw has reframed the myth with queer (or more accurately, non-cis-male) sensibilities. All of the stage performers, creative designers, and production managers are female or non-binary. That said, the impact of this approach is more apparent in the personnel than in the actual performance of the opera. The most obvious evidence of a queer agenda is the selection of a non-binary artist as Orfeo, but even that is not a stretch, as the role has often been played by women.

Fortunately, whatever gender classification, Nikola Printz meets the demands of the role of Orfeo, and this is really Orfeo’s opera. Euridice doesn’t even sing until 30 minutes before its end – but she is ready for her “close up” when it comes – with a duet flanked by two arias. The first act is largely a series of soliloquies by Orfeo broken by a couple of interventions by Amore and occasional chorus and dance. But Printz possesses a warm, shimmering mezzo-soprano voice and dominates the stage with a controlled urgency.

Maria Valdes portrays Euridice in exemplary fashion. Her beguiling lyric soprano voice and radiant stage presence suit the role ideally. Shawnette Sulker brings a charming, magnetic quality to Amore, along with a coloratura soprano voice having great expression. Collectively, the three singers possess vibratos of similar character, so that their voices are very compatible with one another and produce a pleasant confluence.

Gluck’s musical palette is in transition in this opera, and along with the spare reform mode, the showier style of the past remains in some arias. But the music is melodic throughout if not totally memorable. The exception is the famous and notable signature piece at the closing, Orfeo’s lament “Che farò senza Euridice?” (“What to do without Euridice?”).

Perhaps the greatest weakness of the opera and this production is its overall leanness. The small cast, the modulated music, and the minimalist staging yield a static quality almost suggestive of a concert version of a chamber opera. To some extent, the few ensemble numbers and the dynamic, stage filling nymph dances compensate.  The dance choreography by the director, who comes from the dance world, works well, but the execution is uneven, likely caused in part by the mismatched sizes of the dancers. In any case, it is a deserving offering produced by a courageous and competent opera company.