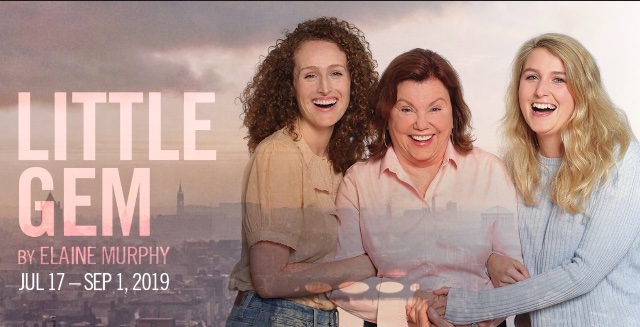 Irish Repertory Theatre Presents the award-winning Little Gem by Elaine Murphy. This piece about three Irish women won the Fishamble New Writing Award in 2008 and the Carol Tambor Best of Edinburgh Award in 2009. The density of her language and the poignant humor of her vision captivates.

Ciaran O'Reilly, Charlotte Moore and The Irish Repertory's polished production support staff have brought this well deserving piece to their stage. We are in what appears to be a waiting room in a doctor's office.  Yet the room represents all the rooms inhabited by three women: a bedroom, bar, parlor, office, shop, kitchen, schoolroom, church and grave yard.

The time is now. Neon pink sweaters and vibrators are common props. Modernity integrates itself into the lives of the women, lives familiar to all of us.  Self actualization as a life goal hangs over these women, just as it hangs over us. We watch lives unfold with curiosity, acceptance and alarm.

Marc Atkinson Borrul takes on the directing job.  Each of the characters delivers her story in monologue, portraying feelings as she creates the lives of others.  Meredith Reis lights not only to set the scene, but also to provide transitions from one home to another, one character to another.  Quotidian events reveal life lived intensely.

The three women come from three generations of one family.  Teenage Amber (Lauren O'Leary), her mother Lorraine (Brenda Meany) and Lorraine's mother Kay (Marsha Mason) each draw a world specific to them. Rarely do the women's world's intersect.   Instead we focus on pictures of the men they love. In fact, the men are incarnated through language and the portraits drawn by these women. Although the men are not physically present on stage, they come alive as the women speak. Little Gem is as much the men's story as it is the women's.

Mason is moving and memorable as the family matriarch. As she kneels beside her adored husband's grave, we sense that she has come to the end of her own life.  Her loneliness is palpable. She was married at seventeen to her one and only love. Her daughter Lorraine still suffers from memories of her husband, an abusive, drug addict who won't leave her alone.  Amber, the teen, is pregnant, but the child's father does not count himself up to fatherhood.

Murphy takes us deeper than the conventional 'feminist' play. While she worked at a Dublin women's clinic, Murphy saw first hand every day heroines like the women in this play. Do men or women ever stand alone?  Are we not reflections of the hearts we have touched. Our short-comings and our victories spill over into the lives of others. Wit rather than sentimentality drives this drama.  The characters become important to us. We remember that the lives of those we love will be part of our lives forever.