Past, Present, and Future Ghosts of the Imagination 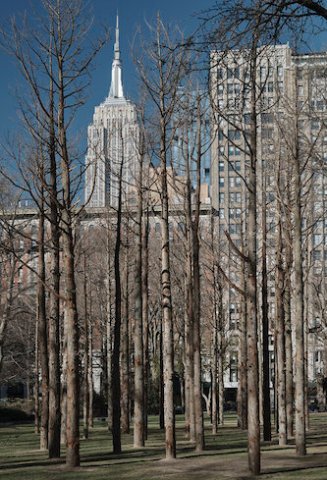 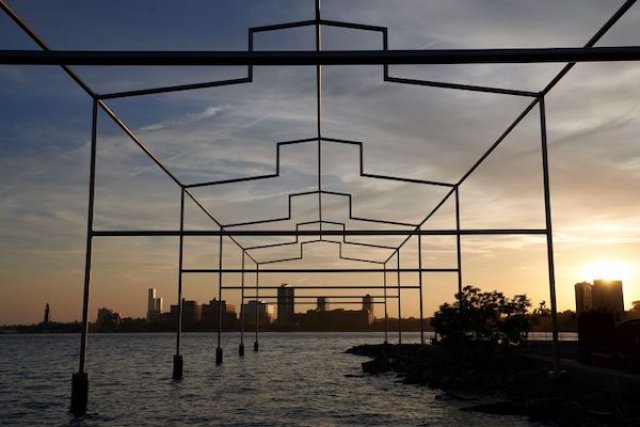 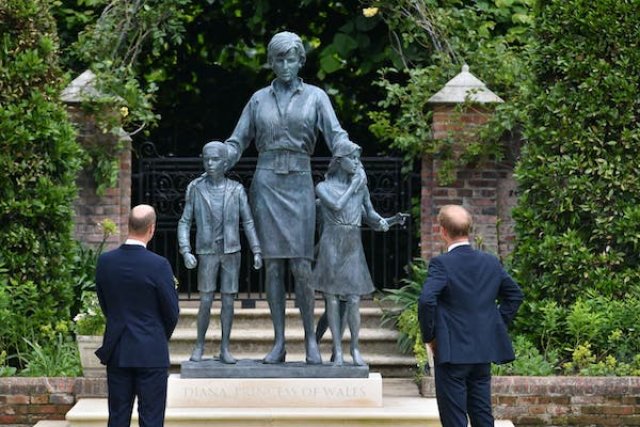 The Duke of Cambridge (left) and Duke of Sussex look at Ian Rank-Broadley’s statue (2021) in the Sunken Garden at Kensington Palace.

Recently, a number of public artworks have been charged with memorializing ghosts or “specters” of the past.

For many, public art  conjures up images of bronze statues of a soldier on horseback, images of historically significant and/or forgotten politicians or leaders, or symbolic (often mythological) figures of metaphoric significance. But these days public art takes a wide variety of sizes, shapes, and forms. It can be temporary or permanent. Because this kind of art is made to be visually and physically accessible to the public, the artist’s goal is to embody universal concepts that should have both aesthetic and conceptual value. The responsibility of public art is to encourage us to reflect in ways that, hopefully, will elevate our collective public discourse.

A strategic twenty first century approach to public art focuses on themes that embrace and interpret the history of  a place and its surrounding population. It is also expected to address social and/or environmental issues. Recently, a number of public artworks have been charged with memorializing ghosts or “specters” of the past. These “spirits” range from our deteriorating environment to urban blight and martyred heroes.

Maya Lin’s Ghost Forest, a stand of skeletal trees, was set up in New York City’s Madison Square Park on a green area located ten blocks south of the Empire State Building. This temporary public art installation opened in May, and consists of a grouping of 49 dead Atlantic white cedars that were “harvested” from New Jersey’s Pinelands, an area destroyed by rising saltwater sea levels and other aspects of catastrophic climate change. Rigidly funereal, Ghost Forest is serious to the point of being intensely grave. Wit and even irony have never been part of Lin’s aesthetic. But, considering the subject matter, this starkness makes a certain amount of sense.

These once majestic cedars, along with the myriad forms of life they supported, once covered hundreds of thousands of acres of New Jersey and New York. The trees have now disappeared. The ones used by the artist underscore a gaunt vision of what has become a deteriorating wasteland. Solemnity seems in order, but the silent vigil cast by Ghost Forest may be just too solemn.

Lin explains that Ghost Forest is a dire warning about the earth’s (and our) rapidly approaching fate. The dead trees are representative of the end-game generated by our environmental indifference to what humans have been (and are) doing to the natural world. There were plans for an audio accompaniment to the project that incorporated the sounds of birds lost to our ravenous political-economy. Lin’s earnest message is more like a sleep-inducing sermon than a hell-fire visual oration. Ghost Forest is not one of her more profound pieces.

In 2017, the Whitney Museum commissioned the conceptual artist David Hammons to create Day’s End, a permanent public art piece located in the park, along the southern edge of Gansevoort Peninsula, directly across from the Whitney. It sits within the large footprint of the former Pier 52.

Completed earlier this year, Day’s End is a skeletal recreation of Pier 52, an abandoned industrial shed that once jutted into the Hudson River next to the High Line. Its name was inspired by conceptual environmental artist Gordon Matta-Clark’s radical transformation of the building in 1975. In that sense, it is a “ghost monument” to the earlier work by Matta-Clark. The structure also references New York City’s working waterfront history, the Meatpacking District,  and the contribution of artists to the neighborhood, along with the area’s ethnic histories, its L.G.B.T.Q. history and the estuary’s evolving ecology.

Day’s End rises directly south of the new Gansevoort Peninsula Park, which includes a sandy beach area with kayak access and a seating area; a salt marsh with habitat enhancements; a large sports field. On the park’s western side there are picnic tables along with lounge chairs. With Covid-19 restrictions lifting,the area has already become quite busy.

Matta-Clark’s guerilla conceptual artwork was edgy, visceral and perhaps even dangerous. This new artwork is large, 52 feet by 325 feet by 65 feet, to the point of being environmentally intrusive. It is more than three times as deep as a single Manhattan building lot and more than twice as wide. In addition, the work is also almost as tall as a five-story building.  Hammons’ Day’s End can be admired for its gargantuan heft, but the completed piece comes off as much too calm, safe, and architecturally elegant. This $17 million ghost monument should have been fashioned to be a more powerful visual metaphor. And how will it impact its natural surroundings?

Speaking of monuments to ghosts, Royal brothers Harry and William unveiled a monument in June to their late mother, Princess Diana, in recognition of what would have been her 60th birthday. The bronze figurative statue stands in the Sunken Garden on the Kensington Palace Grounds. Surrounded by the woman’s favorite flowers and plants, the  piece presents the late Princess with her arms around three unknown children, supposedly a reference to her work for humanitarian causes.

This secular (semi-religious?) version of the Madonna and children is early mundane 20th century statuary rather than uplifting 21st century provocative sculptural form. Created by conservative figurative artist Ian Rank-Broadley, the statute earnestly feeds the semi-cult of Diana worshippers. It is too literal and not very good. The figure of Diana is stiff and lifeless; there is very little joy as she exercises her altruism. She is connected from the badly-scaled, adult-like children statues standing in front of her. The piece captures none of her humanity, vitality, or personality.

Unfortunately, the Di statute is representative of the badly done, equally sterile statues of athletes and alumni that blot our stadiums and university campuses. This “I may not know anything about art, but I know what I like approach” to celebrating important public figures — via calculatedly insignificant artwork — is a waste of money and effort. Of the Diana homage, one thoughtful English critic wrote that at least the flowers in the garden were nice.

And this critique segues into a soon-to-be installed public art piece on the Boston Common: The Embrace, a bronze-finish sculpture of two pairs of giant arms embracing each other to honor Coretta Scott King and Martin Luther King Jr. Artist Hank Willis Thomas’ 22 foot high sculpture was inspired by a photo of the  married couple embracing after King Jr. had been awarded the Nobel Peace Prize.

According to Thomas, the focus of The Embrace is on a neglected part of MLK’s legacy. At the root of his efforts for Civil Rights was his loving relationship with his wife. This figurative sculpture was the most tradition-bound of the five finalists. But, according to Thomas’ collaborators, MassDesign, the piece is different in a distinctive way. The Embrace will be constructed of bronze-plated stainless steel with a mirror finish, so spectators will be able to see their own reflections in bronze. The artist hopes that viewers, through their reflections, will see themselves as part of the continued legacy of the Kings’ work.

A committee of Martin Luther King and public art scholars, arts administrators and artists, led by Edmund Barry Gaither, the director of the Museum of the National Center for Afro-American Artists, and Karin Goodfellow, the director of the Boston Art Commission, chose Thomas’ winning design. Prior to  its selection, the five designs were on display for a month at the Boston Public Library in Copley Square and the Bruce C. Bolling Municipal building in Nubian Square. The public was invited to provide comments.

Examining the renderings available, this artwork appears to be rather awkward, too literal and seemingly inelegant to be sited on the historic Boston Common. Hopefully, the completed piece will express the dignity, passion, and spirituality of the rich and complex lives and achievements of the Kings.

An urban designer and public artist, Mark Favermann has been deeply involved in branding, enhancing, and making more accessible parts of cities, sports venues, and key institutions. Also an award-winning public artist, he creates functional public art as civic design. The designer of the renovated Coolidge Corner Theatre, he is design consultant to the Massachusetts Downtown Initiative Program and, since 2002, he has been a design consultant to the Red Sox. Writing about urbanism, architecture, design and fine arts, Mark is Associate Editor of Arts Fuse.