Imagine the Jazz Master at 70 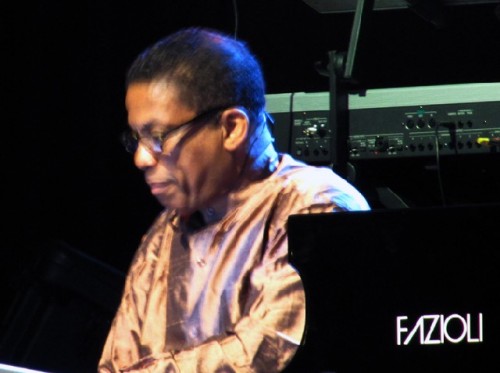 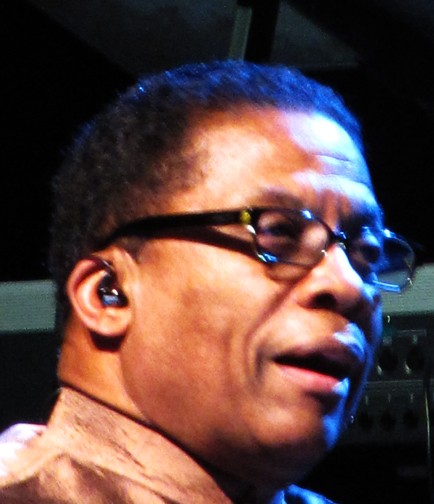 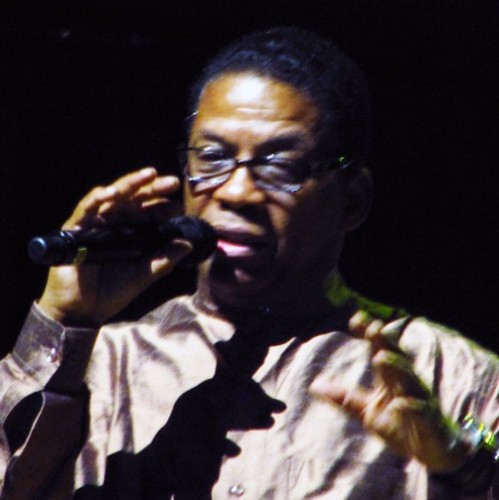 He discussed global peace and brotherhood with the audience. 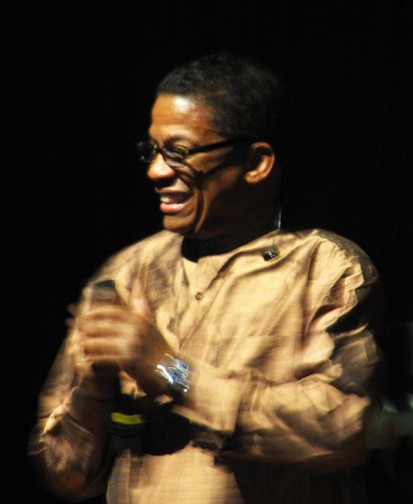 Put your hands together. 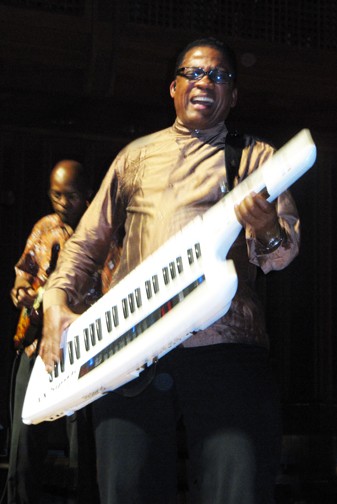 Walkabout with a portable keyboard. 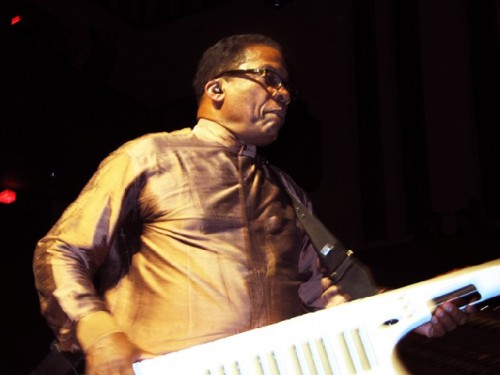 Playing with a strap on. 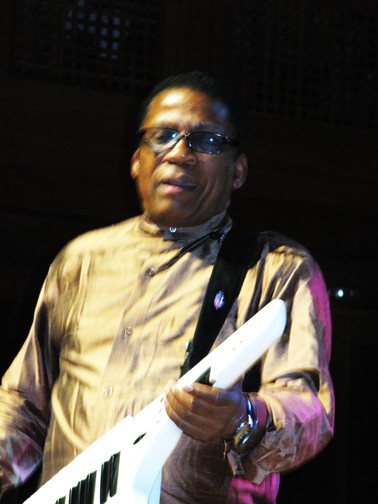 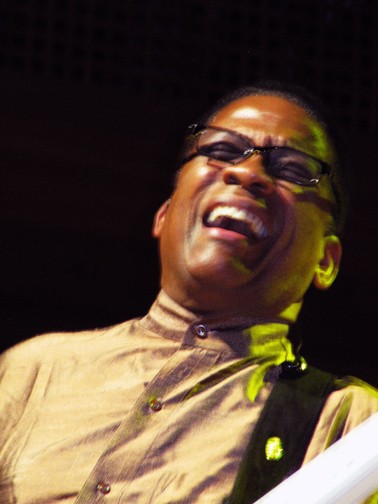 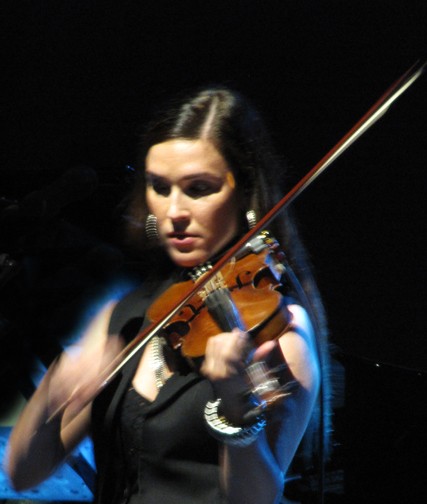 Kristina Train added a touch of violin to the bridge of a Dylan song. 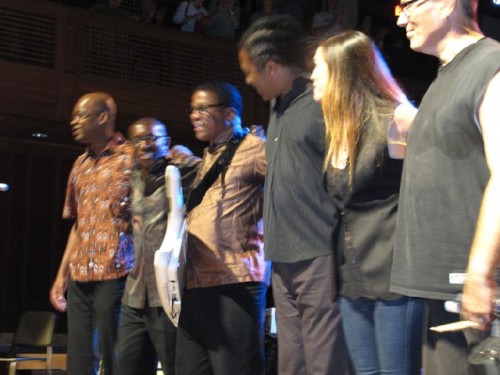 The band takes a bow. 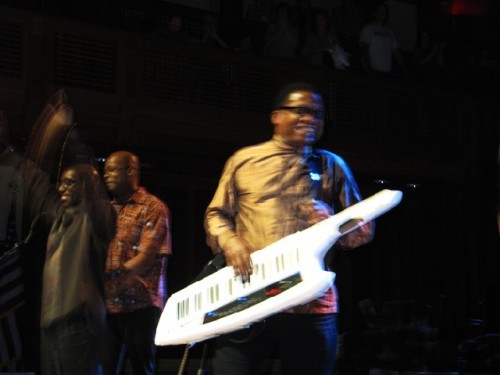 There was a sublime confluence last night as a crown prince of the keyboards, Herbie Hancock, brought his Imagine tour to that Stradivarius of concert venues, Ozawa Hall at Tanglewood.

Although the Tanglewood Jazz Festival has taken hold as an annual Labor Day Weekend event, this year shortened by lopping off Friday night, there are too few opportunities to hear the top tier performers during high season. Headliners on that level are not generally included in the Festival. Although they are regularly featured, along with the top rock acts, at the region’s Saratoga Performing Arts Center.

We have heard the BSO and its conservative keepers of the flame argue until we are blue in the face about the mandate to stay true to the mission of classical music. Surely we get more than our fill from Mozart to Mahler. Fine.

But as a full house on a Monday evening more than aptly demonstrated there is a real craving to hear the top jazz artists in the ideal standards of Ozawa Hall. It is rare to hear superb performers like Hancock under such pristine conditions.

Give or take a few months Herbie and I are the same age. He turned 70 on April 12 and I hit the big seven zero on October 25. In a sense we grew up together. Back in the day when I was the jazz critic for the former daily The Boston Herald Traveler I regularly heard him on the club circuit.

On many levels Herbie remains one of the most charming, warm and accessible of the jazz greats. He has always been generous with reporters and fans. Those drop dead looks, think Denzel Washington, have mellowed. On stage he appeared fuller in the face and thicker in the middle. Hey, who am I to talk. It was good to update my photo file.

We crossed paths around the time of his seminal Head Hunters album in 1973. Of course, over those oysters, we talked about Miles. I was hanging with Miles in those days and Herbie was one of the handful of greatest pianists of his generation who had passed through the Davis ensembles. That is after the departure of Bill Evans who returned to the studio with him to lay down tracks for the greatest of all jazz albums Kind of Blue. That LP turned 50 last summer. It also marked the departure of Trane who recorded Giant Steps that same year.

Miles played a gig at Harvard Stadium not long after the release of Bitches Brew in 1969. Although Larry Coryell (B. April 2, 1943) had already introduced fusion style jazz it was Miles that changed the paradigm. The key was the ostinato bass figures of a young player Michael Henderson.

Just a week after the Harvard Stadium gig I caught Miles at Lennie’s on the Turnpike. That night he had Henderson on bass as well as Jack DeJohnette, drums, Gary Bartz reeds, mostly soprano sax, guitartist John McLaughlin sat in that night, as well as both Chick and Keith on keyboards. Miles was striving for a rock sound so he had them set up with those early Fender electric pianos. Keith hated it.

On my way to the car after the gig Sal Ingeme, from Columbia records, caught up with me and said “Miles wants to talk to you.” I had been running a series of Sunday features on him and the transition to Bitches Brew.

In the small dressing room Miles never turned around. He talked to me over his shoulder. He looked at my reflection in a mirror as he slowly combed his hair. I asked some questions but he just said sheeeeeetttt. They were that jive. Then I asked what he wanted to talk about.

“Did you hear the gig tonight” he asked in that gravely, hoarse, whispering voice. “I’ve got a problem and I want your advice. I’ve got Keith and Chick. I can’t carry them both. Who should I get rid of?” I mumbled and muttered something. “I’m going to fire Chick. Keith gives me more.”

By then Herbie was already well on his way to establishing himself as a major artist. Chick and Keith were to follow. If Miles were to ask me that question today I would say Herbie. Yes, like Chick and Keith he can take those spacey detours, trips to those arcane musical destinations from which no traveler returns. But he is also the most grounded, funky, hippest and least pretentious of the big three of his/ my generation. Truth is I have never, well never say never, rather mostly don’t like Keith. Way too precious. Like the time I was the MC for his show at Harvard’s Sanders Theatre.

Yeah, forgive me for getting all nostalgic and wandering down memory lane. But last night catching Herbie in the Wood got me all mushy and stuff. Just groovin on those stunning sounds.

Straight no chaser it was a two hour and fifteen minute set. Mostly it wandered and meandered about. Including a solo passage on that magnificent Fazioli grand piano. He wasn’t playing the ax so much as exploring it in such a sensual manner. It seemed like nobody was in the room as he indulged in a soft and mystical communication exploring all of the full potential of a great instrument. He could have been home alone instead of in the packed hall. You could hear a pin drop. It reminded me of Miles and that great album with Herbie Quiet Nights. Miles could be so moody and melancholy. A quality Herbie shares with him. A lot of the audience didn’t dig it. A bunch got up and left.

Truth is, then and now, Herbie tosses together a strange and confounding set. Part of the problem is that a pianist gets stuck behind the keyboard. Mostly you get a profile shot all night. But Herbie wants to be a rock star. So he straps on that guitar like keyboard the Roland AX-7 keytar and struts up and down the stage. Trading licks with his sidemen. He's been doing this for decades.

As always he fronted a tight band. It featured on guitar the African born, Lionel Loueke from Benin. The drummer Vinny Colaiuta was set up behind a transparent folding screen. I have never seen that before in a concert. It seemed to stick a mute on the percussion balancing so it never overwhelmed the acoustic piano. Hovering above Herbie was another electronic keyboard player, Greg Phillinganos. He was also a vocalist. James Genus played bass. It would have been nice to have a horn player or brass. We missed Miles. Oh well.

For most of the evening Herbie just locked into a groove and comped. He switched effortlessly between the grand piano and an array of electronic keyboards. There was a mini computer set up that allowed him to create all kinds of exotic sounds. At times bottoming out on a thumping bass line that stuck in our guts. Coming out of an extended vamp he would throw in a few lines from his familiar repertoire. We caught snatches of the early hit "Watermelon Man"  or  "Cantaloupe Island." It kept you sharp and attentive although most of the audience with the exception of pockets of brothers and sisters were just hopelessly lost and confused.

The audience came for the name and reputation, the bragging rights. But Herbie took them to school. It was a stretch for the usual Tanglewood crowd.

If that had been all the audience would surely have gone home pissed. But Herbie is such a consummate showman that he knew just when to draw in the audience. He came out front for a long intro to the current Imagine Project. Having so many albums under his belt he opted for something different. As a touring jazz artist he is truly a world citizen. He informed us that it had taken two years to record the just released album. It entailed sessions in seven languages and seven countries with musicians representing 11 nations. The Imagine Project embodies international superstars from all corners of the world. Artists include Dave Matthews, Anoushka Shankar (Ravi Shankar’s Other daughter), Jeff Beck, The Chieftains, John Legend, India Arie, Seal, Pink, Juanes, Derek Trucks, Susan Tedeschi, Chaka Khan, K'Naan, Wayne Shorter, James Morrison, and Lisa Hannigan.

If only her performance proved to be as sharp as her tongue. She was certainly easy on the eyes as she slinked and titubated in time to the beat. Although she has the pipes I found her rendering of  "Imagine" the John Lennon classic hard to follow and oddly unmoving. Train is a belter to be sure but she just lacks the life experience to bring passion and conviction to the lyrics. I just never felt anything compelling to that Lennon anthem which has the ability to move us to tears.

This proved to be true later in the program when she returned for Dylan’s "The Times They Are a Changing." Hancock informed us that it has been performed on the album by the Irish Singer Lisa Hannigan accompanied by the Chieftains. It entailed Irish bagpipes and was sung in English and Gaelic. Here Train offered a bridge with violin. This segued into the Sam Cooke soul standard "A Change is Gonnah Come." It featured Phillinganos who briefly sang off mike. He was then joined in a duet with Train.

By then the band had been on stage for some two hours. But the audience wouldn’t quit. By the end of the set Hancock had everyone on their feet and dancing. He came back with his strap on keyboard and cavorted about in a funk groove. Workin it. Later.