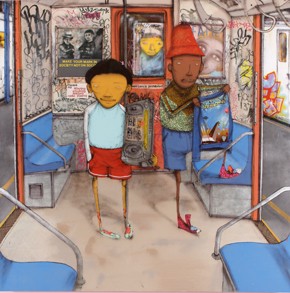 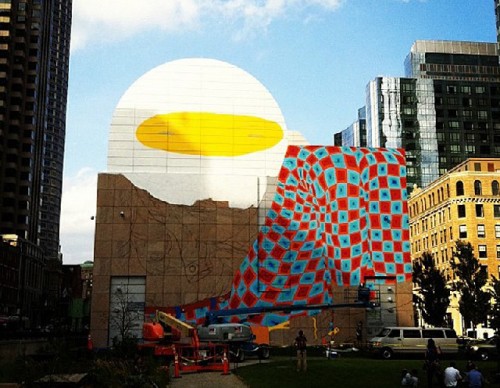 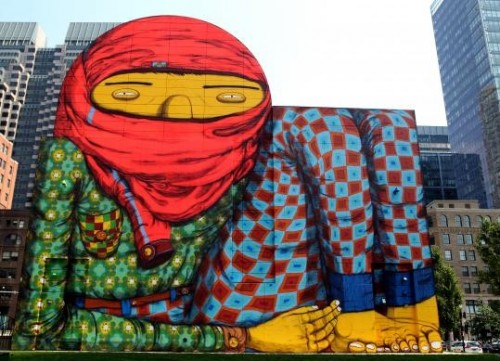 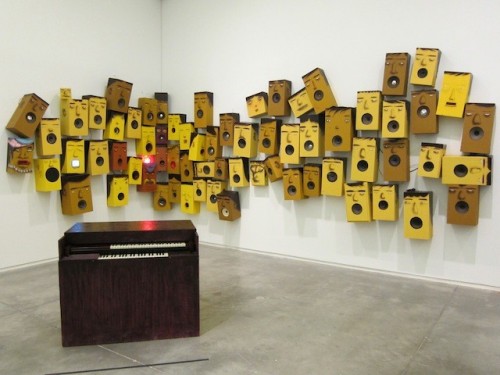 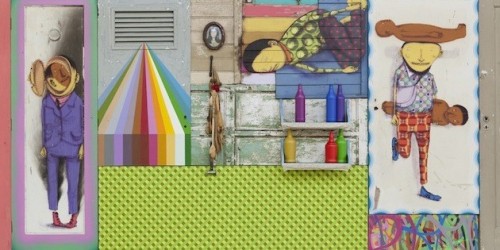 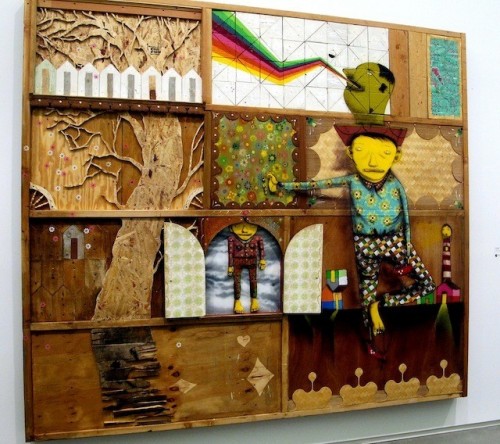 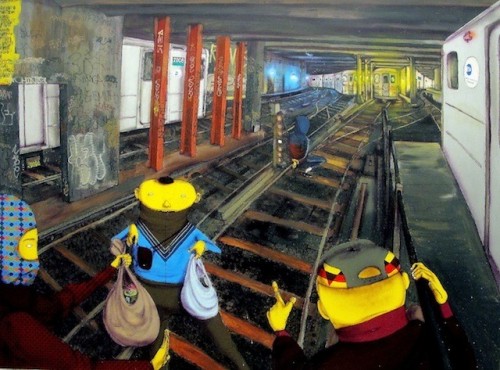 All the ICA needs to convince any of the naysayers of the Greenway Os Gemeos mural (and defuse the artificial commentary stirred up by opportunistic local media) is somehow entice them into the gallery of the ICA itself. I dare their socks not to be charmed off by the cuddly and cute 21st century brand of graffiti art they find inside.

These twin brothers from South America generate warm, fuzzy feelings with their universal language and easily accessible version of “street art.” A form of folk art, or cultural expression, that first invaded high profile galleries in the 1980s. It’s clear by this point that continued or renewed focus on graffiti isn’t a revival or a return; it’s become an established tradition, one of the options for expression that speaks (like Surrealism and Pop Art once did/still do) to large portions of an interested audience.

That Os Gemeos’ wizened yellow figures resemble nothing so much as refugees from children’s books surely doesn’t hurt. It’s not that serious matters are ignored, or that some of the imagery can’t be abject, or historically relevant, or reflective of a native cultural heritage. It’s just that the way the brothers' work tends to colorful decoration. The contrasting patterns are so carefully and frequently applied (often enhanced with a layer of sequins) that beautiful seduction is a part of their appeal and process.

The alliance between graffiti art and hip-hop music was apparently as seductive in Brazil as it was in America. There’s a beat-box hum underlying and uniting the bright energies in most of this work. That’s made explicit in an intriguing take on a home-made organ, where an electric keyboard is wired to a wall of speakers (each painted to resemble a face – the speakers are the mouths; the brothers are all about faces, inside, outside, upside down and all around). When played (there are scheduled performances throughout the run), you have a kind of cacophony provided by familiar samples from hip-hop tracks. I suppose it’s not an organ so much as a cheery robotic chorus.

The works are of that cozy-huge, big New York painting size (so the figures are close to life-size, if our proportions were as cartoonish at least). And the most complicated of them manage to link graffiti to earlier modes of subversion, the Neo-Dada constructions of Jasper Johns and Robert Rauschenberg. Where Johns explored the basic artistic tools of the studio (in works such as “Diver”), and Rauschenberg reflected the urban detritus surrounding city dwellers back at us, Os Gemeos see happy rainbows, shuttered windows, floral patterns and evocations of doors, windows, stairs, ceilings and trees. Their environment is thoroughly domestic, and even their New York subway scenes (surely a creative touchstone and inspiration for them) are more adorable than threatening.

They fit right in with the ICA’s long-standing agenda of giving a sympathetic outlet to outsider (or quasi-outsider, or once-outsider) art. They’ve done it before with Shepard Fairey, and have long supported the pointed cartoons utilized by Ellen Gallagher. With Os Gemeos, the real controversy is how anyone could see the playing child in the mural and not smile.