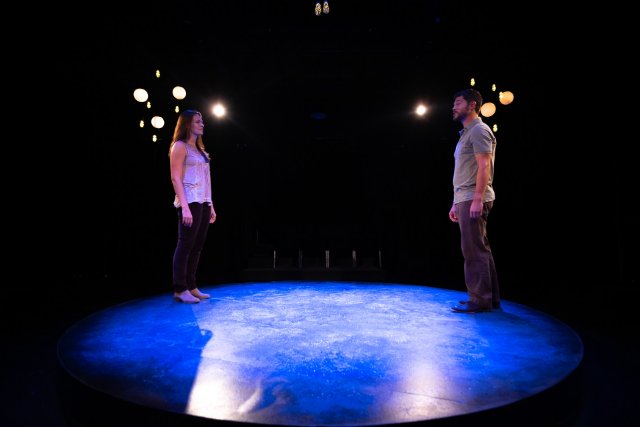 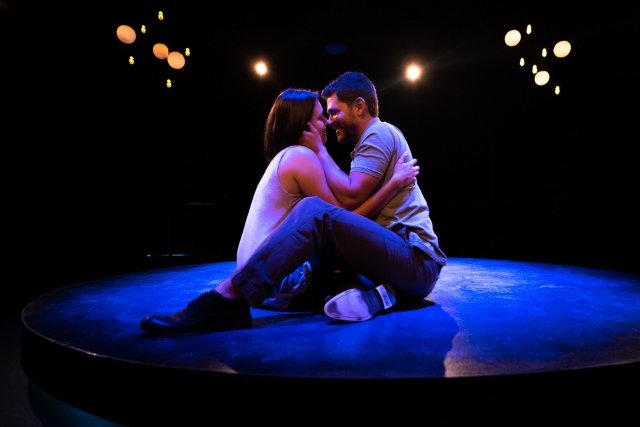 Photo by Ryan Arnst Jordon Armstrong, who plays Rolanda, and Jessica Schulte, who portrays Marianne, are convincing as a close couple in Constellations. 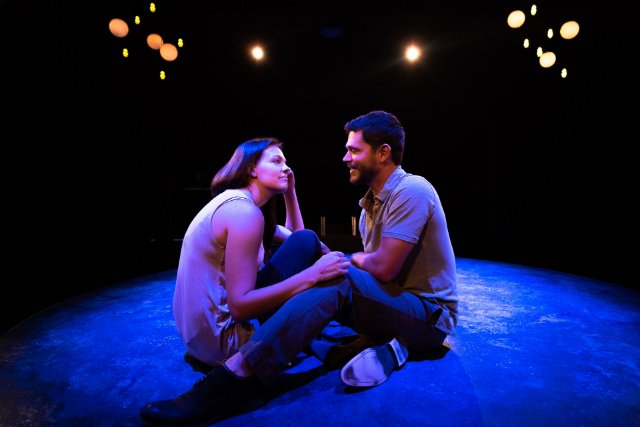 Photo by Ryan Arnst Marianne (Jessica Schulte) and Roland (Jordon Armstrong) grow comfortable and close with each other before a rift forces them apart in Constellations.

Or perhaps, at the same time, Hillary Clinton bested her Republican challenger in the popular vote and the Electoral College.

Maybe the race was too close to call. Therefore, the mud-slinging continued, with no end in sight.

Could all these scenarios have occurred together?

If you believe in the multiverse theory, each scenario exists within multiple universes.

But while the multiverse theory can be abstract and head-spinning, it can also offer a semblance of hope.

That’s especially true if you experience it through Nick Payne’s mysterious, touching, heartbreaking and sweet play, Constellations. This taut two-hander closes out New City Players’ 2018 season in an often-strong, but imperfect production.

In terms of form, Payne’s mostly accessible play isn’t linear. In fact, it sometimes feels as though you’re watching the 1993 movie Groundhog Day, with scenes seemingly repeated verbatim. But, there are variations, even if they’re subtle. That’s because each scene takes place in one of many universes that exist at the same time, according to the theory.

Payne, however, zeroes in on something much more intimate and personal than a presidential election. Indeed, his play focuses on a relationship and the number of ways it can potentially progress.

“At any given moment, several outcomes can co-exist simultaneously,” says Marianne, a physicist.

The possibilities criss-cross the stage with speed and suddenness. This swiftness helps keep our eyes and ears riveted to the bare, black, round stage.

Illuminated lights abruptly switch off, while another set rapidly turns on. Some lights are round, white balls, perhaps suggesting planets or moons. For the most part, somber scenes feature softer lighting and during brighter scenes, the lights are at their brightest.

In one of the most effective uses of lighting, single bulbs darken just as Marianne increasing reveals grave details regarding her cancer.

Sure, in one of the universes, there’s physically no hope for Marianne; she’s dying of a malignant brain tumor and is receiving palliative treatment. But her job as a physicist has given her a calming perspective.

The effects of her illness have made it hard for her to speak, but she’s a fighter.

“L-listen to me, please,” she requests of beekeeper and boyfriend, Roland. “The basic laws of physics-The b-b-basic laws of physics don’t have a past and a present. Time is irrelevant at the level of a-atoms and molecules. It’s symmetrical. We have all the time we’ve always had. You’ll still have all our time. Once I-Once-Once-There’s not going to be any more or less of it. Once I’m gone.”

Despite the subject matter, you don’t have to be well-versed in science to relate to the play or these characters. The above quote is about as technical as Payne gets. Instead of dry jargon, Payne writes with sensitivity and simplicity.

Choosing to focus on a relationship makes sense. Surely, many different scenarios can result.

The two meet at a party (or perhaps they don’t, in an alternative universe). Then, the pair fall strongly in love, but their situation grows tense as infidelities come to light – just who slept with another person depends on which universe you’re talking about. After a while, Marianne and Roland meet again, by chance. Then, a variety of situations occur — again, depending on the universe.

It’s no accident that Payne made Roland a beekeeper. As he explains, there are different kinds of bees, and there’s structure and order in a hierarchical system. Each bee has its job, they do it and their lives are quite short. The system is fleeting, unlike within the multiverse.

“Time is irrelevant at the level of a-atoms and molecules,” Marianne explains. “We have all the time we’ve ever had.”

While their outlooks might be different, the characters have obviously found enough commonalities to fall in love.

Under Mary Elizabeth Gundlach’s direction, Jordon Armstrong, as Roland, and Jessica Schulte, as Marianne, bond closely convincingly. The pair hold hands and lean on each other, making us believe they’re long-time lovers, or even spouses. Indeed, romance is in the air, which romantic music reinforces.

To be sure, there are plenty of heated exchanges. The performers are convincingly angry and riled up during these moments, and their acting doesn’t feel forced.

Moreover, Gundlach has helped the actors finds the right balance between heightened desperation and heat, quiet tension as well as tender, laid back romance.

However, there are directorial and acting issues. True, the stage is round and the audience sits in an in-the-round configuration. That will force us to see only the back of at least one performer during moments. Still, too often, Schulte and Armstrong have their backs to one side of the audience for too long. We need to see their facial expressions as much as possible.

In addition, there are moments when Armstrong speaks too quickly. Also, during some intimate scenes, the actors speak a bit too softly, making it hard to hear them. And when they’re talking over each other, it can be difficult to understand what they’re saying.

On the positive side, the actors alter their tone and position during scene changes (universe changes), without suggesting that either has become a different person.

Generally, Armstrong, with expressive, slanted eyebrows, endows Roland with a dreamy voice and countenance, as well as a winning charm. There’s a sincere look of concern and caring etched on his face as he listens to Marianne.

Schulte conveys a genuinely frightened disposition and seems on the verge of tears when she breaks the grave news regarding Marianne’s health.  There’s clear and convincing panic and desperation in her voice.

Also, both performers nail convincing British accents. While this production is seemingly set in England, it really takes place somewhere out in space.

Consider, for a moment, that the multiverse exists. If you’ve done or said something bad in one universe, you might have performed a good deed in another.

Now, that’s got to sound comforting.

New City Playres’ production of Constellations continues through Aug. 26 at The Vanguard Sanctuary for the Arts, 1501 S. Andrews Ave. in Ft. Lauderdale. Ticket prices range from $20-$35. Show times are 8 p.m. Thursday through Saturday as well as 4 p.m. Sunday. For more information, and to watch a trailer of the production, visit http://www.newcityplayers.org.