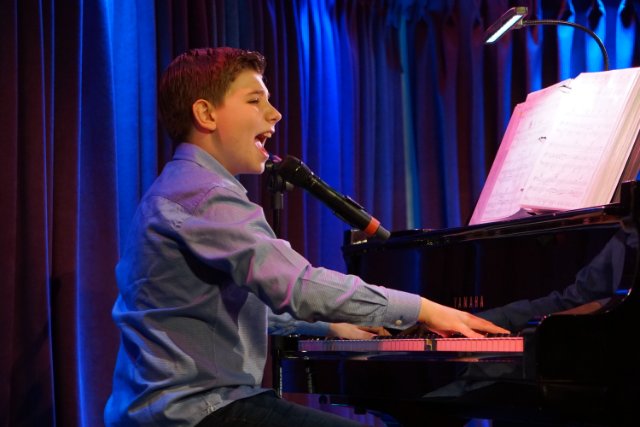 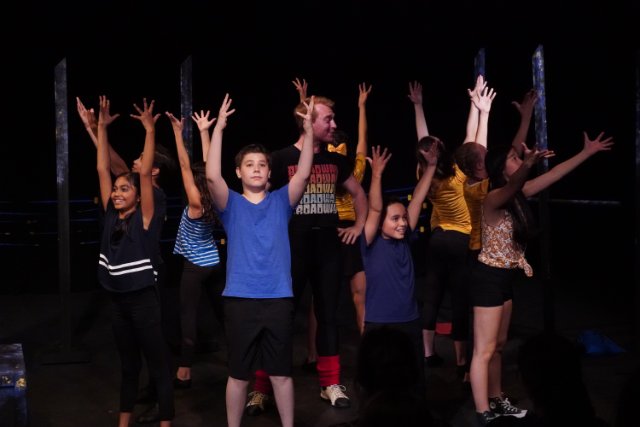 Photo by Lia Chang Joshua Turchin performs with other young actors in The Perfect Fit. 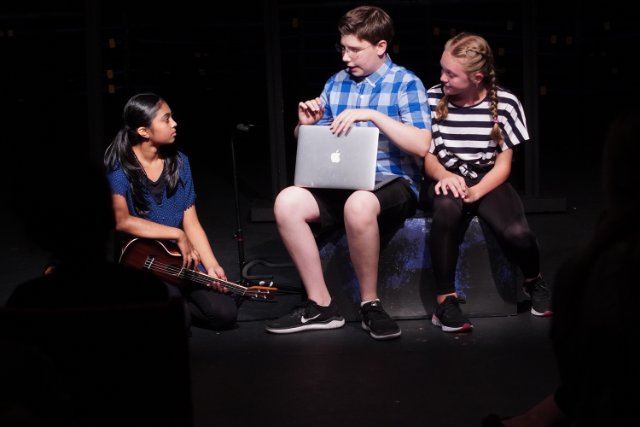 Photo by Lia Chang Joshua Turchin (middle) and two other cast members perform a scene from The Perfect Fit.

Joshua Turchin plays a dozen or so instruments. In addition, he wrote the book and lyrics, and composed the music, to an original, award-winning, Broadway-bound musical which wowed New York critics.

Also, he hosts The Early Night Show with Joshua Turchin. Further, he’s the musical director, accompanist, and host of the YOUNG Broadway Series, and founder of Broadway Kids Jam.

But the New York-based youngster, who is also an actor, would rather you not dwell on his age. Instead, he wants people to focus on his accomplishments. And there are many. For instance, Joshua recently released the cast EP of his musical, The Perfect Fit. The EP, or extended playlist, is available on platforms such as Amazon, iTunes, and Apple Music.

Recently, Joshua answered a series of questions about his background, why he enjoys performing, his future plans, and what inspired him to write and compose The Perfect Fit, his original musical. The following is a complete transcript of the interview, conducted via e-mail.

Aaron Krause: At what age did this all start? Please take me as far back as you can remember.

Joshua Turchin: I started playing piano as soon as I could reach the keys. That was my favorite toy. I started taking formal lessons around age 5.

AK: Did you learn to play every instrument that you play or did it all come naturally?

JT: I’ve always found it fairly easy to play most instruments. Some I taught myself, and some I’ve taken lessons.

AK: At what age did you start playing each instrument?

JT: My first instrument I played was piano. From there I picked up Ukulele and guitar around age seven or so.

When School of Rock (the musical) was coming around, I started taking drum lessons. I was probably around 10 or so when I first started playing. I started accordion lessons around then also.

AK: What is your favorite instrument that you play and why?

JT: My favorite instrument is definitely piano. It’s so expressive, and allows me to create lots of different types of songs. It’s also a really great outlet for me.

AK: Do you play by ear or only by notes?

JT: When I was probably 3 or 4, I started playing by ear. I thought it was important to also learn how to read music, so I can do both. I think I started sight-reading proficiently when I was around 11 years old.

AK: Does anybody in your family perform or play instruments? If not, to what do you attribute your talents?

JT: My parents play a little piano. My father said I passed his ability at around age four, but he can play a few chords. I’ve just always found a love for creating music. When I was four, I used rubber bands, some tape, a paper towel tube, and a box and actually created a guitar which could play some correct notes.

AK: Would you say your family has been supportive of your endeavors?

JT: My family has always supported me, especially my sister. She’s one of my biggest champions and I really love her.

AK: What led you to write and compose The Perfect Fit, and when did you create the show?

JT: I’ve always heard to write what you know. When I was around 10, I would hear different stage parents talking about their children, and other people’s children, and how there are few roles for children when they hit their teen years. They fall into a “dead zone,” where you are too old to play a child, but too young to play an adult. There are very few shows for people to actually play their own age as a teen. So, I thought it would be fun to write a show where there are lots of opportunities for teens to play teens, and to talk about the challenges of teens trying to figure out where they fit in.

AK: What were your hopes for the musical? Did you expect it to receive the kind of reviews that it has? What was your reaction to the accolades?

JT: I’ve been blown away by the response. I submitted it to Tony Award-winning producer Ken Davenport’s Rave Theater Festival last year as a blind audition. I was so surprised and happy when it got picked as one of only 20 shows of hundreds which applied, and I was the only child writer in the festival. We got such a great response from The New York Times, Wall Street Journal, NY Post, and won awards for Best Book and Best Ensemble in a Musical. It was amazing.

AK: Is the musical Broadway bound? If so, when can we expect it to play on the Great White Way?

JT: My hope is to bring the show to Broadway and beyond. I think this would be an amazing show for teens and adults to perform on Broadway, regionally, in high schools and throughout the world. We are continuing to develop the show and have productions being planned already!

AK: For those not familiar with your show, what it is about?

JT: After his parents move to the city, Jake, an awkward teen musical savant meets teen actors and dancers Alexandra and Elizabeth who are vying for a spot in a new musical, as their last chance of performing before they hit the ‘dead zone’. They face conflict with vindictive stage parents, self-discovery, and trying to figure out their own perfect fit in the world.

AK: What are the take-home messages that you want audiences to leave the theater with?

JT: I remember an audience member who saw the festival production ran up to me after the show and said, “This show just changed my life forever.” He had tears balling down his face. I think our audiences will have a lot of self-reflection on their own choices as parents and children, memories of childhood, and empowerment to take control of their own path in life.

AK: Is any part of the musical auto-biographical?

JT: I think there is a little biographical part of the show, but really there is probably a little of each of us in the different characters.

AK: Was it difficult to create the EP? Please take us through the process.

JT: It was definitely a challenge, but we learned a lot. We were slated to do a full studio recording with Broadway Records this summer until the magic of COVID paused Broadway. Rather than put things on hold, we figured out a way to record a number of the songs entirely remotely. We worked with the different actors and had all of the musicians and actors record their tracks separately, then mixed and mastered it all together. It was a lot of fun to do.

AK: Where can people get it?

JT: You can buy The Perfect Fit Remote EP on iTunes at https://music.apple.com/us/album/the-perfect-fit-the-musical-the-remote-album/1522929307 and on Amazon Music at https://www.amazon.com/Perfect-Fit-Musical-Remote-Album/dp/B08CSQXLYL/

AK: Do you plan to write more musicals/plays?

JT: I (will) write more musicals. Sometimes I’ll come up with the melody first, sometimes the lyrics, but I love telling stories through music.

AK: Talk a little bit about The Early Night Show with Joshua Turchin and what led you to create that show.

JT: The Early Night Show started as a live musical comedy variety cabaret series I created in New York City featuring guests from Broadway, TV, and film. I planned on doing another show at The Green Room 42 when Broadway shut down. With so many people out of (work) within the entertainment industry, I thought it would be great to create a virtual version to support The Actors Fund’s emergency relief fund.

AK: What are your thoughts about viewers’ reception to it?

JT: We’ve had such a great response to The Early Night Show – Virtual Edition. Broadway Podcast Network picked it up, so viewers can now listen to it wherever podcasts are found, like iHeartRadio and iTunes. (You can watch episodes at https://www.theearlynightshow.com/or https://www.youtube.com/channel/UCv_QF3QVrYsROd2jTpe1u1A).

AK: Of all the shows in which you’ve performed, do you have a favorite and why does it stand out for you?

JT: It’s like picking your favorite child, but I’d have to say Forbidden Broadway: The Next Generation was one of my favorites. (Joshua is now the youngest cast member, and only child, ever to perform in Forbidden Broadway’s 38-year history). I got to originate the part and helped create so many fun characters. I’d also say that playing Flounder in The Hollywood Bowl’s Live-To-Film production (of The Little Mermaid). It was also an amazing experience getting to meet Alan Menken and working with Harvey Fierstein, Peter Gallagher, Lea Michelle, and so many other really talented actors and musicians.

AK: As busy as you are, do you have time to just “chill out” and be a kid? Aside from performing, what are some your hobbies?

JT: Performing and writing music really are my hobbies. When I’m not working, I love to write. I’ve actually been writing some original music for a concept musical of Avatar: The Last Airbender, which I’ve been posting on my TikTok @joshuaturchin. I’ve been getting thousands of views already, which is pretty crazy.

JT: I would love to keep composing and performing. I do plan on going to college, but music is my passion.

AK: What advice would you give to someone your age or younger who aspires to perform?

JT: Just be yourself. It’s not about getting the part. A lot of people put pressure on themselves during auditions that they have to get the part, but that’s not really the whole picture. I think of auditions as a chance to have fun, meet new people, and show them what I can do. Sometimes you are not right for that part, but someone in the room saw something in you that may want them to cast you in something different. If you don’t get a part, you just weren’t the right fit for that role, but there will be something better out there for you.

AK: Do you have a dream role and why do you desire so strongly to portray that character?

JT: I would love to play Evan Hansen one day. I got to originate the role of “Evan Has-Been” in Forbidden Broadway: The Next Generation, but it would be fun to play the original character.

AK: Why do you like to perform and how does it make you feel?

JT: I love diving into characters and telling other people’s stories, and seeing audience reactions while I perform.