Who Put the Chutzpah in Broadway? 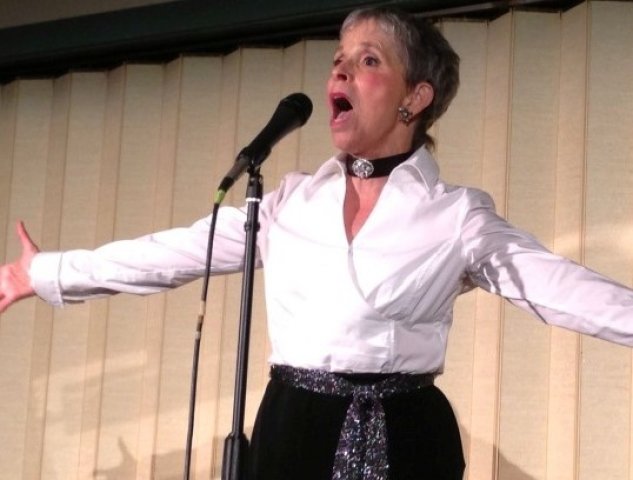 Coachella Valley music producer Les Michaels is known for presenting new and favorite Cabaret musical artists through his popular “Sundays In Summer Series”, performed in the Arthur Newman Theater, at the Joslyn Center in Palm Desert.

Michaels is smack dab in the middle of his 9th season of producing cabaret concerts featuring singers and song stylists from Los Angeles, Chicago, as well as musical artists who now reside in the Coachella Valley.

Last Sunday, August 5th, I got an opportunity to catch Sydney Weisman in her new show “Who Put the Chutzpah in Broadway?”  It’s a loving tribute to the men and women of Broadway.  They compose the music and write the lyrics that make the young girls cry, the middle-aged reach back into their memories, while the gray-headed crowd’s eyes tear-up. They are remembering and asking themselves where have all the flowers and their lives gone?

Sydney, aka, ‘Little Miss Broadway’ selected the musical numbers that comprise her show, along with musical director and legendary piano accompanist Barney McClure. Together they weave a nostalgic musical tapestry of songs that have endured for years.  Sprinkled with specialty numbers, some of which were strangers to me, but highly entertaining to the packed audience at the Arthur Newman theater, once again demonstrates the staying power and relevance of great artists and their work even after 90 years.

Ms. Weisman is a song stylist who also delivers insider stories about the songs she shares with her audience.  She’s petite, has a warm and winning smile that immediately engages her audience and where we find ourselves eagerly waiting to hear her sing her next song and share another anecdote. The show titled “Who Put the Chutzpah in Broadway?” is a ‘love valentine’ to the talent and creativity of Jewish writers and composers of the 20th century, who literally changed the face of the American Broadway musical with their innovative and enduring music and lyrics.

I had the opportunity to chat with Ms. Weisman following her performance.   When I asked her what is your favorite song in the show? she leaned back in her chair and really thought about it. “It’s difficult because I really like every one of them”.  I waited … “but I have to admit my heart favors the music of the Gershwin Brothers, George, and Ira.” Then leaning forward, says with conviction and passion, “Just listen to the first nine words of their ‘Our Love is here to Stay’ song that I sang this afternoon.  ‘It’s very clear’, just sums it all up for me. Love is eternal.”

I think it’s safe to say that love is the most powerful emotion on the planet; hands down. It’s the favorite emotion of all creative artists.  Pressing Ms. Weisman further, I asked what about some of the other songs, like “The Christmas Song” that is replete with humorous, gentle, fun-poking lyrics concerning the commercialization of the Christmas Holiday Season. Smiling she says “Well, we all need some humor in our lives, just to get through life’s “rough times” came the answer.  Words to live by indeed.

Her program featured fourteen musical numbers – some iconic and some that have disappeared from the radar screens of the American Song Book performers – but none-the-less are worthy of listening once again. A couple of my favorites from her show were a heart-tugging, haunting, rendition of Kurt Weill’s “Lost in the Stars”; Melissa Manchester’s emotionally-redemptive song “Come in from the Rain”; and the clever upbeat tune and lyrics of “Everybody Wants to be Sondheim”, written by Alan Chapman, LA-based radio Host of KUSC Classical radio, who also doubles and triples as a Ph.D. educator, producer, and pianist; brought the Joslyn theater audience house down.

P.S.  I finally coerced her favorite number of the afternoon’s performance.  It was her take on Frank Loesser’s “If I Were a Bell”, from “Guys and Dolls”.  It was a fun-filled afternoon of memorable songs.

If you discover an up-coming performance of Sydney Weisman performing her one-woman show “Who Put the Chutzpah in Broadway”, in Southern California, make sure you check it out.