A Conversation With Kahn and Furr 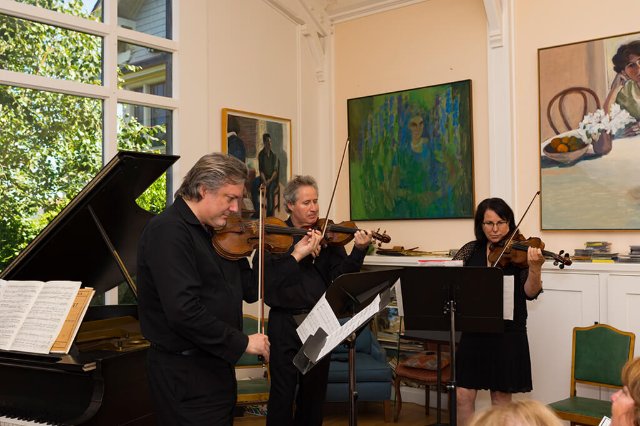 Musica Marin, with four years of producing chamber music for audiences of 60-80 guests in residential settings makes a big leap. September 21-23, 2018, they present the inaugural Musica Marin Festival in beautiful Tiburon and Belvedere. We had a chance to talk with Founder and Artistic Director Ruth Ellen Kahn and Culinary Director Mark Furr about the exciting event.

Vic & Karin – Ruth, tell us a little about Musica Marin and why you felt it important to offer this kind of exposure to music lovers.

Ruth – What draws me to chamber music is its intimacy and its urgency, with artists and audience almost as one. As I thought more about what chamber performance offers, I perceived the spectator as having a front row seat and a back stage pass. The audience is so close that they see the musicians’ fingers moving on the strings and their eyes communicating with one another, creating much stronger emotional contact than in a symphony hall. Rather than the formality of a curtain falling at the end of a performance and everyone dispersing, audience and performers mingle as old friends. But the enriching dimension that we’ve added is world class cuisine and wine orchestrated by our culinary director, Mark Furr.

Vic & Karin – You do make it sound enticing! What’s in it for the performers?

Ruth – It’s thrilling for them as well. Obviously, the “face time” for each artist exceeds what they would have in a symphony. Their parts are relatively more important and perceptible to the listener, so it’s more involving. Plus, they have more personal contact with fellow artists and with the music lovers in attendance. And the perks aren’t bad. They share in the sophisticated culinary offerings and the ambiance of special venues. For our visiting artists, it’s a chance to spend a few days in our wonderful San Francisco Bay Area.

Vic & Karin – So what about the venues for the festival? You’re reaching out in a new direction, aren’t you?

Ruth – Yes. For the festival idea to work, we knew that we would need spaces that would offer 150-200 seats. So our main performances will be at the imposing, eclectic St. Stephen’s Church. Other Tiburon/Belvedere venues are the charming clapboard Victorian Gothic Old St. Hilary’s Church, a private nine-acre Tiburon estate, and for the Founding Festival Members, a yacht. We are excited that our patrons will soak in the magical atmosphere and acoustics of the churches and the uniqueness of the other venues. In addition, the beauty of the Bay is all around.

Vic & Karin – So that brings us to the “what it’s all about.” Can you tell us a little about the artists?

Ruth – With pleasure – and with a little pride as well. We have attracted renowned instrumentalists from far and wide. Coming from New York, the crème de la crème among violinists is the legendary Stephanie Chase who has soloed with many of the finest orchestras in the world. From Lugano, Switzerland, we will have Trio Giacometti, newly formed, but with artists who have performed together and as soloists in Europe. We will also showcase celebrated cellist Jeffrey Solow from Philadelphia. From the Bay Area we will have the talented harpist Krista Strader, two more violinists to be named, and myself on the viola.

Before I mention the other two artists, I want to acknowledge the person who introduced me to both of them and who is collaborating with Musica Marin for the fourth time, Michael Colbruno. New York City based Clint Borzoni is our composer-in-residence, and we will perform some of his works. For Clint’s vocal pieces, we are pleased that Italian-German opera star Marco Vassalli will join us.

Vic and Karin – Wow! What an opportunity for attendees to see such an array of performers from all over the U.S. and Europe. We note from the program that various configurations of musicians will be performing Mozart, Sibelius, Barber, Bach, Brahms, and Mendelssohn. That’s pretty much a Hit Parade of chamber music composers.

Shifting gears, it sounds like you’re making a great investment in the Festival. What can patrons expect in terms of paying to enjoy this unique assemblage?

Ruth – All performing arts seek special financial support to make great works and artists available to the public, and this is no different. We have established a special patron category of Founding Festival Members in which generous music lovers help us cover costs and receive special benefits in return. In addition to events that are limited to Founding Festival Members, we will have four separate ticketed events. The special assistance from these donors means that we can offer tickets for two events starting at $45 or $50. The two events that include food and wine are appreciably more.

Vic and Karin – We’d like to get into more detail about the program, but Culinary Director Mark Furr is about to join us, so if you don’t mind, we’ll have another interview session to probe the music side some more.

Mark – Happy to be here.

Vic and Karin – We know you are a restaurant veteran, including Radius and Broken Record and that you’ve had “Best of Bay” and Zagat recognitions as a chef. How did the idea of combining fine music with fine cuisine as a distinguishing feature of Musica Marin come about?

Mark – It seemed so natural. Both involve artistry in the making and discriminating taste in the consuming. You could say that a chef makes music in the kitchen. Especially here in the Bay Area, we have an abundance of talent in both. Ruth and I felt that there would be a market here that would appreciate the kind of special treat that comes from the marriage of music, food, and wine in special settings. The proof of the pudding – that’s chef talk – is the successful events we’ve had to date.

Ruth – And I would say that adding food and wine elements to spectacular locations make it more interesting for younger people to give chamber music a try. We’d really like to help attract a broader age group to classical music.

Vic & Karin – Are there any special challenges associated with organizing the food for the Festival?

Mark – Well, to begin with, we have to operate in multiple locations, each having its own resources, layout, and logistics issues. The scale is two to three times larger than our single events in the past, which means more of every task. The good news / bad news is that I’ll be organizing the creations of several guest chefs, so we’ll have more creative power, but more to coordinate.

Vic & Karin – What about the menus? What sumptuous delights will attendees have to look forward to?

Mark – That will have to be a surprise. I like to work with the best available ingredients, and you never know from one day to the next what exciting shipment will show at the markets. My one promise is that guests will not be disappointed.

Vic & Karin – We’ll have to close on that note. Thanks for sharing your time with us. Ruth, we look forward to talking about the program in more detail and to involving Clint Borzoni in that discussion.