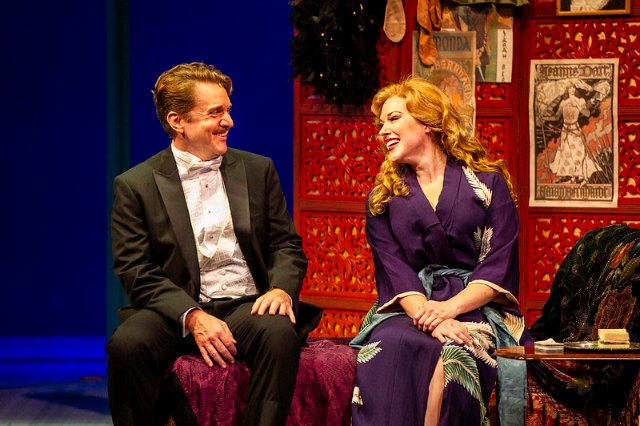 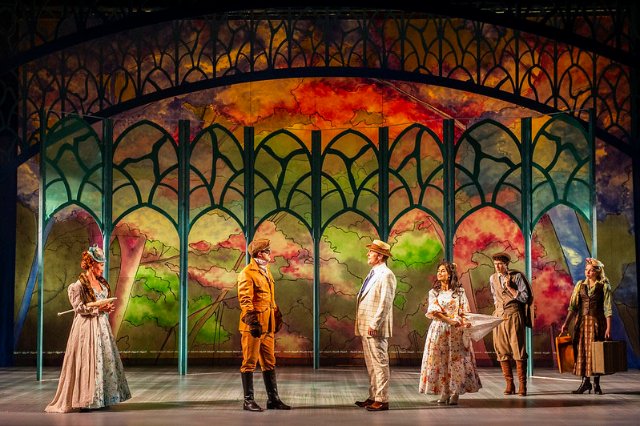 A pastel set with splashes of color. 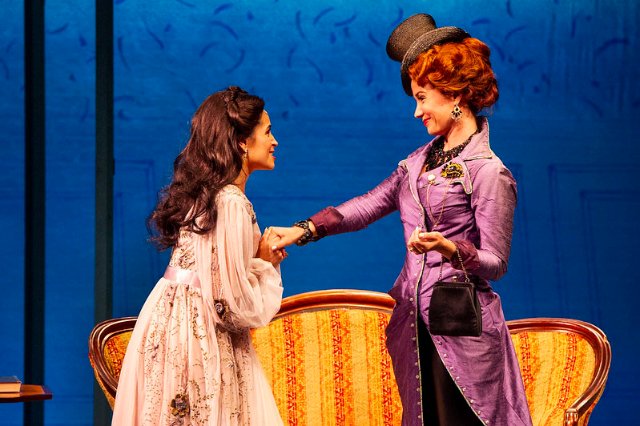 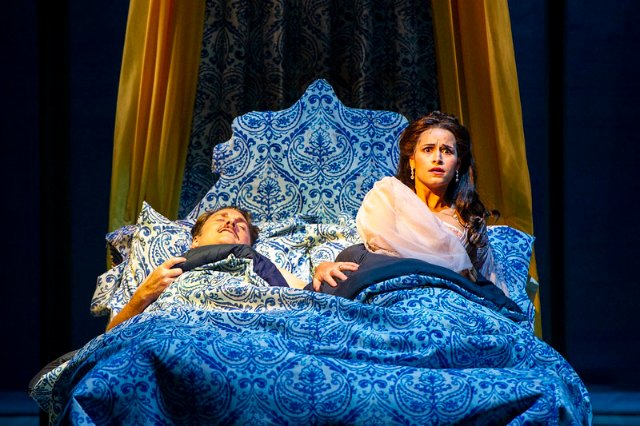 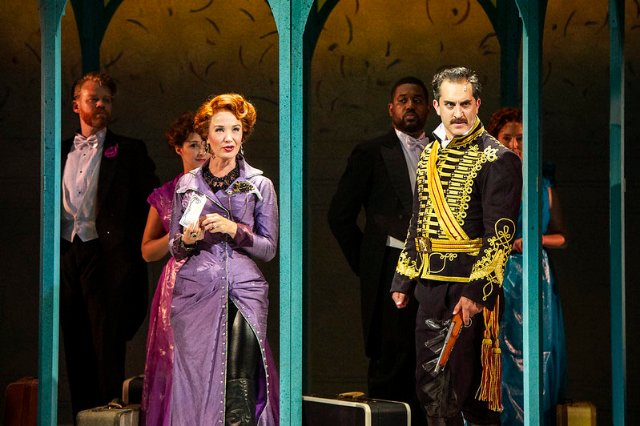 For retiring founding artistic director, Julianne Boyd, she has directed a stunning production of Stephen Sondheim’s A Little Night Music. The opening night audience was utterly thrilled and charmed.

That she ended an epic, singular, and spectacular career with Sondheim comes as no surprise. Barrington Stage Company has a long history of producing the work of the greatest Broadway composer of his generation who died at 91 last November. He had Berkshire roots having attended Williams College.

The company was co-founded in 1995 by Artistic Director Julianne Boyd, and former Managing Director Susan Sperber in Sheffield, Massachusetts. Initially performing in a school auditorium, under Boyd, the company now occupies an expanded campus in Pittsfield with two theaters and administrative/ rehearsal buildings.

For her last production Boyd has pulled out all the stops. There is utter perfection in all aspects of this staging which starts with a spectacular cast and an array of stunning actors. Add to that a gossamer, enchanting, ephemeral modular set by Yoon Bae, and subtle, effective lighting by David Lander. Sara Jean Tosetti has dressed the cast with a broad palate of color and texture. They evoke Swedish upper middle class circa 1900.

Add to that the dream team of musical direction by Darren R. Cohen and choreography by Robert La Fosse. Yet again they bring their magic to Barrington Stage.

It is the music and Sondheim’s deft, challenging and complex lyrics that will have you swoon with delight. It takes particular skill to sing Sondheim where songs tend to be philosophical soliloquies with many twists and turns.

But this musical has the paradigmatic song that is crystal clear “Send in the Clowns.” We were thrilled to hear it and Emily Skinner as the actress of a certain age, Desiree Armfeldt, rendered it lusciously hanging on every ironic twist and turn. That resulted in thunderous applause.

The musical was adapted from the 1955 Ingmar Bergman comedy Smiles of a Summer Night. Which, in turn was a nod to Shakespeare’s Midsummer’s Night Dream.

As Madam Armfeldt (Mary Beth Peil) explains to her granddaughter Frederika (Kate Day Magocsi) she must look for three smiles on this summer’s night. At Desiree’s request she has asked her mother to host a “Weekend in the Country” inviting her old lover the attorney Frederick  Egerman (Jason Danieley) and Anne (Sabina Collazo) his 18-year-old virgin bride of eleven months.

Her other lover, the pea-brained, macho Count Carl-Magnus Malcolm (Cooper Grodin) and his wife the Countess Charlotte (Sierra Boggess) crash the party. He is hell bent on claiming Desiree as his alone and challenging his rival to a duel.

All of this is set to a waltz with a chorus of five attired in evening wear weaving in and out of the plot. Frederick is navigating a sea of troubles. As Desiree astutely points out he is having a midlife crisis signified by his silly little wife. She is played quite deliciously by Collazo and it is easy to see why he is so smitten.

Then there is the matter of his ridiculous son Henrik (Noah Wolfe) a cello playing, religious fanatic intent on the ministry. Everyone makes fun of this silly Billy.  While shunning sin and temptation he is nonetheless seduced by the free-thinking maid Petra (Sophie Mings).

All of the characters have their special moments and iconic songs. The rival men have wonderful lyrics, Frederick to Desiree “You Must Meet My Wife” and Carl-Magnus “In Praise of Women.”

Woven into the musical is a treatise on love and the process of age. We see the young love of Anne and Henrik. The foibles of middle age with all of its pent up jealousy, rage and passion. The songs have paradigmatic Sondheim wit and insight.

Then there is the heart wrenching wisdom of age as Madam Armfeldt recalls her many loves to the young Frederika.

At the end of the first act all join in for the anthem “A Weekend in the Country.”

There are more shenanigans as the rival men ignore their wives, with interesting consequences, to pursue the heart and hand of Desiree. In a meeting with Frederick there is reverie of what might have been with “Send in the Clowns.” The fantasy is to marry and legitimatize Fredrika. When he realizes the daughter is his own she states that there have been many Fredericks but we know better.

It’s a bit madcap as the second act sorts out all the improbable matches. The tarty Petra has a fling with the butler staged quite flagrantly. Having had her fun she is ready to settle down with “The Miller’s Son.”

Frederick survives the duel, Russian Roulette. We hear the shot fired off stage and he is dragged out seemingly wounded. But the Count is miffed that he missed and only damaged the tip of an ear.

So there is a wonderful finale and everyone gets what they want. Particularly a delighted audience. We left with smiles on a summer night.