The Originalist at 59E59 Theaters 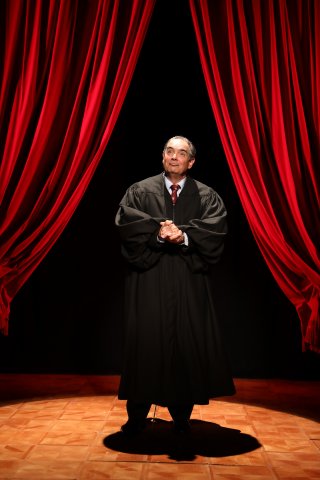 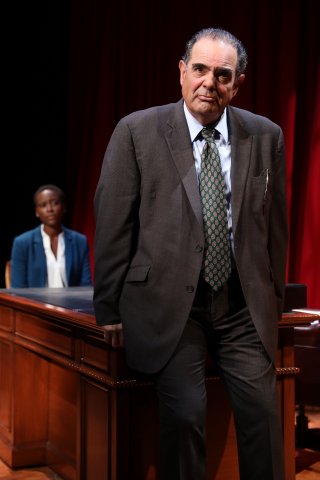 Gero as Scalia with his clerk played by the feisty Tracy Ifeachor. 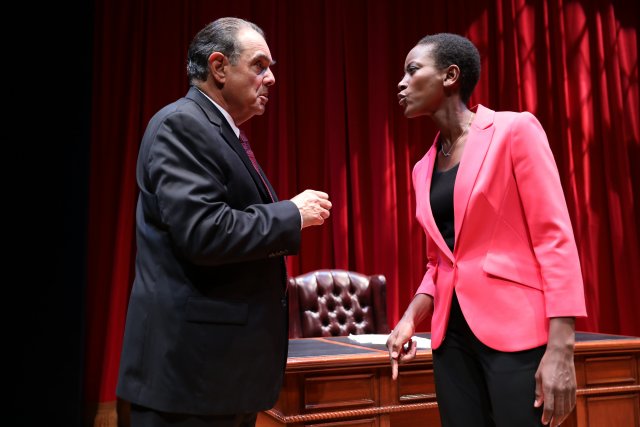 The battle is on between the originalist and the flaming liberal.

Antonin Scalia is the subject of The Originalist, a powerful play by John Strand and directed by Molly Smith. It is presented by Middle Finger Productions in association with the Arena Stage and running at 59E59 Theaters. Edward Gero plays Scalia.

The Justice, robed, opens the show conducting La Traviata as its music fills the theater. We saw him often at the Kennedy Center, attending performances with his seat-mate on the court, Ruth Bader Ginsburg. Anyone who loves opera has a soft spot for the seemingly hard-headed and hard-hearted Justice of the Supreme Court.

Ruth Bader Ginsberg who shared his passion reports that this play closely resembles Scalia, who she liked very much, but vociferously disagreed with on Court matters. She attended this play with a posse of twelve marshals, an expanded retinue for a production in which many gunshots are fired. In the drama, Justice Scalia has persuaded his super liberal clerk to take up target practice to get the feel of 2nd Amendment issues.

The playwright has created the clerk as a composite character who reflects the Justice’s predilection for hiring as clerks, flaming liberals at the opposite end of his political spectrum. Scalia liked passionate arguments in his chambers. He wanted to battle, in private and behind closed doors in the spirit of Omertà, the Sicilian code of silence into which he was born.  His clerks, adamant advocates for the opposite point of  view, would try to persuade him on cases he would later have to decide. In the hands and voices of two gifted actors, the playwright’s witty and impactful dialogue takes a turn at every exchange.

Gero is marvelous as the Justice. Provided with a script full of witty repartee on the most important issues of our time, Roe v. Wade, DOMA, and affirmative action, Gero may not persuade an audience to change their minds about gay marriage, but he certainly helps us understand the man and other decent conservatives. In this age of gaping schisms and tall walls, honorable people can differ. A civil middle is possible, or was.

Scalia’s new clerk Cat, a black woman who made Harvard Law Review, is the feisty Tracy Ifeachor. Not surprisingly, Ifeachor started her career with The Royal Shakespeare Company. When the Justice asks why she applied for the job, she reports she did it on a bet when she was drunk. Whether or not this is true, the Justice is enjoying his adversary. The sparring has begun.

Scalia instructs not only on guns, but on The Soul. Heaven, he says, may not be visible, but you can hear it in Mozart. During the course of the performance we hear “How Lovely is Thy Dwelling Place” from the Brahms’ Requiem, and significantly, Donizetti’s “Una Lagrima Furtiva.” This sole small tear is heard in Scalia’s dissent in Obergerfell v. Hodges, which made gay marriage possible. He has accepted Cat's softening of the dissent.

Two handers have a special intensity, but this one, in which a third character is introduced briefly toward the end, has the geometrically-increased impact of large issues and large personalities. The wit delights throughout the play, and helps soften us to look at Scalia the man. He was the son of an immigrant who taught literature at the University level. Scalia desperately wanted to be Chief Justice, and was denied because Dick Cheney said it would be like a second invasion of Baghdad.

Some have said The Originalist whitewashes Scalia. Yet the author’s intention is clearly to show that there is a middle ground among reasonable people. The play was written before the divide was carved between the decent and the indecent. Clearly Scalia falls on the decent side today. The Originalist is thoroughly engaging theater.